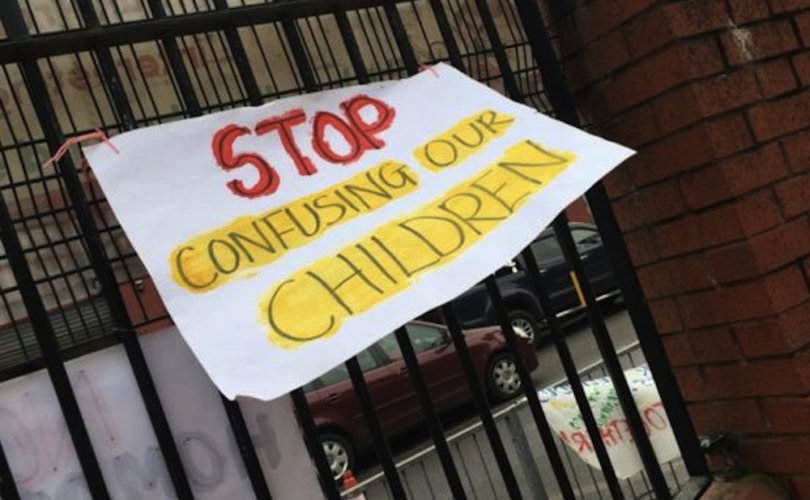 BIRMINGHAM, England, May 9, 2019 (LifeSiteNews) — A mediator has been designated to negotiate between the Birmingham city council and parents concerned about their children in a debate over a controversial LGBTQ curriculum.

Nazir Afzal, an experienced attorney and former lead on child sexual abuse for the Crown Prosecution Service, has been asked by the Birmingham city council and parents to guide them to a resolution on a volatile dispute over the controversial “No Outsiders” program that parents assert promotes the LGBTQ agenda.

After weekly protests over the lessons at Parkfield Community School in the Saltley neighborhood in Birmingham, the curriculum was suspended until a resolution can be reached. The lessons have also been temporarily suspended at four schools operated by the Leigh Trust in Birmingham.

I can confirm that the city council & parents have asked me to mediate in this matter
I don’t want payment
I don’t propose to give a running commentary.
I would prefer if nobody did so that we can try & make progress for the children at the heart of thishttps://t.co/y9Qu56RkYq

Afzal confirmed that he has spoken with parents of Birmingham students, tweeting May 5: “I can confirm that the city council and parents have asked me to mediate in this matter. I don’t want payment. I don’t propose to give a running commentary. I would prefer if nobody did so that we can try and make progress for the children at the heart of this.” Afzal is Muslim, as are many of the concerned parents in Birmingham.

The former prosecutor may also become controversial after it was revealed that in April he said that students “don’t become gay because they learn about the fact there are gay people,” and affirmed that pulling the LGBTQ curriculum was “scandalous.” After a conference in Bradford on the sexual exploitation of children, Afzal said cancelling the LGBTQ lessons does children “no service at all and no good at all” and school environments should be used “as somewhere they can learn things that they wouldn’t learn anywhere else.”

Claiming that failure to teach kids about sex could lead to grooming by sex traffickers, Afzal said, “Today I’ve been talking about how British Pakistani men are disproportionately involved in some of the street grooming.” He said this was because they had no “relationship education” in the younger years. “Our families, sadly, are averse to allowing their children to understand relationship education. And relationship education is a real way of protecting them in future.”

One concerned parent, 32-year-old Shakeel Afsar, was warned by police that he may face sanctions after faculty at a school in Birmingham claimed they were intimidated by him. Afsar had protested outside a primary school for more than a month, joining others in chants of “Adam and Eve, not Adam and Steve,” and “Our kids, our choice.” Protesters have demanded the resignation of Sarah Hewitt-Clarkson, head teacher of Anderton Park primary school, which offers LGBTQ curriculum and books.

Teacher Andrew Moffat, who started the “No Outsiders” lessons at Parkfield Community School in Birmingham, will lead the annual gay pride march in the city. According to the BBC, Moffat is “overjoyed” by the invitation to lead the parade on May 25.

“The message I want to give is that it's not a case of Muslims versus LGBT or different cultures not getting along,” he said. “The great thing about Birmingham is its diversity and that we can all get along.”

Protests against the lessons are spreading, but Birmingham city council claims that the lessons “present a threat to the innocence of children are unfounded and misinformed.”