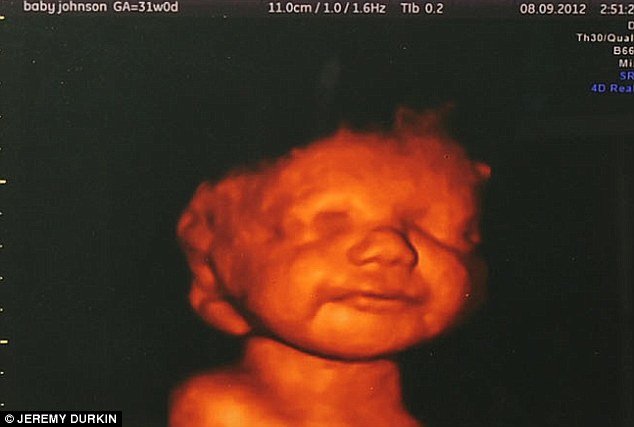 TELFORD, UK, January 15, 2013 (LifeSiteNews.com) – The parents of a child diagnosed with a severe malformation rejected advice to abort him after they saw their baby smile, blow bubbles, wave his arms and kick during a 3D ultrasound scan at 20 weeks of life.

Katyia Rowe and Shane Johnson were told that their son Lucian's brain was not developing normally and that he would be seriously disabled. Katyia was advised she could abort Lucian up to 24 weeks gestation.

“We were devastated to be told our son’s brain abnormalities were so severe they were life limiting and we should consider a termination,” the couple told the Daily Mail.

“Further scans were arranged to assess the extent of his disabilities but when I saw him smiling and playing inside me I knew I couldn’t end his life,” Katyia said.

She explained that “Despite all the awful things I was being told, while he was inside me his quality of life looked to be wonderful and no different to any other baby’s, he was a joy to watch.

“I was told he would never walk or talk yet the scans showed him constantly wriggling and moving.

“As I watched I knew that while I was carrying him he still had a quality of life and it was my duty as a mother to protect that no matter how long he had left, he deserved to live.”

Lucian was born on October 23, 2012 weighing 6 lb 10 oz. His father Shane said that after Lucian was born, doctors whisked him away and tried to put the child on a ventilator, without success, and scheduled tests and x-rays.

Katyia recalled that she “was shocked, but we had already decided that after his birth we would let Lucian lead the way. I didn’t want him given any unnecessary treatment if ultimately it wouldn’t help him.

“He had already given me the greatest honour of being his mummy for the last nine months. It was up to him now if he was ready to go.”

“They worked on him for 4 hours, [then] came in advising he only had minutes left to live,” Shane related on a website he and Katyia created in memory of their son.

The couple rushed to Lucian's side and finally the son she had nurtured for nine months was placed in Katyia's arms.

Katyia said, “It was without doubt the happiest moment of my life. Lucian could have died at anytime in my womb but he held on long enough for us to meet properly.

“My son looked utterly perfect. The love and joy I felt the moment they put Lucian in my arms told me it had all been worth it.

“I thought I didn’t want to be a mother but Lucian taught me it is the most wonderful job in the world and I will always be grateful for that,” Katyia added.

Shane said that he and Katyia could see Lucian's struggle for life diminishing. Lucian died in his mother's arms nine hours after he was born.

“The peace, contentment and amount of pure love that engulfed the 3 of us in that room will keep us moving forward for the rest of our lives,” Shane said. “We're so thankful to have had that time with Lucian for those few hours and words can’t describe just how proud we are to be the parents of such a beautiful, strong willed little boy who through our tears, stories and memories will live on in our hearts forever!”

Visit the website created by Lucian's parents and dedicated to his life to read the full account of their son's life and death.