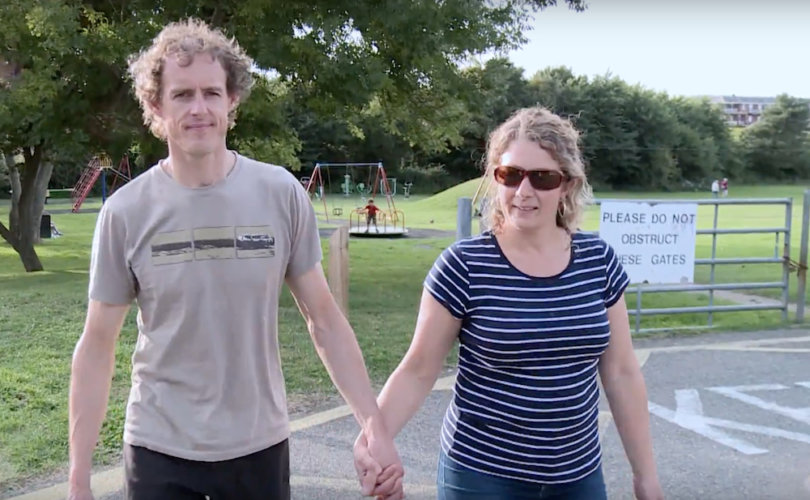 ISLE OF WIGHT, England, September 21, 2017 (LifeSiteNews) — The UK parents who pulled their two young sons from a Church of England school because of a government-funded push to normalize “transgenderism” have faced continued contempt for speaking out.

Nigel and Sally Rowe have received hate mail and been the subject of intense public criticism since voicing their concerns publicly.

Sally Rowe said she is “scared stiff” from the campaign of hate being conducted against them, the Daily Mail reported, and she is terrified for her family’s safety.

“This transgender agenda is almost like a trendy thing that’s infiltrating schools, and if you don’t subscribe to it you are a bully,” Sally said. “The hatred we’ve received is … is … ”

Struggling to get her words out, she said, “This is painful for us, really painful. We’ve been so churned up. This is our community, our friends and now … now … ”

Sally Rowe’s phone has chimed with nasty texts in the wake of the couple going public and bringing legal action against the school, claiming it is inappropriately applying a 2010 anti-discrimination law. Nigel Rowe has gotten numerous “vitriolic phone calls and emails,” the report said, and “he looks as if he’s barely slept a wink in the week since announcing their legal challenge.”

The Rowes have two sons, ages six and eight.

When a boy in their older son’s class announced two years ago in a Show and Tell lesson that he had decided to be a girl and wanted to be addressed by a girl’s name, the Rowes, who had a close friendship with the boy’s parents, opted to not make an issue of it.

They later pulled their son from the school because the other boy’s actions were confusing and stressful to their son.

In a second case in their younger son’s class, though, another boy decided to come to class sometimes as a girl, sometimes as a boy. This time, however, they felt the situation was asking too much of very young children.

“This boy in our youngest son’s class, who’s six at the moment, decides one day to be a girl and the next to be a boy,” Nigel Rowe said.

“One night I was putting the boys to bed,” he continued, “reading them a bedtime story and having a little chat as we do every night, when my son said, ‘Daddy, I’m confused. How can — let’s call him Peter — be a boy one day and a girl the next?’ It was really upsetting him. At least if the child was a girl all the time you’d have some chance of explaining.”

The couple wrote to the school, unnamed for legal reasons, expressing their concerns, and received a letter in reply about transphobic bullying. They felt they had no choice but to do what they’ve done in terms of bringing legal action against the school.

The Rowes contend the school is misapplying the Equality Act 2010 and that it does not pertain to individuals under age 18. They say government-funded programs and influence by special interest groups are pushing an “ideology of transgenderism” in schools.

“There’s a social agenda with this pushing of transgenderism among young children in schools,” Nigel Rowe said in a report from The Sun. “Why are they doing this?”

“It feels like they’re trying to create a new social construct,” he said.

The Rowes say the school took advice on transgender policy from the Tavistock Clinic, Britain’s only NHS unit specializing in child gender issues, and Mermaids, a charity that lobbies on behalf of transgender issues.

“We are challenging the education authority and the diocese on the guidelines they’re giving,” he continued. “We believe they’re quoting from laws [the Equality Act 2010] that don’t apply in this situation. That’s because the age of when someone is legally recognized as transgender is 18.”

The couple was told by school leadership that the child decides on gender. “If the child wants to come in one day as this, one day as that, we have to do that,” the school head saying if she didn’t comply she could lose her job.

Sally Rowe said they have gotten some supportive texts from families within the school, other schools on the island, the mainland and even abroad. But she added, “I think most parents are scared to communicate with us or show allegiance to us.”

“We’re trying to keep a low profile,” she said. “The people who are lovely and supportive have told us to keep off social media. There’s been a torrent of nastiness. It does churn us up. It does affect you, the foul language, the ranting down the phone. Nigel’s tummy has been in knots since last Saturday.”

“I don’t understand it,’ Nigel Rowe added. “When you go to hospital and your child is born, they lift them up and say: ‘It’s a boy’ or ‘It’s a girl.’ That’s the way it’s been for centuries. Why is there now such a social agenda to change that?”