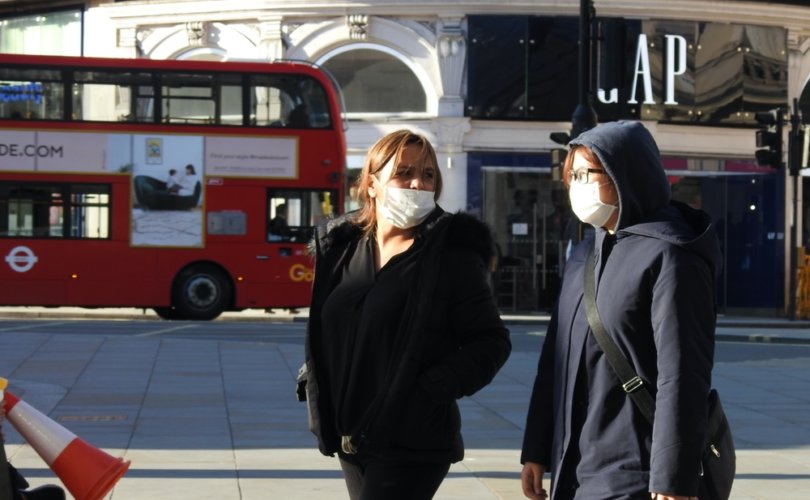 LONDON, England, April 17, 2020 (LifeSiteNews) ― The National Police Chiefs Council and College of Policing have published their guidelines to what the beleaguered residents of England may or may not do when they leave their homes.

The police guidelines were released yesterday after Britons were told that the current lockdown, which has curtailed the civil liberties of most people in England, Scotland, Northern Ireland, and Wales, will last at least another three weeks.

According to the BBC, the stipulations of the three-page document suggest that various police officers have been “applying the rules in the wrong way.”

Since the publication of March’s Health Protection Regulations (Scotland here), UK residents have understood that they may not leave their homes except to go to work, to buy groceries, and to exercise once a day. However, the restrictions have led to zealous police officers checking shopping bags and ticketing their owners for buying “non-essential” items like wine, moving on citizens resting on park benches, and pursuing hikers with drones.

The actual regulations for England suggest that some police officers have simply been making up rules as they go along.

According to these regulations, which the National Police Chiefs’ Council has stipulated are for England only, “reasonable” excuses “to leave the place where you live” include the following:

“Reasonable” activities in pursuit of exercise include the following:

Sitting in a park to do work that could otherwise be done at home is not considered a reasonable excuse.

Other reasons to leave the house include taking a pet to the veterinarian, “providing support to vulnerable people,” and, perhaps most surprising of all, moving into a friend’s residence for several days “to allow a cooling-off following arguments at home.” Short social visits to friends and family, however, are not considered “reasonable excuses” although the stipulations acknowledge that there may be “exceptional circumstances” like a hospital allowing a particular person to visit a patient.

That residents of England are allowed to drive to the countryside and take long walks there is surprising given the Derbyshire Police campaign against people who dared to take their exercise in the Peak District.

Despite posts yesterday highlighting issues of people still visiting the #PeakDistrict despite government guidance, the message is still not getting through. @DerPolDroneUnit have been out at beauty spots across the county, and this footage was captured at #CurbarEdge last night. pic.twitter.com/soxWvMl0ls

Priti Patel, the British Home Secretary, finally took a stand on the overzealousness of police on April 9, when she stated in a radio interview that the police must not act in a “heavy-handed manner” during the national emergency. According to the Daily Mail, the Home Secretary’s remarks followed police threats to check shopping bags for “non-essential” items.

Adding to the sense that police have been making rules up as they go along was the presence of London’s police chief Cressida Dick at a crowded event on Westminster Bridge yesterday evening. There Police Commissioner Dick took part in the now weekly Thursday ritual of applauding for the National Health Service, but without enforcing the social distancing rules. These stipulate that people in Britain must stay at least six feet apart from people belonging to other households.