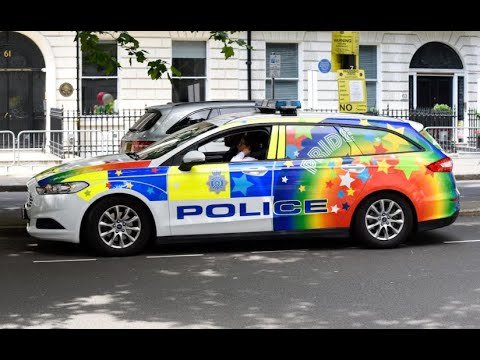 (LifeSiteNews) — UK police are facing widespread criticism after introducing a fleet of rainbow-colored patrol vehicles into the streets in an effort to confront “hate crime” and “give confidence” to LGBT people.

Julie Cooke, deputy chief constable of the Cheshire Police as well as the National Police Chief’s Council lead for LGBT issues, said the cars will be used for “normal policing patrol” in order to “show the community that we want you to come forward.”

“If something is happening that you know isn’t right we absolutely want you to come forward,” she said.

Cooke said the cars will still bear their police insignias, but decals will also feature “the rainbow side of things.”

The deputy chief claimed that the cost to replace standard patrol vehicles with rainbow versions “is quite minimal,” and argued that “the impact of seeing the rainbow is so huge.”

But the “impact” may be perceived differently by different groups.

“What the police appeared to have forgotten is that while the LGBT community may find the sight of the rainbow welcoming and inclusive, many others view it as a sign of oppression and hostility,” Catholic journalist, broadcaster, and commentator Caroline Farrow told LifeSiteNews in an email on August 25.

“The police are supposed to apply the law without fear or favour and yet their adoption of LGBT insignia is telling various religious minorities and in fact anyone who opposes gender ideology that they will be treated with contempt,” Farrow said.

While Cooke said the rainbow colors are “there to give confidence to our LGBT+ community” as well as “other underrepresented groups,” Farrow argued that “Far from inspiring confidence, the sight of the LGBT rainbow flag evokes a sense of dread and undermines important public confidence in the police, who can no longer be seen as impartial.”

Farrow predicted that while the colorful cars will likely have only “minimal impact on so-called ‘hate crime,’” they will probably “prove to be counter-productive, pouring further fuel on an already heated clash of cultures on issues of sex and sexuality.”

“One can only imagine the outcry if police cars were to be painted with religious symbols, yet the rainbow remains sacrosanct!”

According to Farrow, citizens in the UK who will now see rainbow-colored squad cars patrolling their neighborhoods have radical ideological lobbyists to thank for the change.

Farrow said homosexual rights lobby group Stonewall, whose employees often act “as diversity consultants to provide training and advice by police forces across the country,” has “ideologically captured all of the UK’s public institutions.”

But the efforts by the lobbyists may have backfired in this instance.

The rainbow cars have sparked widespread opposition, and not only from those who object to the normalization and promotion of LGBT ideology.

As reported by Pink News, a global LGBT news outlet, many people in the “LGBT community” have taken issue with the controversial paint jobs for the police cruisers, with one “trans person” remarking that “[h]ate crime is serious and I feel this sort of thing trivialises it.”

Another Twitter user commented that “[a]s a gay man I don’t want anything other than an overtly impartial, unbranded, efficient, effective, competent police force focused on protecting all who are innocent from all who are committing real crimes.”

The question of whether a police force that proclaims its alignment with a particular controversial political and moral perspective can truly be “impartial” appears to be a unifying concern.

“The problem is that the second that you see a rainbow car, you know that it is a police force that has made its mind up about some very contentious issues,” Miller said.

“You no longer see a police car or a police officer who is there to support everyone, from all political persuasions, without fear or favour.”

Miller questioned law enforcement’s focus on “hate crimes,” observing that while “the number of stabbings in London is appalling,” police do not drive “special cars” to draw attention to knife violence.

“They have literally tied their colours to the mast and painted their cars with their political leanings,” Miller argued. “They are painting rainbows on their cars when we have figures showing that only seven per cent of violent crime ends in a prosecution.”

“Hate crime” rates have risen dramatically in recent years, though the Guardian noted that the higher numbers may be primarily due to increased reporting.

— Article continues below Petition —
PETITION: Support Texas Dad risking everything to save his son from being "transitioned" into a girl
Show Petition Text
9808 have signed the petition.
Let's get to 10000!
Thank you for signing this petition!
Add your signature:
Show Petition Text

According to Citizens Advice, “[a]ny criminal offence can be a hate crime if it was carried out because of hostility or prejudice based on disability, race, religion, transgender identity or sexual orientation,” but such motives are often questionable and notoriously difficult to prove.

A 2017 Stonewall report on “hate crimes” includes the testimonies of many alleged victims of hate crimes. While some claim to have been victims of physical attacks and verbal assaults, others claim they “felt hostility,” were called by the “incorrect pronouns,” or were told they needed to repent of living a homosexual lifestyle in order to join a local church.

One 61-year-old man who identifies as a woman complained of being “mock[ed]” while at a spa by young women who recognized that he was “definitely a man.”

Knife crime in particular is a problem the UK parliament has called “persistent and worrying.”

According to data published by the House of Commons Library, “[i]n the year ending March 2020, there were around 46,000 (selected) offences involving a knife or sharp instrument in England and Wales,” the highest number since 2010-2011.

Toby Young, general secretary of the Free Speech Union, associate editor of the Spectator, and editor of Quillette, decried the rainbow car initiative in an opinion piece Tuesday, noting that while less than 10% of violent crimes are prosecuted, UK police have chosen to focus on adding divisive decals to squad cars.

“These new rainbow patrol vehicles may look like just a bit of fun, but something extremely sinister is going on beneath the bonnet,” Young said.

“The police say they hope the new rainbow cars will encourage more people to report ‘hate crimes,’ meaning they’ll get to spend even more time investigating ‘offensive’ social media posts and punishing people for thinking wrong thoughts, even though no law has been broken.”

Young’s concerns that the police are shifting from fighting crime to punishing those “thinking wrong thoughts” were echoed by Miller.

“They have moved from policing crime to policing thoughts and speech because it is easier,” he said.