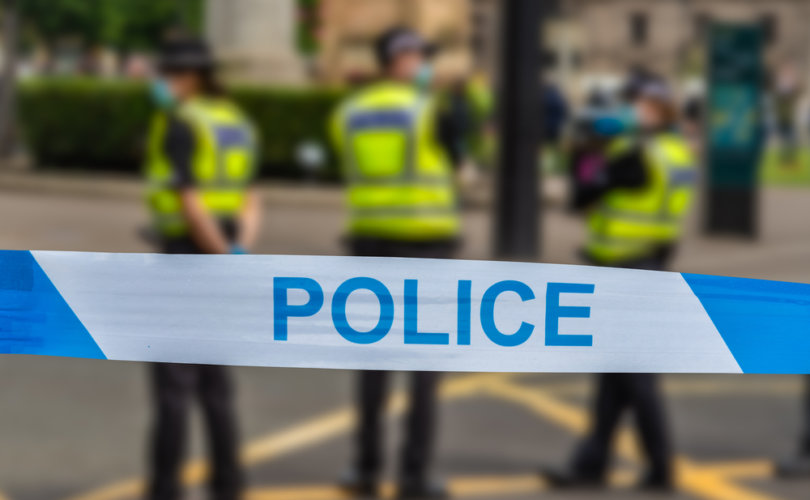 LIVERPOOL, England, February 25, 2021 (LifeSiteNews) — In measures taken supposedly in the name of public health, U.K. police removed an elderly lady praying outside her local abortion clinic, escorted her home in the police van, and claimed she was too far from home with no reason to be outside. Police said she would be fined for a breach of COVID regulations.

Rosa Lalor was taking part in the regular 40 Days for Life pro-life witness, holding a peaceful prayer vigil near a British Pregnancy Advisory Service (BPAS) center in Liverpool, when she was removed by the police and ordered to go home.

Under the current stringent restrictions in England’s national lockdown, people are only allowed outside for select reasons. Among the limited but non-exhaustive list are reasons such as offering charitable services and taking daily exercise, which can be done with no more than one other person.

As a result, no more than two people at a time have been conducting the pro-life vigil, in order to stay within the permit of the law.

Since the pro-life vigil started on February 17, however, there has been regular police presence outside the BPAS center, with police vehicles driving past or watching the pro-lifers, reportedly due to being summoned by BPAS staff.

On Wednesday, Lalor was alone outside the abortion facility, wearing a mask, and praying as she walked around. Shortly after 9 am, a police van passed her and photographed her, before she was approached by two police officers, and two police community support officers, demanding to know why she was outside her home.

Lalor defended herself, explaining that she was not simply standing still, but moving around continuously in order to complete her daily exercise. Living less than three miles away, as LifeSite has verified, she was adhering to the government’s guidance which stated that people “should not travel outside your local area.”

She pointed also to a number of men waiting outside the BPAS center to collect their wives or girlfriends who emerged from the building, asking why the police were not questioning them. Lalor stated that the officers claimed not to see anyone else, and that they further added that abortions were essential services.

Making the claim that Lalor was 8 miles from home, the officers announced that she would receive a fixed penalty notice of £200 for being in violation of COVID regulations. They mentioned that she had passed other places on the way to BPAS, where she could have performed her exercise. Since the start of the current lockdown in England, over 27,000 such fixed penalty notices have been handed out by police, in data figures running from January 6 to February 14.

In order to comply with the regulations, which are put in place in an effort to reduce the spread of infection, Lalor was then taken home along with the officers in the police van, instead of being allowed to walk home on her own.

The police also directed Lalor to warn others planning to take part in the pro-life witness, that they could be fined or arrested for what would be deemed a violation of COVID regulations.

Lalor plans to refuse the fine, and is prepared to challenge the issue in court.

While deeming abortions essential, but not prayer, the police appear to interpret the law according to particular desires, rather than in accord with the actual legislation: One need only have a “reasonable excuse” in order to leave home, but the list of reasonable excuses provided by the government is non-exhaustive.

Furthermore, the limit on travel is not laid out in law, and is merely issued as a guidance, suggesting that people should stay in their local area, village, or town.

LifeSiteNews contacted the local police force for a comment and further details as to the peculiar interpretation of the current legislation. However, the force stated it was unable to find any record of the event.

While police are enforcing a crackdown on individuals such as Lalor, the abortion facilities are continuing to operate, seemingly with the approval of the police, who revealed to Lalor that killing the unborn through abortion was an essential service.

Although the abortion mills are granted permission to operate as normal, while churches and businesses have been closed, the government introduced new measures to make abortion more widespread. Since the start of COVID restrictions, the Liverpool BPAS abortion facility and others around the country have been changing their approach to providing abortions. Thanks to permission granted by the government, “telemedicine” was adopted last spring, whereby abortifacient pills were sent out by mail, and appointments conducted via video or phone calls.

In December 2020, the Liverpool Echo reported that across the local health service area, NHS Liverpool CCG, 71% of abortions were provided as “Pills by Post” in the first three months of the new system. “Telemedicine is essential to providing high quality abortion services,” the Echo stated.

The Society for the Protection of Unborn Children (SPUC) has compiled information about the serious risks involved in taking the pills, noting that women are four times more likely to suffer complications as a result of DIY abortions, compared to surgical abortions. Given the nature of such a procedure, whereby the mother does not need to leave the house, SPUC has also warned that there is a potential for facilitating domestic abuse.

SPUC’s Director of Communications Michael Robinson said: “Home abortions facilitate a serious form of domestic violence by giving abusive men the opportunity to coerce women into abortion and to cover their tracks.”

In fact, a Pennsylvania man was arrested last May and charged with having sexually abused his daughter and stepdaughter, and performing DIY abortions in order to hide his actions.

Bishop Mark Davies of Shrewsbury in England has called the new DIY abortion regime a “sinister measure,” describing it as an assault on mothers and children.

A consultation is currently open about whether such “DIY abortion” should be permitted permanently in England, and is set to close on Friday. Those who wish to respectfully comment in defense of the unborn can see SPUC’s guide to the consultation, and the consultation itself.