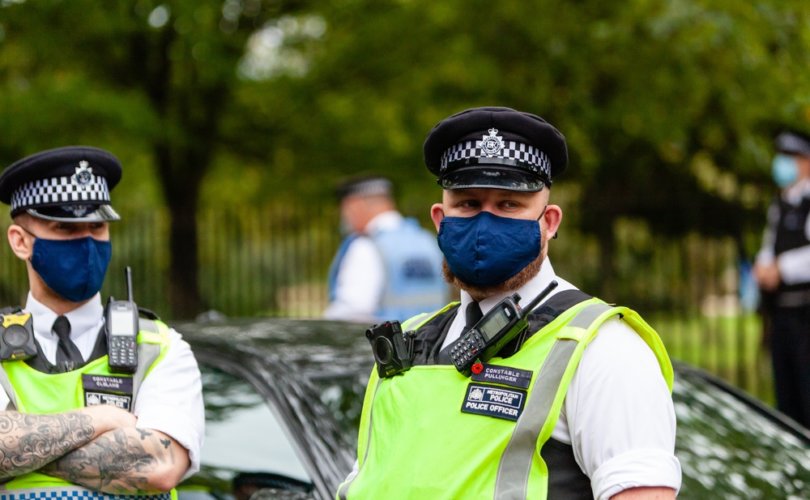 UNITED KINDGOM, January, 8, 2020 (LifeSiteNews) – As the U.K. enters its latest round of lockdown restrictions, police chiefs have warned that anyone outside their home is liable to be stopped and questioned as to the reason for their being outdoors. Anyone who does not have a satisfactory answer could face a £200 fine, with that figure doubling for every subsequent infraction, up to £6,400.

In an article penned for Britain’s Telegraph, Martin Hewitt, chair of the National Police Chief’s Council wrote that police “[f]orces will continue to bear down on that very small minority” who, he says, “flagrantly and selfishly breach the regulations, such as those that organise unlicensed music events or parties.”

Hewitt claims that, as a function of having lived through 10 months of changing lockdowns and a variety of restrictions, “everyone should now understand the rules in their area.” While the U.K. regulations do allow for a number of exceptions to the restrictions on travel and wearing face masks, the Telegraph reports that “officers will not be reasoning with offenders but will impose fines straightaway.”

The Met Police’s Deputy Assistant Commissioner, Matt Twist, echoed Hewitt’s words, saying “[a]fter ten months of this pandemic the number of people who are genuinely not aware of the restrictions and the reasons they are in place is vanishingly small.” He added that the “critical situation” presented by COVID-19 means “we [the police] can no longer spend our time explaining or encouraging people to follow rules where they are wilfully and dangerously breaching.”

On Wednesday, police put their new powers into action, arresting 21 people, some of whom were protesting the lockdown measures outside Parliament. Police were filmed handcuffing individuals and telling them that fines would be issued if they did not return to their homes.

“This behaviour puts others at significant risk, and it's right we patrol in potential hotspots and that officers are inquisitive when they see something out of the ordinary. This will offer both reassurance to the public and act as a deterrent to those who think the measures don't apply to them,” Hewitt said.

The latest U.K. lockdown regulations stipulate that “It is against the law to meet socially with family or friends unless they are part of your household or support bubble,” with one permitted occasion per day of outdoor exercise, within the nearby vicinity of one’s residence.

— Article continues below Petition —
PETITION: No to government and corporate penalties for refusing COVID-19 vaccine
Show Petition Text
103123 have signed the petition.
Let's get to 125000!
Thank you for signing this petition!
Add your signature:
Show Petition Text

A London Metropolitan Police statement published on Wednesday instructs that with “fewer 'reasonable excuses' for people to be away from their home in the regulations, Londoners can expect officers to be more inquisitive as to why they see them out and about.” The statement goes on to warn that “[w]here officers identify people without a lawful reason to be away from home, they can expect officers to move more quickly to enforcement.”

Regarding face masks, those not wearing them “where they should be and without good reason can expect to be fined – not reasoned with.” Johnson drove home the point about masking up, declaring that “your harmless cough can be someone else's death knell.”

“These measures will only work if people comply,” he continued, adding that “these rules will be enforced by tighter penalties.”

The Met Police statement also revealed that officers will still be following the “four E’s” approach of “engaging, explaining, and encouraging – only then enforcing,” which is supposed to limit officers from abusing their new powers by issuing fines too quickly. However, revised instructions have been handed down, ordering law enforcement to “issue fines more quickly to anyone committing obvious, wilful and serious breaches.”

As part of the effort to curb disobedience to the new rules, the police “launched a new digital fines system which makes it quicker and easier for officers to issue fines on the spot.” According to the Met Police, this new system is responsible for reporting more people and issuing more fines since its launch less than a month ago “than in the rest of the year combined.”

Whilst Twist did express a desire that “this particular trend” not continue, he nevertheless dug his heels, saying that “if people continue to break the rules, putting themselves, their families and their communities at greater risk, our officers are ready to act robustly.”