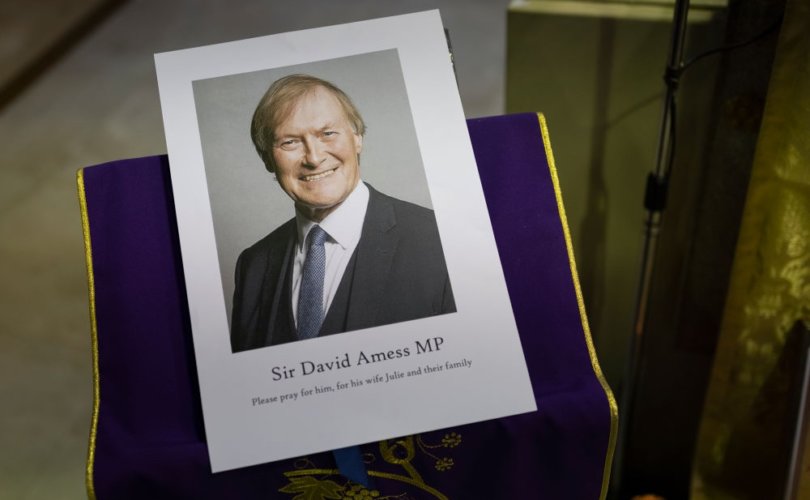 LONDON (LifeSiteNews) — Priests in Britain will now be permitted to access crime scenes to administer the last rites to dying Catholics.

New guidelines, published last month by the British College of Policing, were issued in the wake of a controversial decision by the Essex police to deny a Catholic priest access to the dying Sir David Amess, a Member of Parliament, because the building in which he was attacked was a crime scene.

The changes to the guidelines follow the conclusion of a working group led by Archbishop John Wilson of Southwark and a deputy assistant commissioner of the Metropolitan Police.

The new guidance clearly states that priests may be permitted to access crime scenes to administer the last Rites to a dying victim.

“Immediately after an incident involving death or serious injury, a third party (not a member of the emergency services) may make a request to access the scene to attend the victim. This may include, for example, a priest, of the victim’s faith or religion asking to administer Last Rites or other religious needs, or a family member wanting to comfort a loved one,” the guideline states.

“For the first time, we have official guidance from the police that recognizes the importance of priests and the sacrament of the Last Rites,” Parker said last Friday.

“We are extremely grateful to everyone involved in the working group for producing such a clear and sensible set of guidance notes.”

The previous day, on March 31, Archbishop John Wilson of Southwark, who represented the Catholic Church in the joint group, also welcomed the change, stating, “at a critical time, such spiritual and/or family support can make all the difference for those for whom it is important.”

“For Catholics, this means access by a priest who will be able to offer absolution, anointing and prayers of accompaniment — often referred to as the Last Rites. We are very grateful for this,” he added.

The working group at the origin of the revision was put together by Metropolitan Police Commissioner Cressida Dick and Cardinal Vincent Nichols of Westminster, president of the Bishop’s Conference of England and Wales, following the murder of Sir David Amess.

The Catholic MP was stabbed to death while holding a meeting with his constituents in Belfairs Methodist Church in Leigh-on-Sea, Essex, on October 15, 2021.

In the immediate aftermath of his violent death, Catholics in Britain and around the world were shocked to learn that Fr. Jeffrey Woolnough, a priest who had heard of the attack and gone to administer the last rites to the dying man, had been denied access to the crime scene.

The decision by the Essex police was severely criticized by Catholic clergymen and government officials alike.

Bishop Mark Davies of Shrewsbury, for instance, argued that the last rites should be recognized as “an emergency service,” and Catholic MP Mike Kane even called for an “Amess Amendment” to be passed that would guarantee priests to access those requiring last rites.

The new guidelines seem to have granted their wishes, for the new guidance acknowledges that while requests by priests to access crime scenes “are likely to be rare, they can be extremely important for the victim and their family.”

The London trial of Sir David’s alleged assassin, 26-year-old Ali Harbi Ali, has been adjourned for at least four days, as the judge in charge of the case has tested positive for COVID-19.