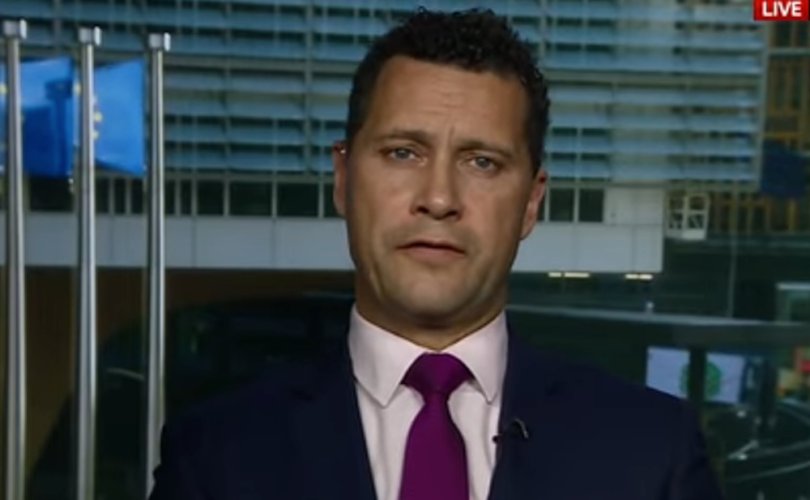 LONDON, April 27, 2018 (LifeSiteNews) — The English politician most prominently supporting Alfie Evans and his parents spoke on British television today to explain how an “Alfie’s Law” could help parents.

Member of European Parliament Steven Woolfe appeared on ITV’s Good Morning Britain and spoke to hosts Kate Garraway and Ben Shephard. He pointed out that Alfie Evans’ working-class hero father Thomas was enormously vulnerable in his struggle with Alder Hey Hospital to find alternative care for his son.

“We had a 21-year-old man, not university educated, no law degree, having to go to the High Court hearing here in London and battle to save [Alfie’s] life against some of the most expensive, well-paid QCs in the country, paid for by the state through the NHS with a whole panel and the justice system in there,” Woolfe said.

He said that parents like Tom Evans should have an independent expert to even the playing field.

“By having what we believe an independent advocate, acting for them, not selected by the state but out of a panel of people, they could have somebody on their side from the very beginning,” he said.

The Manchester native questioned the wisdom of allowing British doctors to veto care in respectable hospitals in other parts of the world.

“It’s the UK medical profession that is saying, 'Our position this time is that we’re not going to let him go,'” Woolfe stated, but the rest of the world is wondering why Alfie isn’t just allowed to go to the Italian hospitals that have offered to help.

“Why are they not being allowed the opportunity?” he asked. “To say that the British medical centre is so good in the world that nobody else is any good?”

Woolfe cited the case of Ashya King, whose parents were jailed after they took him from Britain to seek treatment at a Czech hospital. The boy has now been cancer-free for three years.

Today Connie Yates, mother of  the late Charlie Gard, also spoke in favor of a new law, asking that the work she and her husband Chris Gard had already done for one be taken into account.

In a previous interview with Sky News, Woolfe blasted “institutional arrogance – a belief that they [UK medical institutions] can never do anything wrong.”