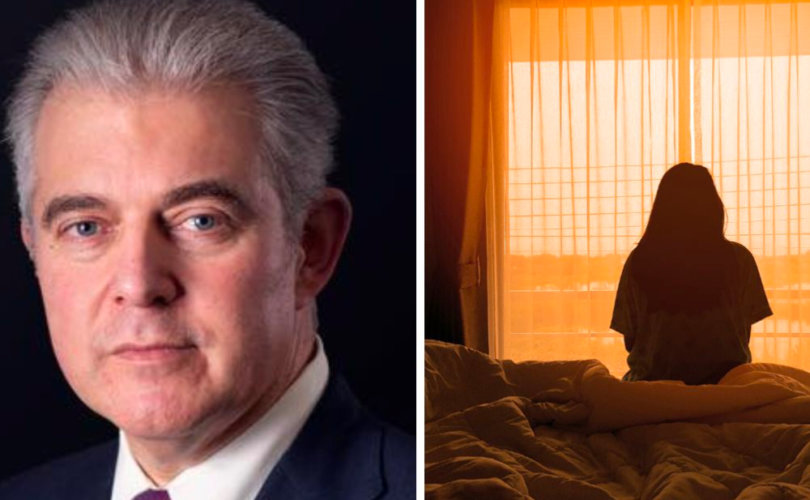 (Right To Life UK) – The Northern Ireland Secretary, Brandon Lewis, has indicated that he now wants to impose ‘DIY’ abortion services on Northern Ireland, as he is set to take over the commissioning of abortion in the region.

The original abortion framework that was imposed on Northern Ireland went far beyond current abortion legislation in Great Britain, but did not impose “DIY” home abortion services on the region.

However, the Secretary of State for Northern Ireland, Brandon Lewis MP, is set to commission abortion throughout the region and has now announced that he wants to introduce ‘DIY’ home abortions to Northern Ireland.

Appearing before a Westminster committee last week to debate a recent law change that has permitted him to directly commission abortion in Northern Ireland, Lewis said:

I’m aware that the current regulations do not directly allow for telemedicine, but I am going to assess this issue and I am minded to take action to support women in Northern Ireland having the same access as women across the United Kingdom.

“I do not expect the Minister for Health and the Department of Health to take this forward,” he told the committee.

A number of MPs spoke against the move to give the Northern Ireland Secretary this new power during the committee debate last week.

DUP MP Carla Lockhart said: “It is clear that these regulations fly in the face of democratic accountability.”

Constitutionally they set a dangerous precedent, financially they are unaccountable and politically they remove democratic accountability from the person who made the decision and ignore the views of the people of Northern Ireland.

Lockhart also objected to the Secretary of State indicating he wanted to introduce ‘DIY’ abortion saying:

It is deeply worrying that the Secretary of State wants to go even further with his indication he will introduce telemedicine abortions.

‘DIY’ abortion in England and Wales

‘DIY’ abortions were initially introduced as a temporary measure as part of the Governments pandemic response. However, England, Wales and Scotland all decided to make it a permanent feature of the law.

Between April 2020 and September 2021, more than 10,000 women had to receive hospital treatment following the use of medical abortion pills in England. Parliament has recently voted to make this scheme permanent, despite the Government’s insistence that it “was always intended to be a temporary measure” as part of other emergency legislation.

Last year, over 600 medical professionals signed an open letter to the Scottish, Welsh and English Governments calling for an end to ‘at-home’ abortion due to concerns that it has led to a number of abortions occurring over the ten-week limit and that it fails to protect women and girls from being coerced into an abortion against their will.

Medical doctors have also pointed to the potential for coercion and abuse. During the ‘DIY’ abortion debate in England, Dr. Calum Miller, NHS doctor and research associate at the University of Oxford specialising in abortion policy, urged the Government to “prioritise women’s safety above the interests of abortion providers by shutting the lid on it once and for all.”

Dr. Miller argued that since the introduction of ‘DIY’ abortions “the evidence has only piled up more and more against it.”

He said that face-to-face consultations are a “critical safeguard against coerced abortion, life-threatening ruptured ectopic pregnancies and a litany of other possible risks.”

Dr. Miller noted that “abusers might be listening in on [telemedicine phone consultation] conversations” (New England Journal of Medicine); “Consultations, when possible, are offered online, which may introduce further barriers to accessing support” (UN Office of Drugs and Crime); and some women’s “living arrangements may not permit the privacy and confidentiality appropriate for patient care” (Journal of the American Medical Association).

The health service in Ireland has admitted that removing abortion from a clinical setting has made instances of coercion and abuse harder to identify.

Right To Life UK spokesperson Catherine Robinson said in response: “‘DIY’ abortion has been a disaster everywhere it has been introduced. It facilitates coercion and abuse, and it is dangerous for women to be taking powerful drugs without any in-person medical examination.”

“Advocates of ‘DIY’ abortion though have shown that they are willing to put women’s safety on the line in pursuit of more abortions,” she said.

Reprinted with permission from Right To Life UK