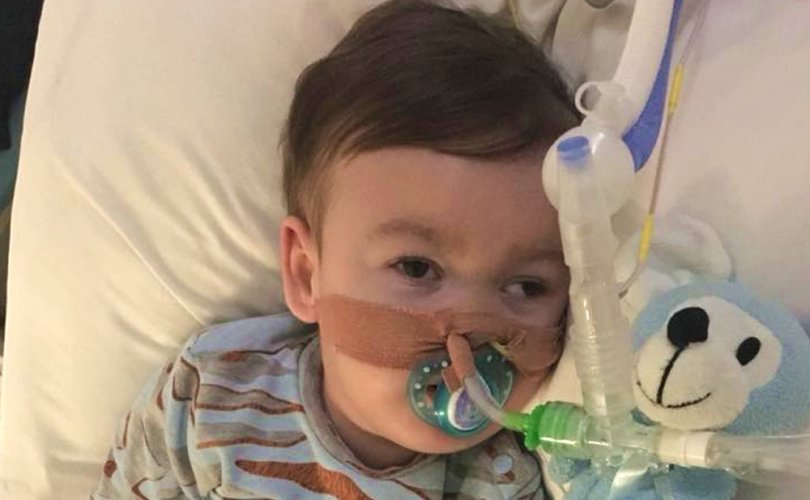 MANCHESTER, England, April 13, 2018 (LifeSiteNews) – A UK politician will raise the case of Alfie Evans in the EU parliament in Strasbourg on Monday.

Wajid Khan, an MEP for Manchester, wrote to Alfie's parents today to offer his support and ask permission to show the child's photograph during his speech.

“My heart goes out to you and your family,” he wrote. “I am devastated to read and watch the circumstances at the hospital.”

The MEP's support comes as Alfie's parents Thomas and Kate battle to remove their son from a children's hospital in Liverpool that has been empowered by the courts to remove the boy's life support. Parents say their 23-month-old son remains undiagnosed and is not as sickly as the hospital makes him out to be. The parents have arranged a medical team to transfer their son to care in Italy, but the hospital has refused to let the boy go. Police were brought in yesterday to ensure that parents did not remove their son from the hospital.

Khan noted that he had previously promised to make a speech about Alfie at EU Parliament, and that now his speech has been accepted. It will take place on Monday, April 16, 2018 and streamed live over the EU parliamentary website some time between 9 and 10 AM.

“I want to dedicate this speech to Alfie for the courage and strength he has shown as well as raising awareness [of] his case internationally,” Khan continued.

The MEP said that as a father of a boy about Alfie's age, he wouldn't want to imagine being in a similar situation, one he said was “deeply upsetting to witness.”

I hope you accept my request of dedicating this speech of Alfie and having his picture displayed in the European parliament,” he wrote.

Earlier this week the MEP sent a letter to Alder Hey Hospital where Alfie is being held to express his “deep concerns” about the situation.

“As a parent I would not want my rights to be taken away from me and to be told my child should pass away especially when you are being offered alternative treatment in another country. I would personally explore every option available to find any routes that would be a possibility in keeping my son alive,” he wrote in the April 10 letter.

“I can only plead with your selves at Alder Hay [sic] to give Alfie a chance in life to be able to have that chance of living.”

“Please I sincerely plead with you to revisit this decision and allow Alfie the opportunity to be treated with hope that his illness is diagnosed and treated and is given the right to live,” he wrote.