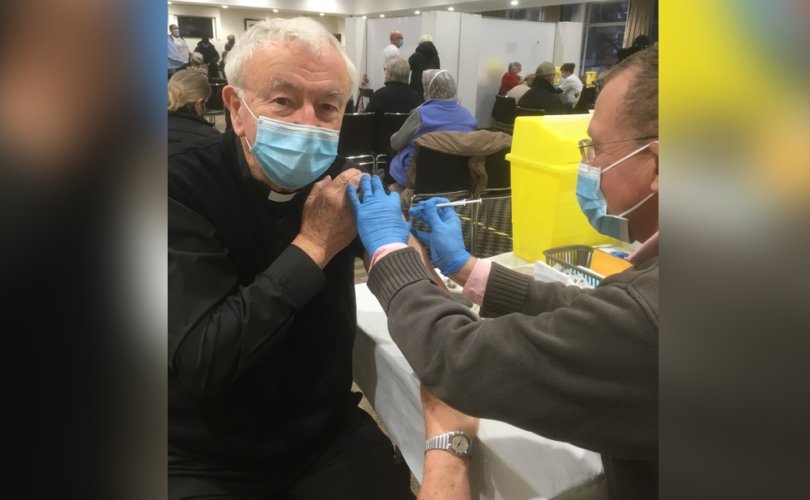 WESTMINSTER, United Kingdom, January 27, 2021 (LifeSiteNews) – A U.K. priest and the Catholic Bishops Conference of England and Wales have revealed that the U.K. government has lobbied religious leaders to promote the abortion-tainted COVID vaccines to their congregations.

In a newsletter sent out to his congregation, Father Neil McNicholas of St Mary & St Romuald Parish in Yarm wrote that “We have been asked to encourage parishioners to accept the opportunity to be vaccinated, and at the same time to strongly counter misinformation on social media regarding the vaccine.”

Further information contained on Fr. McNicholas’s website was more detailed, as he explained that clergy had “been asked by the ‘Coronavirus Places of Worship Task Force’ – Cardinal Nichols is one of the Church’s representatives on that group – to try to encourage parishioners to accept the opportunity to be vaccinated when that offer comes along.”

The Places of Worship Task Force (PWTF) was established by the U.K. government in May 2020, in order to ensure that churches and other religious buildings could safely open for worship, whilst satisfying the government’s COVID-19 restrictions. It falls under the oversight of the Ministry of Housing, Communities and Local Government, led by Rt. Hon Robert Jenrick MP, and is composed of the leaders of the U.K.’s most prominent religions.

Among the members are Vincent Cardinal Nichols, Catholic Archbishop of Westminster, along with Justin Welby, the Protestant Archbishop of Canterbury, and the Chief Rabbi, Ephraim Mirvis.

Despite originally being focused on assisting churches and places of worship to open in a manner which would reduce risk of COVID transmission, the PWTF is now seemingly being used by the government as a means of promoting the various approved COVID vaccines. All of the vaccines in use so far have connections to abortion, and have been described by a number of Catholic prelates as “never morally justified,” for Catholics to use.

LifeSiteNews repeatedly contacted the Ministry of Housing, Communities and Local Government, to confirm with them that the government was lobbying the PWTF.  Whilst the ministry did not send a statement as staff had promised, a press officer did confirm in response to LifeSite’s question, that “I imagine the answer’s yes.”

After a number of failed attempts at contacting four of the archbishops in England, along with a number of other diocesan bishops and priests, LifeSiteNews was eventually able to get confirmation from the Catholic Bishops Conference of England and Wales (CBCEW), that the government was indeed lobbying religious leaders to promote the vaccine.

In an email statement, the CBCEW wrote: “The UK government is encouraging all faiths to promote the take-up of the vaccine among their congregations. In the Catholic Church, Pope Francis encouraged all Catholics to be vaccinated and in England & Wales bishops have likewise promoted the uptake of vaccinations.”

— Article continues below Petition —
PETITION: No to mandatory vaccination for the coronavirus
Show Petition Text
1080023 have signed the petition.
Let's get to 1100000!
Thank you for signing this petition!
Add your signature:
Show Petition Text

Both the CBCEW and Fr. McNicholas highlighted the importance of the example which Pope Francis gave by receiving the vaccine recently, with McNicholas writing that “Pope Francis has given his own personal endorsement to the vaccine and will himself be vaccinated next week.”

Cardinal Nichols himself recently posted a picture online showing his own reception of the vaccine, and asking that people receive the vaccine: “First dose of the Covid-19 vaccine yesterday! Such a kind and cheerful experience. I strongly encourage everyone to take the vaccine. Let’s play our part and support NHS staff as they fight to save so many lives.”

The CBCEW noted that Nichols’s picture was specifically released with that intent: “Last week a picture of Cardinal Vincent Nichols being vaccinated was disseminated with encouragement for all to be vaccinated.” The underlying message seems to be to encourage Catholics to receive the abortion-tainted vaccines.

Commenting on Pope Francis’s reception of the vaccine, Archbishop Carlo Maria Viganò wrote: “It is disconcerting that, after unscrupulously demolishing no small number of Catholic truths in the name of dialogue with heretics and idolaters, the one dogma which Bergoglio is not ready to renounce is that of obligatory vaccination — mind you, a dogma which he himself unilaterally defined without any synodal process!”

Cooperating in promoting the unethical vaccines is not the first time that the U.K. bishops have collaborated with the government. In March 2020, the CBCEW themselves volunteered to close their churches, despite the government originally leaving them open for private prayer. Some weeks later, Cardinal Nichols told Catholics who were petitioning him to re-open their churches, that it would be a “scandal” for churches to open for private prayer at the present time.

When the government ordered the cessation of public worship in the November lockdown, Nichols told Catholics to obey the restrictions, citing Scripture and saying that “[d]espite profound misgivings, it is important that we, as responsible citizens, observe these Regulations, which have the force of law.”

In early December, the CBCEW released a letter which went further than any of their previous communications on the issue of vaccines, in which they stated that even with abortion-tainted vaccines, “one does not sin by receiving the vaccine.”

Mentioning the Pfizer, Moderna, and Astra Zeneca vaccines by name, the CBCEW stated that “one may in good conscience and for a grave reason receive a vaccine sourced in this way,” that is, connected to abortion, providing “there is a sufficient moral distance between the present administration of the vaccine and the original wrongful action. In the COVID-19 pandemic, we judge that this grave reason exists and that one does not sin by receiving the vaccine.”

However, a number of prominent Catholic clergy have taught otherwise. In a paper released on December 12, Bishop Athanasius Schneider, along with co-signers Cardinal Janis Pujats, Bishop Joseph Strickland, and Archbishops Tomash Peta and Jan Pawel Lenga, expressed the strong conviction that any use of a vaccine tainted with the “unspeakable crime” of abortion “cannot be acceptable for Catholics” under any circumstances.

What need for an unsafe vaccine?

The former vice president of Pfizer, Dr. Michael Yeadon, has flatly rejected the need for coronavirus vaccines, saying: “there is absolutely no need for vaccines to extinguish the pandemic. I’ve never heard such nonsense talked about vaccines. You do not vaccinate people who aren’t at risk from a disease. You also don’t set about planning to vaccinate millions of fit and healthy people with a vaccine that hasn’t been extensively tested on human subjects.”

Dr. Theresa Deisher, who holds a doctorate in Molecular and Cellular Physiology from Stanford University, rejected the need for a vaccine for COVID-19, explaining that it “has less than a 0.03% fatality rate and most of those people, I believe 92% or above, have other health problems.”

It seems that Yeadon’s warning about the lack of testing is already bearing fruit, as numerous reports from around the globe are documenting unexpected deaths, shortly after people receive COVID-19 vaccines. Not only that, but a warning issued about Pfizer’s vaccine stipulated that pregnancy should be avoided for two months after the injection, and breastfeeding and pregnant women should not take it. The paper also revealed that there was no knowledge about what impact the injection could have upon fertility.

Indeed, those who have received their vaccinations may have done so for no reason, as medical advisers across the world are suggesting that people must continue to wear masks and practice physical distancing, even after the injection.

In place of such untested and dangerous vaccines, the two little known treatments of ivermectin and hydroxychloroquine (HCQ) have received much support from medics, with doctors saying that ivermectin “basically obliterates transmission of this virus,” with “miraculous effectiveness.”

Meanwhile hydroxychloroquine can reduce mortality of COVID patients “by 50 percent.” The Association of American Physicians & Surgeons explained that COVID mortality rate “in countries that allow access to HCQ is only one-tenth the mortality rate in countries where there is interference with this medication, such as the United States.”