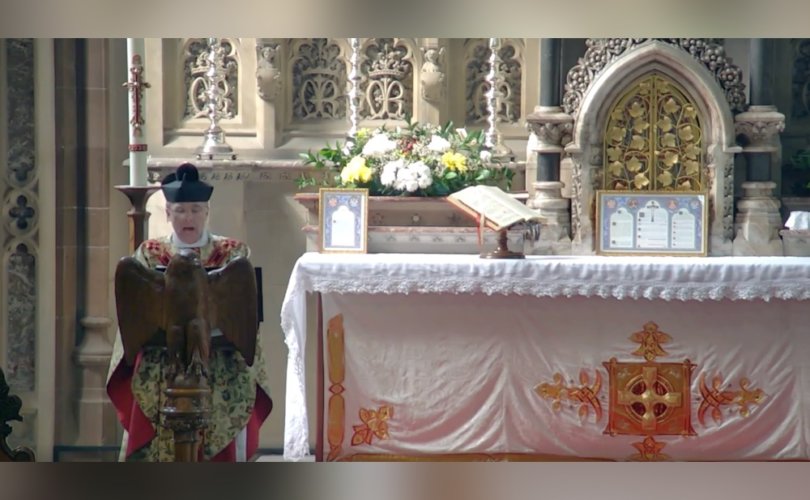 WARRINGTON, England, April 28, 2020 (LifeSiteNews) ― A Catholic priest has gently corrected the British Prime Minister by asserting that “the beating heart of this country” is not its National Health Service but Jesus, Savior of Man.

“Much as I agree with Prime Minister Boris Johnson in his praise of many NHS doctors and nurses, I cannot agree with his unconditional statement on Easter Sunday last, just two weeks ago: ‘We will win because our NHS is the beating heart of this country. It is the best of this country. It is incomparable. It is powered by love,’” De Malleray read.

“With due respect to the Prime Minister, as a Catholic priest, as a shepherd of souls, I must state that the beating heart of this country is in our tabernacles,” the priest continued.

“That beating heart is called Jesus Savior of Men, Iesus Hominum Salvator, or by his initials IHS.”

De Malleray’s homily addressed the almost total suppression of sacramental ministry to Catholics in Britain because of the pandemic, something he believes is “the worst calamity in the world.”

In the locked-down United Kingdom, it has become a weekly ritual to applaud and cheer for NHS staff and other “essential workers” on Thursdays at 8:00 p.m. Public worship of God, however, has been banned. Catholics and other Christians have been forbidden to enter churches even for private prayer, whereas supermarkets and abortion businesses have remained open.

The irony was not lost on De Malleray.

“How is it possible that Mary Stopes, the main abortion provider in the UK, can boast of the following on its website?” the priest demanded, and read its statement, “COVID-19 measures to not impact our abortion care [sic] clinics as we are providing an essential medical service. You ARE allowed to leave your home to visit our clinics.”

The NHS itself directs abortion-minded women to Mary Stopes through its website. To illustrate the tax-funded medical system’s complicity in abortion, De Malleray also read aloud the NHS’ online claims that “impartial information and support” are available at a number of abortion businesses, including Marie Stopes, and its warnings against “so-called crisis pregnancy centers that claim to provide impartial advice but often do not.”

“My friends, who can ignore that what the NHS calls impartial advice is a heavy and systematic pressure to kill innocent children at cost?” the priest demanded.

“Who can ignore that what the NHS calls ‘partial’ is a compassionate and respectful help to save unborn children?”

De Malleray compared the 20,000 death attributed to the coronavirus by Sunday with the number of abortions committed in the United Kingdom every year: 209,000. The nation’s doctors and nurses are directly responsible for these deaths, he observed.

“Unlike the attributed coronavirus deaths, deaths by abortion are not caused by underlying conditions,” the priest stated.

“Deaths by abortion don’t occur against the efforts of the doctors and nurses, but through their willful and personal intervention. Deaths by abortion are not accidents occurring by the negligence of NHS staff,” he continued.

“On the contrary, they are considered central to the mission and the ethos of the NHS and of the state.”

De Malleray contrasted the Prime Minister’s Easter Sunday adulation for the NHS with his failure to thank either God or those who prayed for him when he was hospitalized with COVID-19, saying that it showed British society’s spiritual decline.

“That on Easter Sunday morning, when the world celebrated the Resurrection of the Lord, a Prime Minister once baptized Catholic should not have a single word of thanks to the Master of Life for saving his and for the many Christians who offered prayers and sacrifices for his recovery, showed how dramatically we have lost contact with supernatural realities.”

De Malleray stated that good shepherds among the clergy were, “after the example of our Lord, with prayer and sacrifice,” doing everything in their power to return access to the churches to the faithful. He envisioned the Lord asking every priest at his judgement what he did to bring the sacraments to His flock and whether, alongside his adulation of the NHS, the pastor proclaimed the “IHS, Jesus Savior of Man.”

The priest stated also that good shepherds will remind their flocks that their bodies were made for their souls, that the only virus that can kill souls is sin, and that the only remedy for sin is “IHS, Jesus Savior of Man.”

The homily, which can be found this week on The Priestly Fraternity of Saint Peter’s (FSSP’s) livemass.net, was also posted permanently to Facebook by Catholic youth group Juventutem London.

Fr. de Malleray told LifeSiteNews via email that the homily was posted to Facebook without his knowledge, but that he has since given permission for its publication.

The FSSP priest expressed his thanks to the Bishops of England and Wales for their advice to priests during the pandemic, which includes encouragement to “offer holy Mass daily, even in the absence of anyone attending: because Holy Mass is primarily an action of Christ, and because liturgical acts are public by their nature, our lonely Masses still benefit our flock, our diocese, the Church universal – and us celebrants.”

The Priestly Fraternity of Saint Peter (FSSP) was founded by St. John Paul II in 1988. The FSSP offers Mass only according to the Extraordinary Form, i.e. the Traditional Latin, or Tridentine, Mass. If you wish to support the FSSP in the U.K., please click here.