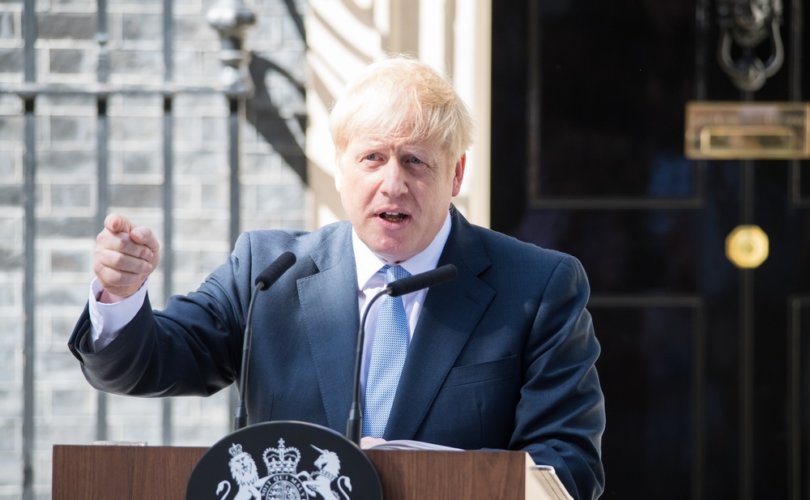 LONDON, United Kingdom, July 22, 2020 (LifeSiteNews) — U.K. Prime Minister Boris Johnson has said that the government will move to ban “gay conversion therapy,” while failing to define how this might impact those seeking help with unwanted same-sex attraction.

In an interview with Sky News earlier this week, Johnson said: “on the gay conversion therapy thing, I think that's absolutely abhorrent and has no place in a civilized society, has no place in in this country – what we're going to do is a study right now on, you know, where is this actually happening? How prevalent is it? And we will then bring forward plans to ban it.”

Last month, a United Nations “Report on Conversion Therapy” encouraged governments to outlaw doctors from offering and patients from seeking assistance in overcoming unwanted feelings of homosexual attraction or confusion about their gender identity.

U.K. lobby group Christian Concern has pointed out in response to Johnson’s comments this week that “nowhere has the government or the UN offered any real definition of ‘conversion therapy’, and any ban would likely involve sacrificing the freedom of Christian counsellors and ministries to offer talking therapies, counselling and even prayer to those who want to turn away from LGBT attractions and practices.”

Some social conservatives celebrated the resounding general election victory in November last year for Johnson and the Conservative Party, with the other major parties having made the decriminalization of abortion and the promotion of LGBT causes prominent aspects of their election manifestos. However, it was a Conservative-led government which in 2013 introduced same-sex “marriage” without it having appeared in their manifesto, with Johnson a vocal supporter of the legislation.

In 2012 Johnson, then an MP and mayor of London, famously said of same-sex “marriage” on Sky News in December 2012, “Let’s whack it through [Parliament].” While Johnson was mayor of London he led the city’s homosexual “pride” march, wearing a pink diamante cowboy hat.

Following last year’s general election U.K. media reported that the United Kingdom now has the “gayest parliament in the world,” with eight percent of all MPs and almost seven percent of the Conservatives’ 365 elected MPs identifying as homosexual or bisexual. The U.K.’s Office for National Statistics released a study last year which suggested that homosexuals or bisexuals made up just two percent of the U.K.’s population in 2017.

Johnson’s comments are in line with moves around the world to ban so-called “conversion therapy.” Canadian Prime Minister Justin Trudeau is currently pushing legislation that would prohibit parents from seeking to help their son or daughter overcome gender confusion or unwanted homosexual attraction. In Germany, a bill was launched earlier this year that would ban all therapies “aimed at changing or suppressing sexual orientation or self-perceived gender identity,” and the recently formed Irish coalition government has made it a part of their Programme for Government to “ban conversion therapy.”

In New York, an Orthodox Jewish psychotherapist who for more than 50 years has regularly seen patients asking for help in overcoming same-sex attraction, has successfully fought back against a law that would have banned his conversation-based therapy. The city of New York was first forced to repeal the law and subsequently agreed to pay $100,000 in lawyers’ fees and damages after Dr. Dovid Schwartz of the Chabad Lubavitch Orthodox Jewish Community launched his legal challenge last year, arguing that the law violated the First Amendment’s guaranteed right to free speech.

Defenders of bans on “reparative” or “conversion” therapy, such as Zack Ford of the American left-wing ThinkProgress, claim that “every major medical organization has condemned the practice as ineffective and harmful.” But many former homosexuals, such as Angel Colon and Drew Berryessa, attest to the treatments’ success in improving their lives. They say they want others currently struggling with unwanted same-sex attraction to have the same options that benefited them.