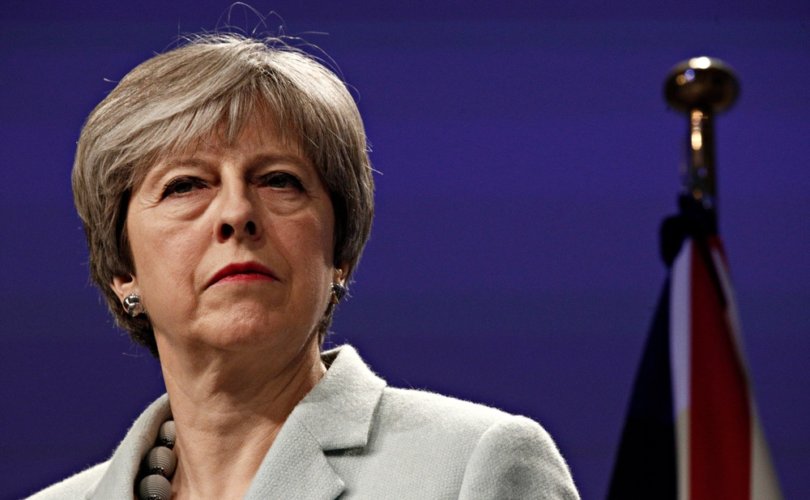 MANCHESTER, May 1, 2018 (LifeSiteNews) — British Prime Minister Theresa May has finally weighed in on the Alfie Evans case, offering condolences to the family but ultimately siding with Alder Hey Children’s Hospital.

During a visit to Brooklands Primary School in Sale, Greater Manchester on Monday, May received a question as to whether she would support Alfie’s Law, legislation proposed by British Member of European Parliament Steven Woolfe to restore parental rights over medical decisions in similar cases.

Alfie died Saturday at Alder Hey, which had removed his ventilator five days earlier in defiance of his parents’ wishes. Alfie’s doctors said he had an undiagnosed and untreatable neurological condition that caused serious and irreparable brain damage.

For months, parents Tom Evans and Kate James fought the hospital in court to keep him alive and transfer him to a willing hospital in Italy, but were denied at every turn. The 23-month-old boy’s second birthday would have been May 9.

“The MEP Steven Wolff is campaigning for Alfie’s Law, which would give parents the final say over their child’s life. Is that something you would potentially support or get behind?” a reporter from Global Radio asked. The prime minister didn’t answer, but spoke more generally about the case.

“It’s a tragic case, all of us feel enormously for the parents of Alfie,” May said. “This is a great tragedy to have to go through, the death of a child and particularly to see this happen in this way.”

At the same time, however, she maintained it was “important that decisions about medical support that are given to children and to others are made by clinicians who are expert in that matter.”

Last summer, May refused to intervene in the similar case of Charlie Gard, another sick UK infant who died at the age of eleven months after authorities denied his parents the opportunity to seek treatment outside the country.

“[N]o doctor ever wants to be placed in the terrible position where they have to make such heartbreaking decisions,” May claimed at the time. “I'm confident that Great Ormond Street Hospital have and always will consider any offers or new information that has come forward with consideration of the well-being of a desperately ill child.”

Last week, Tom Evans told the Daily Star that May “could be doing so much more to save my Alfie,” but lamented that she was “not interested in one of the biggest priorities that could potentially cause uproar for this country in the future.”

“That’s the way we treat children with disabilities in this country,” Evans said. “We’ve tried everything to reach out to the government. Through MEPs, everything.”

Woolfe, who has repeatedly advocated for Alfie throughout the ordeal, penned an op-ed on Saturday in The Independent making the case for Alfie’s Law.

He explained that it would give parents an impartial advocate to represent their interests from the beginning of any decision-making process, provide financial aid if legal appeals become necessary, and guarantees parents the right to a second opinion from a medical professional of their choice, who is independent from the British National Health Service and whose assessment must carry equal weight in court.

“We cannot go on treating parents as bystanders, little more than unrelated and largely unwanted visitors when it comes to the decisions made by doctors and the courts,” Woolfe wrote. “The government has the power to act, and it must do so.”