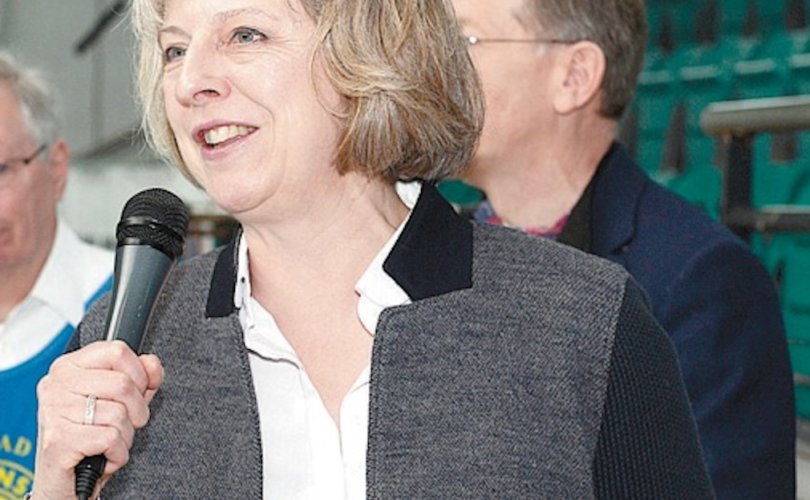 UNITED KINGDOM, July 5, 2017 (LifeSiteNews) – British Prime Minister Theresa May said she's confident the hospital that has been fighting in court to remove 11-month-old Charlie Gard from life support against his parents' wishes is taking into consideration his “well-being.”

Chris Gard and Connie Yates, Charlie's parents, have been fighting in European courts for their right to bring him to the U.S. for experimental treatment for his rare muscle and brain disease. They raised over $1 million to do this, but English courts sided with the hospital, Great Ormond Street Hospital, which wants to remove him from life support.

Then, the European Court of Human Rights also sided with the hospital. Charlie was scheduled to die on Friday, June 30, but his parents have been granted more time with him. Media around the world have been covering the case. Pope Francis and President Trump have both expressed their solidarity with Charlie's parents. Trump said he'd be “delighted” to help save Charlie. A Vatican hospital offered to treat Charlie, but then said Great Ormond Street Hospital refused this offer.

Charlie's parents' MP, Seema Malhotra of the Labour Party, asked May whether she'd intervene to help her constituents save their baby's life.

“If there is any room for discretion within the court rulings for Great Ormond Street [Hospital] to allow Charlie to leave and to transfer his care to doctors at Columbia University, and he is sufficiently stable to receive treatment, would the Prime Minister do all she can to bring the appropriate people together to try and make this happen?” asked Malhorta, noting that if Charlie remains in the UK his life support will be “switched off.”

Malhorta said this is an “incredibly difficult” time for Gard and Yates.

“I understand the chances” of Charlie's condition improving are “low,” but the doctors at another hospital “would be able to say within three months whether Charlie is responding” to new treatment, Malhorta said.

“I'm sure the thoughts of all members of the House are with the family at – and Charlie – at this exceptionally difficult time,” May responded. It's an “unimaginable position for anybody to be in and I fully understand and appreciate that any parent in these circumstances would want to do everything possible to, uh – and explore every option for their seriously ill child.”

“But I also know that no doctor ever wants to be placed in the terrible position where they have to make such heartbreaking decisions,” she continued. “The honorable lady referred to the fact that we have that court process here. I'm confident that Great Ormond Street Hospital have and always will consider any offers or new information that has come forward with consideration of the well-being of a desperately ill child.”

The exchange is below in a video from The Mirror.