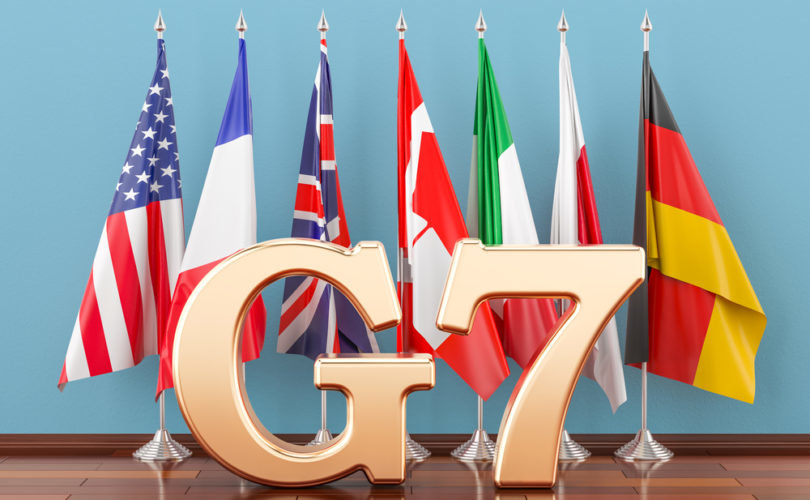 LONDON, June 9, 2021 (LifeSiteNews) — British Prime Minister Boris Johnson has signaled that the G7 summit, to be held in Cornwall on the southwestern coast of England from June 11 to June 13, will be a chance for the U.K. to “lead the way” in a worldwide effort to implement an internationally recognized COVID vaccine passport scheme.

The summit, supposedly focused on uniting “leading democracies to help the world fight, and then build back better from coronavirus and create a greener, more prosperous future,” will also be used to “agree a common approach to verifying and sharing COVID Health Certificates across borders,” the Mail on Sunday reported.

The alleged benefit of an internationally recognized system of vaccine verification is to aid the beleaguered airline industry, hard-hit by lockdown restrictions and travel bans in countless countries across the globe. A summit document seen by the Mail on Sunday alleged that without such a system in place, the industry will become “paralysed” by bureaucracy, adding that an international system to “'verify that people have accurate tests or genuine vaccines” will overcome this apparently severe obstacle.

Johnson issued a call ahead of the summit, asking all G7 attendees “to make concrete commitments to vaccinate the entire world against coronavirus by the end of 2022,” according to a June 6 press release.

“The world is looking to us to rise to the greatest challenge of the post-war era: defeating COVID and leading a global recovery driven by our shared values,” the prime minister asserted. “Vaccinating the world by the end of next year would be the single greatest feat in medical history. I’m calling on my fellow G7 leaders to join us to end to this terrible pandemic and pledge we will never allow the devastation wreaked by coronavirus to happen again.”

Former British Prime Minister Tony Blair previously urged Johnson to use the summit to push an international vaccine passport scheme, predicting similar difficulties arising if each individual nation was to design its own unique system for granting cross-border access to vaccinated travelers.

“One [apparent problem] is that everyone just does their own thing, which is much more chaotic and difficult to manage. Or secondly, there’s a set of rules in place that you may not be that happy with,” Blair told the Belfast Telegraph in January. “It’s better to have common rules and a common verification system, so that people know what your disease status is and know it with some validation.”

Blair’s warning was backed by the United Nations World Tourism Organization’s secretary-general Zurab Pololikashvili, who said earlier in January that “[v]accines must be part of a wider, coordinated approach that includes certificates and passes for safe cross-border travel,” favoring an internationally agreed system of vaccine certification.

India’s Health Minister Harsh Vardhan pushed back against Johnson’s passport drive, raising concerns that such a scheme would disadvantage citizens “in developing countries,” where vaccine take-up is “still low compared to developed countries.”

“[S]uch an initiative could prove to be highly discriminatory,” Vardhan emphasized, especially given that India has widely distributed its own Covaxin COVID jab, which has not yet been approved by the World Health Organization (WHO) and could be excluded from an internationally recognized list of vaccines on that account.

Johnson’s push for vaccine passports has been far from a straightforward process, given the U.K. government’s endless U-turning on the issue.

Back in November of 2020, the government began drawing up plans for a national COVID-vaccine QR code system of verification, supposedly allowing vaccinated individuals with smartphones to prove their immunity from COVID-19 by linking the code with their vaccination status.

The next month, Britain’s Parliamentary Under-Secretary of State for COVID-19 Vaccine Deployment, Nadhim Zahawi, told Parliament that the government had “no plans to introduce so-called vaccine passporting.”

Describing the notion of vaccine passports as “discriminatory and completely wrong” at the time, Zahawi explained, “while I am aware that other nations may consider immunity passports alongside vaccination, it is my fervent belief that we must not penalize people who remain unconvinced” in taking an experimental jab.

After another month passed, however, in January 2021, Zahawi backtracked, announcing that the government was “looking at the technology.” Though developers of vaccine passport systems began receiving grants from the government to develop the technology, Zahawi insisted that vaccinating would not become compulsory in order to visit private businesses or otherwise engage in normal day-to-day activities. “People have to be allowed to decide for themselves whether they want to be vaccinated or otherwise,” he affirmed.

But now the U.K. could be forging a path towards mandatory vaccine passports, trialing the technology at the Euro 2020 football tournament beginning this weekend (delayed from last year) by asking spectators to prove their vaccine-positive status before entering the stadium.

Fans will be asked to verify having taken a full regimen (up to two shots) of a COVID vaccine at least two weeks beforehand by using an app developed by Britain’s National Health Service (NHS). Alternatively, for entry into the stadium, guests can show proof of a negative lateral flow test, taken within the last 48 hours.

A report in The Times noted requirements that “[all] ticket holders aged 11 and older must present evidence that they are at a low risk of transmitting COVID-19 to enter Wembley Stadium. Failure to do so will mean you’re unable to attend the match.”

The requirements apply to admittance into London’s Wembley Stadium, but will not apply to spectators at Scotland’s Hampden Park for the international games. Instead, spectators at Hampden will be asked to maintain roughly six feet of distance between themselves and other attendees.

At both stadiums, regardless of vaccine or COVID test status, fans are required to wear face masks throughout the game and are asked to arrive in staggered, 30-minute slots, to stop overcrowding at the gates. Additionally, all celebrations must be physically-distanced, meaning hugging and other contact celebrations will not be tolerated.