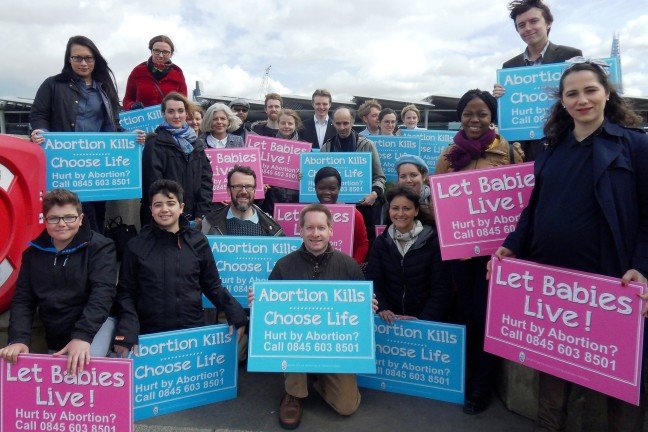 London,  November 6, 2017 (LifeSiteNews) – The Society for the Protection of the Unborn (SPUC) is alerting pro-lifers in the UK that there will be a debate in Parliament tomorrow (November 7) aimed at shutting down public pro-life witness.

For months Huq has been carrying out what pro-lifers say is a vendetta against the Good Counsel Network, a peaceful group of pro-life counsellors and witnesses who meet outside the Marie Stopes (Ealing) abortion business. Huq hopes to get pro-lifers banned, not only from the park across from the Ealing clinic, but from anywhere near a British abortion business, by setting up Canadian-style “buffer zones.”

SPUC has asked British pro-lifers “If you know your MP is pro-life, or supports free speech, please contact him or her and ask them to attend this debate, and speak out in support of peaceful vigils outside abortion clinics.

“Babies are saved because pro-life counsellors are able to offer women help outside abortion clinics. It is essential they are allowed to continue to do this,” said SPUC in a press release.​

URGENT: Contact your MP now to ask them to speak out in support of peaceful vigils outside abortion clinics https://t.co/ZWKsxB6chu

In late October, Claire McCullough of the Good Counsel Network told LifeSiteNews that there was a “two-pronged” attack on the Ealing, London pro-life witnesses: both in the local council [government] and in Parliament. Not only has Rupa Huq has been photographed with a noisy band of pro-abortion demonstrators outside the clinic, she has praised the “Sister Supporters” 18 month harassment of pro-lifers. Meanwhile, she has repeatedly accused the Ealing pro-lifers of aggressive behaviour without offering any evidence.

“The saddest thing is that all their activities are aimed at preventing us from helping (pregnant women),” McCullough told LifeSiteNews.

SPUC is advising British voters that “even a short message” to their pro-life or freedom-of-speech supporting MP would be good.

“Pro-life MPs at this debate can make all the difference,” the group has written.

SPUC is pointing pro-lifers to its “write to your MP” function on its website. Pro-lifers can also find their MP's contact details on the Parliament website.

I am a constituent and have lived in [your constituency] for nine years.  I am writing to ask you to attend a debate in Westminster tomorrow at 4:30 PM.

Rupa Huq MP is holding a debate titled “Public Order legislation relating to family planning clinics.”  She has been campaigning to shut down the freedom of people who disagree with her views on abortion to gather in public and offer alternatives to abortion to women in crisis pregnancies. If you have been following the news, you will note that she is particularly opposed to pro-life people in her own constituency of Ealing.

The Ealing protesters strike me as honest people who are deeply concerned about the lack of counselling and options offered to women in crisis pregnancy by abortion centres. (Rupa Huq has provided no evidence for the harassment of which she accuses the small group of pro-life volunteers.) Meanwhile, the Marie Stopes (Ealing) abortion clinic is rather notorious; a woman died from blood loss after being sent away by cab from the clinic in 2012.

No matter what your views about abortion may be, I hope you are a firm proponent of the freedom of speech for everyone in the UK. It is freedom of speech that Rupa Huq is trying to take away from people whose views on abortion do not correspond with her own.

She is also, incidentally, trying to prevent women from receiving disinterested counselling; naturally one does not expect an abortion business to dissuade women from using its lucrative services. Nevertheless, one would hope that women be permitted the opportunity to make an informed choice and know what ALL our options are.