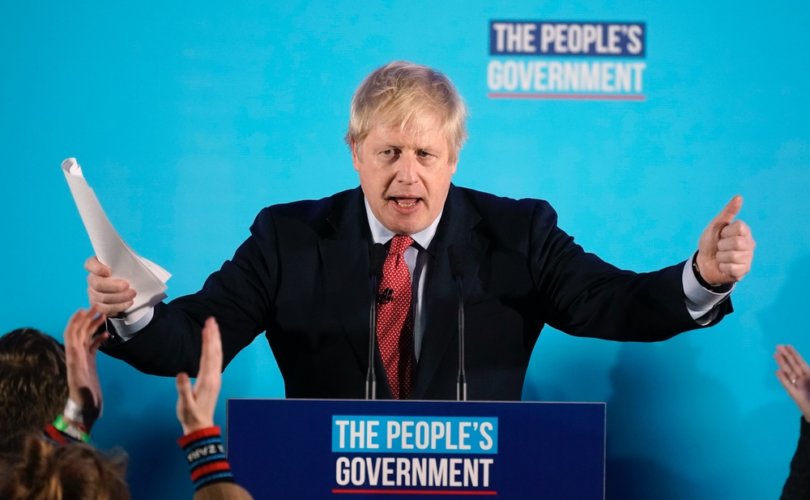 UNITED KINGDOM, December 13, 2019 (LifeSiteNews) – Pro-life campaigners in the U.K. say that there’s “work to be done” and that the pro-life movement “must learn the lessons of history” after yesterday’s general election saw the Conservative Party win its biggest majority since 1987, with Boris Johnson to continue as Prime Minister.

In U.K. general elections, the public votes for one of the candidates in their local constituency to become their Member of Parliament (MP) and to represent that area in the House of Commons. Provided one party gains a sufficiently large majority of MPs that party forms a government and the leader of that party becomes the Prime Minister. The Conservative Party had a total of 365 MPs elected to Parliament, while the other parties combined had a total of 285, giving the Conservatives a majority of 80.

The two political parties who promised in their election manifestos to “decriminalise” and radically deregulate abortion (which is already widely available in the UK), Labour and the Liberal Democrats, both suffered significant losses. The Labour Party won 59 fewer seats in parliament than in the 2017 election, while the Liberal Democrats dropped one seat and their leader, Jo Swinson, failed to be re-elected. Swinson, who had promised to introduce an “X” gender on British passports, has stepped down from her position as leader of the party.

The newly formed Brexit Party, led by Nigel Farage, failed to win a single seat but has been credited by some for having assisted the Conservatives in obtaining their victory, particularly through having taken a significant number of votes away from the Labour Party in areas which were then won by the Conservatives.

Implications for the pro-life movement

Antonia Tully, Director of Campaigns for the Society for the Protection of Unborn Children (SPUC), said: “No prominent pro-life MP on the mainland has lost their seat. Anti-life MPs who lost their seat[s] include Anna Soubry, Paula Sherriff, Chuka Umuna[,] and Dennis Skinner.”

“Now [that] they are MPs, SPUC supporters must make sure that that they stick to their pre-election statements,” said Tully.

“There are many marginal seats in Scotland and the pro-life vote is therefore important,” said John Deighan, SPUC Scotland CEO. “It is very significant that Jo Swinson, the leader of the Lib-Dems with a manifesto commitment to extend abortion, has lost her seat in Scotland.”

“The collapse of the Labour party is another significant dimension of the result. The Labour party also took a radical pro-abortion position in its manifesto and Labour now seems to have truly lost swathes of traditional votes that it once relied on in Scotland.”

SPUC’s Northern Ireland Political Officer, Liam Gibson, said: “Northern Ireland now has four new MPs who advocate the decriminalisation of abortion. Three of these will take their seats in the House of Commons.”

“However, it will be the Stormont Assembly election expected in the Spring which will be decisive for efforts to repeal Section 9 of the Northern Ireland Executive Formation Act 2019 and the restoration of legal protection for unborn children in the Province,” he explained.”

“The role of pro-life MPs within the Conservative Party will also be essential in any attempt to block the extremist agenda which Boris Johnson’s government was pushing through in Northern Ireland before the election. This agenda threatens to impose on the Province the most extreme abortion regime in Europe but it is merely the first step in the decriminalisation of abortion in England, Scotland and Wales.”

The Conservative party has won their biggest parliamentary majority since 1987. Whilst it is good that the party forming the new Government does not have a policy to decriminalise abortion, we must learn the lessons of history.

Margaret Thatcher’s Conservative government elected by a huge majority in 1987 had no party policy on abortion. However, they introduced legislation which, with their backing, legalised abortion up to birth and human embryo research.

David Cameron’s Conservative government, elected in 2010, had no party policy on same-sex marriage. However they introduced legislation to legalise same-sex marriage, championed by David Cameron, the Prime Minister, and with Boris Johnson saying on Sky News in December 2012, “Let’s whack it through [Parliament].”

And Teresa May’s Conservative government, elected in 2017, had no party policy on abortion. However, from the very start of her period of office, she promoted abortion for abortion in Northern Ireland leading to legislation imposing the worst abortion law in Europe on Northern Ireland, against the will of all Northern Irish MPs who took their seats in the House of Commons.

Pro-lifers must also vigorously oppose a political deal on abortion – allowing abortion up to so many weeks’ gestation with the inevitable exceptions up to birth. This was the tragic mistaken deal backed by pro-life groups in 1990. It’s both unethical and led to abortion up to birth. The pro-life movement must never again trade the lives of unborn children to reach a political settlement on abortion.

Dec. 16, 2019 update: Anthony Mangnall (Conservative elected to the constituency of Totnes) was removed from the list of pro-life MPs after evidence surfaced that he might not be sound on assisted suicide.