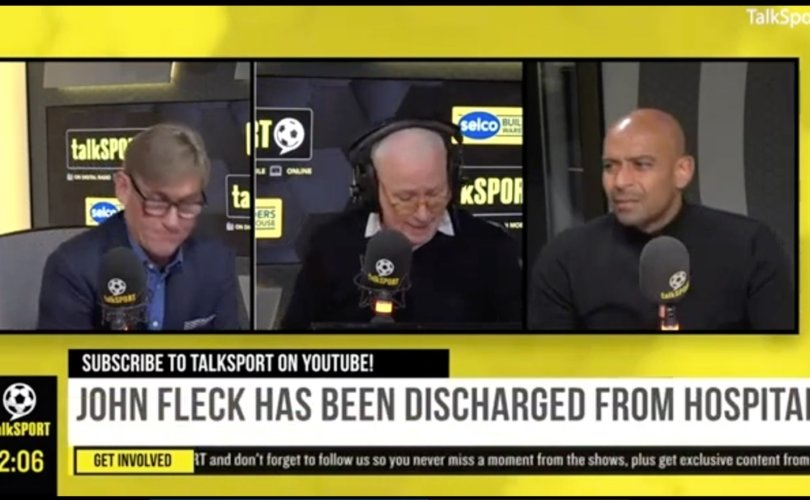 LONDON, England (LifeSiteNews) – A major British sports broadcaster cut off one its presenters Wednesday after he suggested that the sudden collapse of another soccer player could be related to a COVID-19 vaccine.

Presenters on the TalkSport radio station were discussing the recent on-field collapse of footballer John Fleck, when ex-England soccer professional Trevor Sinclair interjected to suggest that “everyone wants to know if he (Fleck) has had the COVID vaccine.”

Before Sinclair had finished saying the word “vaccine,” producers had cut the feed, later removing the segment from their archives entirely.

After being cut off on live radio, Sinclair took to Twitter to raise his concerns about heart problems arising among sportsmen of late, saying “Everyone I speak to about these heart problems suffered by footballers (which worryingly seem to be happening more regularly) are they linked to Covid vaccines or not??”

Everyone I speak to about these heart problems suffered by footballers (which worryingly seem to be happening more regularly) are they linked to covid vaccines or not??

According to the BBC, 30-year-old Fleck collapsed “unchallenged” in the middle of a game on Tuesday evening. It is unknown whether the sportsman has received the jab, though some of his Sheffield United colleagues have. Fleck was also rushed to hospital in February this year for undisclosed reasons.

The Daily Mail reported that 28-year-old striker Charlie Wyke was admitted to hospital Monday following a collapse during a training session. His condition is said to be stable.

Just a day later, fellow soccer star Adama Traore suffered a sudden heart problem, clutching his chest and falling to the ground as the game headed into the final ten minutes.

Doctors rushed to the scene to provide “urgent medical attention” to the 26-year-old athlete, according to a report in the Mirror.

Both Traore’s and Wyke’s “vaccine” status is unknown at this time.

Last month, superstar Argentinian striker Sergio Aguero fell to the ground, grasping at his chest during a match, quickly being transported by ambulance to a nearby hospital. The 33-year-old was later diagnosed with a heart condition.

While his vaccination status is unknown, Aguero was an advocate of the jab for children, promoting the shot for people aged 12 and over in a September video.

Following Fleck’s collapse, former England soccer professional and pundit Matt Le Tissier called for an “investigation” into the cause behind the sudden injuries of the growing list of professional athletes collapsing without warning.

Le Tissier later posted a follow-up tweet, this time directed towards FIFPro, the international body representing professional soccer players. “[A]re you not a little bit concerned about how many of your members are suffering heart problems during matches?” he asked, adding “[if] you are what action are you taking on behalf of them?”

Indeed, heart problems such as myocarditis and pericarditis have been consistently linked to the abortion-tainted COVID jabs, particularly among young men. The U.S. Vaccine Adverse Event Reporting System (VAERS) has 9,332 heart attacks records on its database for the COVID jabs and 12,237 reports of myocarditis and pericarditis since the shots started to be administered on December 14, 2020.

Earlier this month Dr.  Michael Yeadon, a former VP of Pfizer, compiled multiple recent examples of athletes dying or becoming seriously injured, and noted how rare such occurrences used to be.

Yeadon said at the time: “These vaccines induce the body to manufacture unregulated amounts of virus spike protein. Not only are the amounts uncontrolled in any way, we also have no idea, in any individual, WHERE in the body this dangerous protein is made.”

Dr. Robert Malone, M.D., a pioneer of the mRNA technology used in vaccines, has also flagged the mounting reports from around the world detailing athletes being seriously injured and dying unexpectedly in the middle of games, mostly from heart-related problems.

Safe and effective? Are these the vaccines that you want to have mandated for injection into your children, California parents?
Let’s go Gavin! pic.twitter.com/LYrN0K8I34

“Safe and effective? Are these the vaccines that you want to have mandated for injection into your children?” he asked.