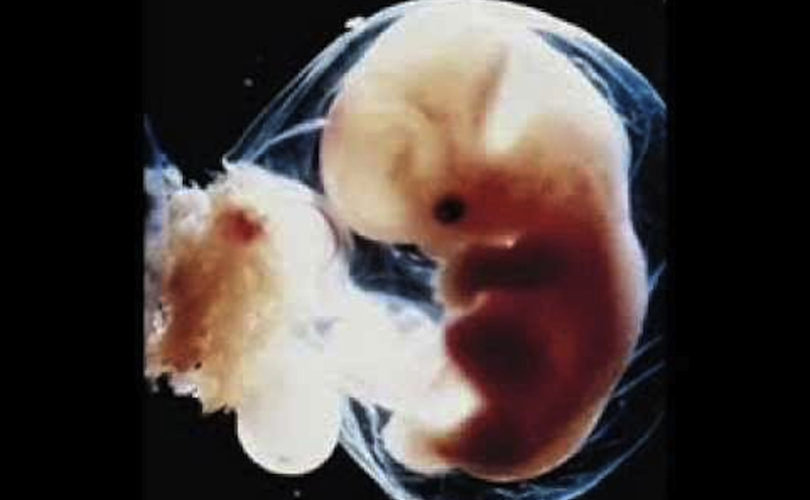 UNITED KINGDOM, October 13, 2016 (LifeSiteNews) — Research on live mice has led scientists to conclude that the human heartbeat might begin as soon as 16 days after conception and before most women even realize they have missed a period.

Mary Ellen Douglas of the Campaign Life Coalition of Canada told LifeSiteNews that “science is catching up with what we always have known, that life begins with union of the sperm and ovum and what is in the womb after that is a human being with its own DNA, and with its own heart pumping its own blood.”

Carol Tobias of U.S. National Right to Life agreed. “This will make it much more difficult [for abortion advocates] to pass off the unborn child as a ‘blob of cells’ if the heart is already beating.”

The Oxford University study shows that the heart muscle in mice under examination started to beat after 7.5 days — the equivalent of 16 days in human embryos, or a week earlier than previously thought.

Previously, the heart was believed to start beating once it had developed into a tube, but the Oxford discovery places the heartbeat at an earlier stage when the heart muscle forms into a crescent shape. The team detected the muscle was beating in response to regular “pulses” of calcium that kept up until the heart could beat on its own.

“The heart is the first organ to form during pregnancy and is critical to providing oxygen and nutrients to the developing embryo,” the University of Oxford reported. In other words, the human heart, even well before its full development, is already doing its job only 16 days after conception.

Oxford University quotes Professor Paul Riley, the research team spokesman, as saying, “We are trying to better understand how the heart develops, and ultimately what causes heart defects that develop in the heart before birth and to extrapolate to adult heart repair.” He added, “We are one step closer to being able to prevent heart conditions from arising during pregnancy.”

Douglas told LifeSiteNews that abortionist-turned-pro-life crusader Dr. Bernard Nathanson predicted 20 years ago that the heartbeat would be discovered to be much earlier than thought as soon as better instruments were developed.

“It won’t change the thinking of pro-abortion people,” she added. “None is so blind as those who will not see. But this reinforces the fact that there is a human being in the womb directing its own growth and development. And that’s true even before the heart starts beating, from conception.”

Tobias said the heartbeat discovery probably wouldn’t have much impact at the level of Congress. “However, many states have laws that require the abortionist to provide a woman seeking abortion with specific information about her baby and the abortion in what are called ‘right to know’ or ‘informed consent’ laws. With this new information, women seeking an abortion early in the pregnancy would be told her baby's heart may already be beating.” She added, “Hopefully, that would be a tremendous incentive not to go forward with the abortion.”