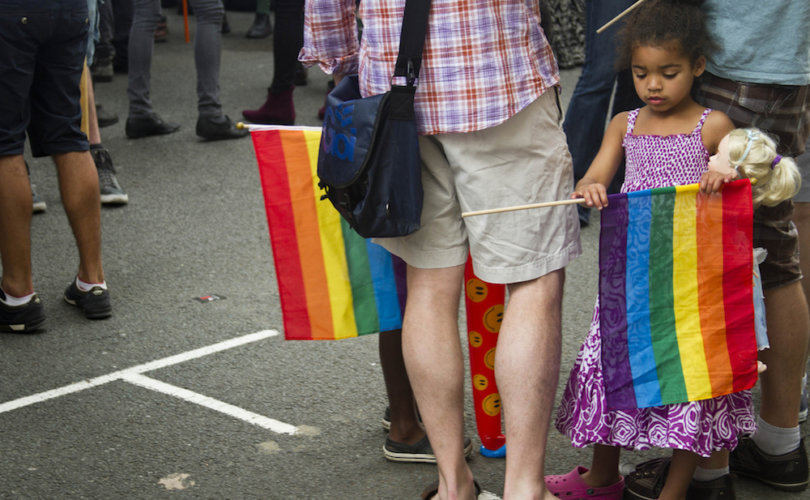 UNITED KINGDOM, December 3, 2019 (LifeSiteNews) — A major LGBT lobbying group has produced sweeping guidelines for British schools designed to indoctrinate children beginning at age 5 in every primary school subject area and in every grade level by embedding gay, lesbian, and transgender themes and examples.

The “voluntary guidance” authored by Stonewall, an LGBT lobbying group roughly equivalent to the Human Rights Campaign (HRC) in the United States, was sponsored by the Government Equalities Office (GEO) and Pearson, a U.K.-based education assessment and publication powerhouse, using a £1-million grant awarded to LGBT organizations, according to a report in the Sunday Times.

The effort is timed to coincide with the new relationships and sex education (RSE) courses scheduled to take effect in September, 2020. While parents will be permitted to exempt their children from lessons on sex, the relationships portion of the curriculum is mandatory.

A review of the suggested guidelines, which touch upon every area of study, reveals an unvarnished intent to thoroughly normalize homosexuality, transgenderism, and LGBT relationships in young minds.

The 56-page document, titled  “Creating an LGBT-Inclusive Primary Curriculum,” targets every subject a young student encounters, including math, science, and even physical education and religion classes.

Here are some suggestions from the guidebook, revealing a constant emphasis and repetition of examples focused on households headed by two gay dads or two lesbian moms:

Publication of the guidelines met with a sudden backlash.

Tanya Carter of the Safe Schools Alliance —a group of concerned parents, grandparents, teachers, and others— told the Times, “We are concerned that the aim of challenging homophobia is being used to sneak gender ideology into the curriculum.”

“It is being taught as fact that children can be born in the wrong body and are able to change sex, neither of which is true,” she added.

Andrea Williams, chief executive of Christian Concern, told the Times that Stonewall’s campaign for “acceptance without exception” as disguising a “manipulative agenda aimed brazenly at our youngest and most impressionable.”

“The innocence of our children is being robbed by introducing them to concepts they cannot be expected to understand and from which they should be protected,” continued Williams. “This curriculum is deeply subversive. It should be scrapped.”

“Stonewall has been going into schools for some years now…. Why?” asked Dr. Sarah Rutherford. “It is a lobby group that is pushing an ideology of gender identity under the LGBT banner. What better way than having access to young impressionable minds. This is not for children’s benefit.”

Stonewall has been going into schools for some years now…. why? It is a lobby group that is pushing an ideology of gender identity under the LGBT banner.What better way than having access to young impressionable minds. This is not for children’s benefit.https://t.co/58k5gxhSQh

“Stonewall has lost it,” asserted Wendy Wheeler. “This is where the worthy liberal aim of equality for all slips into hyper-liberal extremism which is socially destructive.”

@StonewallUK has lost it. This is where the worthy liberal aim of equality for all slips into hyper-liberal extremism which is socially destructive. @AllianceLGB are rightly trying to correct this lunatic extremism. https://t.co/UodUtP4IbI

“The state continues to drive a wedge-like stake between concerned parents & so-called education trailblazers who work in our kid’s Primary Schools,” tweeted Let Kids Be Kids. “All with the full autonomy for implementation in the hands of individual Headteachers.”

The state continues to drive a wedge-like stake between concerned parents & so-called education trailblazers who work in our kid's Primary Schools.

All with the full autonomy for implementation in the hands of individual Headteachers.https://t.co/lK8Dx8m87Z