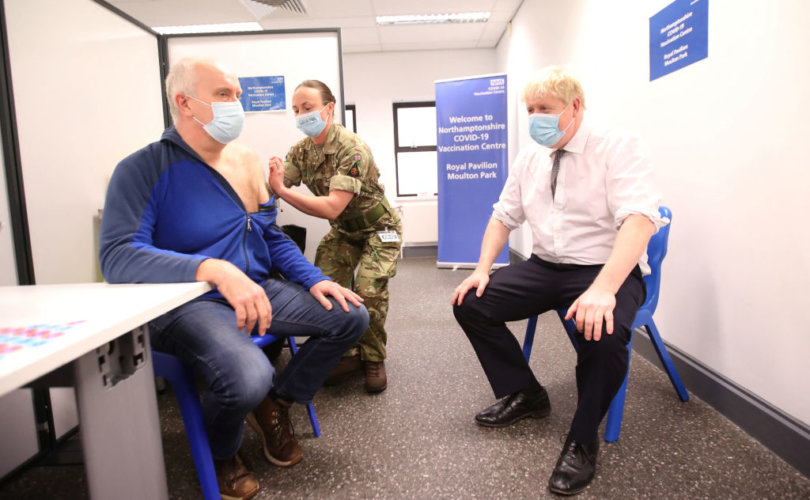 Boris Johnson watches as a COVID jab is given January 6, 2022 in Northampton.Peter Cziborra-WPA Pool/Getty Images

LONDON (LifeSiteNews) – Boris Johnson’s government remains committed to sacking UK healthcare staff in a matter of weeks if they do not take the COVID-19 injections, despite repeated warnings from politicians, journalists, and healthcare staff themselves that such an action will be “catastrophic.”

Frontline National Health Service (NHS) and social care staff in the U.K. have until February 3 to take the first dose of a COVID-19 injection, and must have two doses by April 1 or face the sack as part of laws approved by the government on December 14, 2021.

The move has been described by TalkRadio host Kevin O’Sullivan as “an act of self-harm.”

The NHS will start sacking unvaccinated staff early next month.

But Kevin O’Sullivan says it’s “like an act of self harm”.

“Let the doctors and nurses stay, they are marvellous people who have the right not to be vaccinated. Do not fire them for making that choice.”@TVKev pic.twitter.com/qQw1SOE7zO

At the time the law was passed, 94,000 staff in the NHS alone were unvaccinated. More recent figures suggest that at least 80,000 NHS staff still do not meet the government’s “vaccination” requirements, as official NHS guidance warns that unvaccinated staff will face formal meetings from February 4 warning staff of dismissal.

The Telegraph reported that “Dismissal notices will start being issued from that day, with the notice period ending on March 31.” Staff will have to provide evidence of their vaccines, or their approved exemption from vaccination

As hyped-up fears over the omicron variant subside, the Royal College of Nursing and the Royal College of Midwives have joined thousands of NHS staff in urging government ministers to postpone the mandate. The RCN described the jab mandate as “an act of self-sabotage” and the RCM warned of the “catastrophic” effect it would have on maternity services across the country.

The government is not unaware of such an effect, though, as its own assessment (Table 1) in November suggested that 73,000 NHS staff could leave over the mandate. This figure is in addition to the already existing 100,000 NHS vacancies.

A growing number of politicians across the political divide are protesting the mandate, including David Davis, a currently high profile sceptic of Prime Minister Boris Johnson.

.@theRCN and the @MidwivesRCM are right. The NHS vaccine mandate will be catastrophic to the NHS.

The loss of staff will limit the NHS’ ability to maintain proper service and catch up with the backlog caused by Covid.https://t.co/2uyDfxC5RR

As February 4 draws ever nearer, a group of NHS staff has been set up, called “NHS100k” after the amount of staff still predicted to leave over the mandate. The movement is galvanizing NHS staff to wear a purple ribbon on their uniform to demonstrate their rejection of the jab mandate.

“We need to take action to stop any vaccine mandate coming in. If the government can infringe basic human rights for NHS staff, they WILL do this upon the general populace thereafter,” the group warns.

Members of the group have made numerous media appearances in recent weeks, including Dr. Steve James, who recently challenged Health Secretary Sajid Javid over the mandate. James warned that the mandate would “almost double” the vacancy list “overnight.”

Dr Steve James, who clashed with Sajid Javid over sacking unvaccinated NHS staff, tells Mike the NHS is looking at around “80,000 members of staff who will be out of work” due to the ‘no job, no jab’ policy.

Matt Taylor, a paramedic who worked through the COVID era, defended his decision to remain unjabbed despite the risk of losing his job, “because it’s about bodily autonomy.”

Meanwhile, Dr. Karol Sikora, a 50-year veteran oncologist and one of the original co-signers of the Great Barrington Declaration, rebuffed the mandate, noting how despite being “triple-vaccinated” did not stop him from catching COVID-19.

Data released by January 13 by the U.K. government reveals that in every age group other than the under-18s, there were more COVID-19 “positive” results found in vaccinated people than in unvaccinated individuals. Such finding led some to suggest that the government’s commitment to the jab mandate “must be malicious. It is not public health.”

Despite this, both Johnson and Javid have committed fully to the mandate, with Johnson remarking in Parliament that “it is a professional responsibility of everybody looking after the health of others within our NHS to get vaccinated.” The Prime Minister doubled down later, saying “the evidence is clear that healthcare professionals should get vaccinated.”

Javid, told in an interview that “there really isn’t any moral or medical case” by which to support the mandate, replied that it was about “patient safety.” He highlighted the now 94% of NHS staff who had taken an injection.

Saffron Cordery, deputy chief executive of NHS Providers, described the staffing situation as “concerning,” but also defended the mandate, saying NHS managers would “support vaccine-hesitant staff while managing the significant risks presented by this policy in the coming weeks.”

However, The Daily Sceptic were less supportive of the government’s mandate than Cordery, describing the forthcoming mass sacking as a punishment of “free riders.”

There it is in black-and-white: they’re not being sacked because they’re deemed unsafe, but because others have been vaccinated and they’re perceived as free riders.

It’s not about patient safety (how much difference will the last 6% really make to transmission, even if you assume the vaccines are highly effective against Omicron, which they’re not) but about vindictive, self-defeating politics that will only worsen the NHS staffing crisis and mistreat thousands of hard-working people who were heroes until last week. The Government needs to U-turn on this now before it makes yet another unforced error and further undermines its authority and support.”

Data from the Centers for Disease Control and Prevention (CDC) in the United States document a total of 1,033,994 reports of adverse events self-reported following COVID vaccines. The figures included a total of 21,745 reports of deaths and 170,446 reports of serious injuries, including deaths.