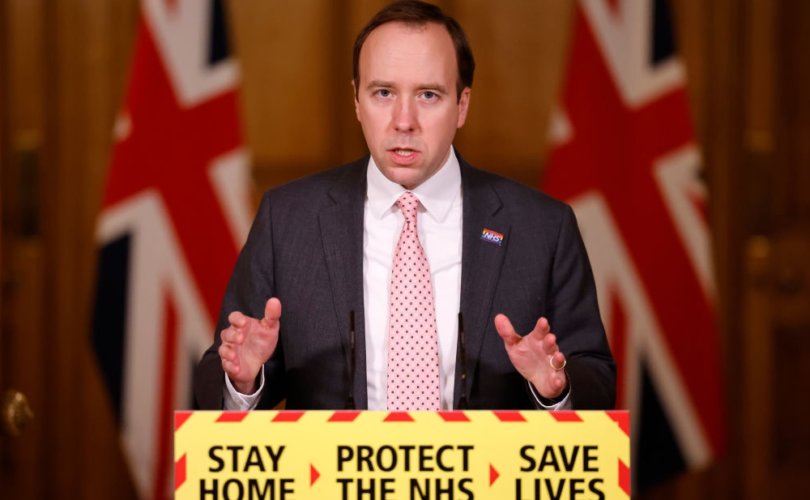 WESTMINSTER, U.K, February 10, 2021 (LifeSiteNews) – The U.K. Health Secretary, Matthew Hancock, has announced that those who lie when filling in a new COVID related travel arrival form, could face ten years in jail, more than is possible for some child sex offences.

In the latest of the increasingly severe restrictions imposed upon the British public in the name of preventing the spread of COVID-19, Hancock announced in the House of Commons yesterday that travellers arriving into England could face a £10,000 fine, or prosecution and up to ten years in jail, if they lie about which countries they have been to in order to avoid the new mandatory hotel quarantine.

The measures are focused on passengers returning from the recently designated “red list,” countries which have been listed by the government as being at high risk or with suspected COVID-19 variants in the population. Flights are suspended between these countries, currently numbering thirty-three, and only U.K. residents can arrive from such countries. Included among the list of thirty-three are countries such as Portugal, South Africa, Zimbabwe, the U.A.E. and several countries in South America.

On February 9, Hancock revealed the new rules as the latest measure in the “fight against this virus.” With effect from February 15, all arrivals to England will be forced to take two COVID-19 tests, on the second day and then the eighth day after arrival.

Despite all passengers having to provide proof of a negative COVID test three days before their departure, if passengers are coming from the “red list,” the first ten days after arriving in the country will be spent in forced quarantine in hotel rooms, which the government has procured for this purpose.

The government mandated hotel quarantine will cost £1,750 per person and will be paid for by each traveller. Three meals a day will be provided in the rooms, and the corridors will be patrolled by security guards, to “ensure compliance,” and that no one leaves their rooms. Breaking the news about the arrangements, The Telegraph wrote that it was “like a description of Soviet-era Russia.”

Passengers will have to pre-book the expensive isolation period before beginning their travel, and will be taken straight to the isolation center upon arrival.

Those who arrive from counties not on the red list, will not be subject to the hotel quarantine, but will have to “self-isolate” for ten days at home instead.

In addition to this, all passengers will be ordered to complete a “passenger locator form” which will detail the journey undertaken, as well as the details for their quarantine and testing. If anyone lies on the form, attempting to hide the fact they have arrived from a red list country, they could face a £10,000 fine or prosecution and up to ten years in prison.

Commenting on the proposals, which have yet to be placed into law, Hancock said to the House: “I make no apologies for the strength of these measures. Because we’re dealing with one of the strongest threats to our public health that we’ve faced as a nation.”

LifeSiteNews contacted the Department of Health and Social Care for a comment about the measures, but was simply directed back to Hancock’s comments.

Notwithstanding the ten-year jail sentence, Hancock also unveiled a number of other fines which could be given to passengers who fail to quarantine, or fail to take one of the number of mandatory tests. These range from £1,000 to £10,000.

The ten-year jail sentence for lying on the locator form, is considerably more than is currently given as a penalty for a number of crimes. Should it be passed into law, it would be on a par with crimes such as indecency with children, sexual assault, rioting and making threats to kill, which all carry a maximum of ten years in jail.

Trespassing with a firearm, carrying a firearm in public, causing grievous bodily harm, along with attempting to have sexual intercourse with a girl under thirteen years old, and causing prostitution for gain, all have a maximum penalty of just seven years.

Female circumcision, abandoning a child aged under two, possessing indecent images of children, are all penalised by a maximum sentence of five years in jail.

With this contrast in mind, Hancock’s new proposals have caused a severe backlash, including from many in his own Conservative party, and concerned members of the public. Sir Charles Walker MP,  a vice chairman of the influential 1922 Committee, stated that the government was “going full North Korea,” adding that Hancock’s decision was “very dangerous” and “a really stupid thing to say.”

Former Supreme Court Justice, Lord Sumption, has written a scathing column in The Telegraph, in which he said that Hancock’s “connection with reality, which has been getting looser for some time, has finally snapped.”

Sumption described the mandatory, security guard patrolled hotel quarantine as “brutal, inhumane and disproportionate,” and also “economically extremely destructive.” The government “is not a natural tyrant, but it believes, like every tyrant that ever lived, that the end justifies the means,” Sumption declared.

Speaking to LifeSiteNews, Heritage Party leader and 2021 London Mayoral candidate David Kurten said: “The U.K. government’s latest announcement of prison sentences up to ten years simply for travelling back from countries like Portugal or Tanzania without declaring it is deplorable and draconian. Matt Hancock in particular has completely lost touch with reality and is acting like a tyrannical prison guard in the Stanford Prison Experiment.”

Kurten, who is a firm pro-lifer and a Christian, continued: “The lockdown itself is unnecessary and disproportionate, and destructive to society as it decimates civil liberties, businesses, mental health and children’s education. Increasing numbers of people are appalled at the Johnson government’s actions and are questioning and challenging the fabricated narratives spun by their behavioral psychologists, despite this latest raging threat against citizens.”