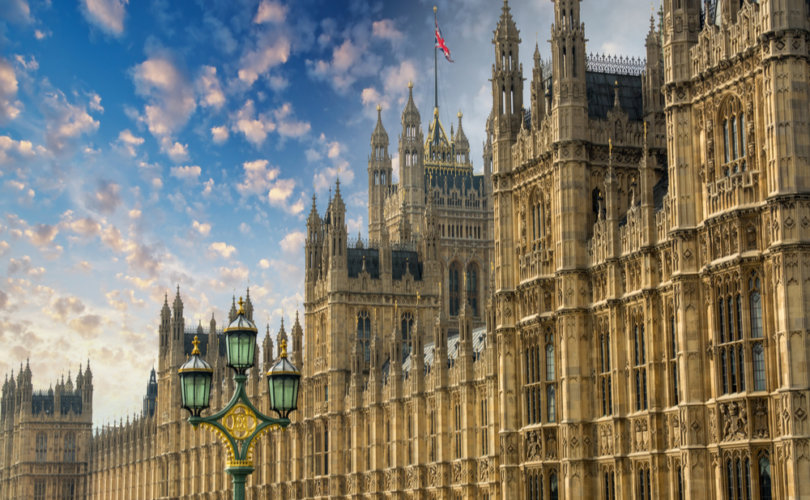 WESTMINSTER, England (LifeSiteNews) — Britain’s House of Lords struck down an attempt to legalize assisted suicide in England and Wales Wednesday night, rejecting an amendment to the Health and care Bill which would allow terminally ill adults to seek medical assistance to take their own lives.

The amendment, sponsored by Lord Forsyth, was voted down by 179 votes to 145 Wednesday evening, marking the twelfth time that such bills have failed to pass through Parliament in the last 25 years.

Forsyth proposed amending the Health and Care Bill currently making its way through the U.K.’s upper House to include a clause on “assisted dying.” The amendment demanded that the “Secretary of State must, within the period of 12 months beginning with the day on which this Act is passed, lay before Parliament a draft Bill to permit terminally ill, mentally competent adults legally to end their own lives with medical assistance.”

Speaking in the House of Lords last night, Forsyth argued that the amendment “has nothing whatever to do with the wrongs and rights of assisted dying [suicide],” stating that rather it is to enable assisted suicide “to be properly considered by Parliament” while the public “are crying out for this to be done.”

Contesting Forsyth’s assertions, Lord Howarth said that the “compassion and kind intentions” of those who support the proposal “misreads human nature,” adding that legalizing assisted suicide “would create more suffering [than] it would alleviate.”

“The offspring of this compassion would be a coarsening of our society and a diminution of the value we place upon life,” Howarth determined.

Baroness Campbell of Surbiton, founder of the disability rights campaign group Not Dead Yet U.K., fiercely opposed the amendment as bringing “lethal consequences” which would result in “some vulnerable people needlessly taking their own life.”

Forcing the government to draft a bill on assisted suicide within 12 months, she said, would be a “blatant manipulation of the parliamentary process” and set a “dangerous precedent and should be resisted.”

Following the defeat of the proposed amendment, Campbell celebrated its failure to be passed “by the back door” and stressed that disabled people “want support to live, not support to die.”

Ciarán Kelly, head of communications at lobby group The Christian Institute, said that the proposal’s defeat closes off “a real threat to the lives of vulnerable people.”

“Recent scandals over blanket use of ‘Do Not Resuscitate’ orders showed that, sadly, some health professionals have lost sight of the value of human life,” Kelly explained, adding that “[w]eakening the law would have put vulnerable people under pressure to end their lives for fear of being a financial, emotional or care burden on others.”

Not only would vulnerable individuals be opened up to undue pressures and being taken advantage of, but Kelly contended that the amendment “clearly breached the Sixth Commandment and denied the value of every person as an individual made in the image of God.”

While proponents of assisted suicide have tried to show that permitting physician assisted killing in law can be “safe,” “international evidence shows it is impossible to establish sufficient safeguards to protect vulnerable people once the law is liberalised,” Kelly noted.

“Keeping assisted suicide illegal is the only safeguard,” he said.