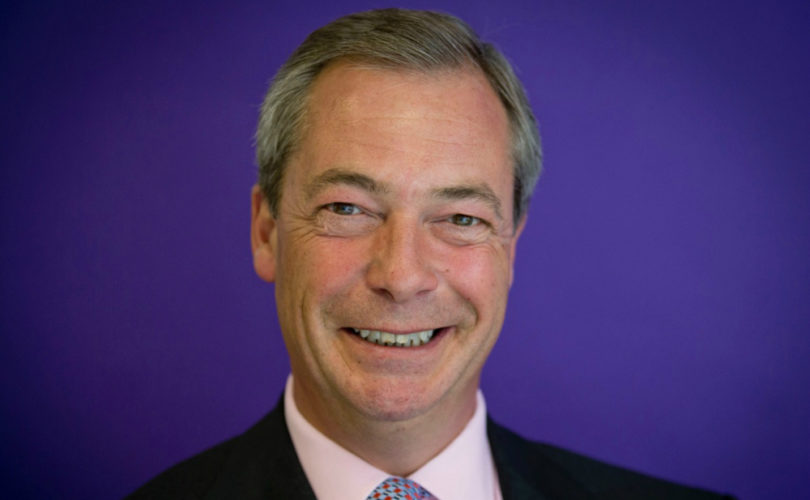 LONDON, May 5, 2015 (LifeSiteNews.com) – In sight of this month’s general election, the United Kingdom Independence Party (UKIP) has issued a manifesto of its adherence to Christian values, saying that there must be a more “robust” defence of Christianity. The party’s leader, Nigel Farage, stated that the political class in Britain has lost sight of the nation’s Christian roots.

“We will uphold robustly the rights of Christians, as well as those of other faiths, to worship as they wish and to espouse their beliefs openly, within the limits of the common law,” the party said in its “Christian manifesto,” thus far, the only such document produced by any British political party.

UKIP says the party is “proud of Britain’s Judaeo-Christian heritage,” which it says “underpins our culture, our legal code and our system of governance.”

“We will stand up for it because we believe it is as integral, relevant and important a part of life in Britain today as it has ever been.”

“Sadly, I think UKIP is the only major political party left in Britain that still cherishes our Judaeo-Christian heritage. I believe other parties have deliberately marginalised our nation’s faith, whereas we take Christian values and traditions into consideration when making policy,” Farage said.

“Traditional Christian views of marriage and family life have come under attack of late,” he added.

The party’s manifesto says, “We recognise the valuable role played by the traditional family unit in society and will never discriminate against traditional marriage.”

“This does not of course mean we should be disrespectful of other faiths, only that ours is fundamentally a Christian nation and so we believe Christianity should be recognised by Government at all levels,” the document continues.

As for the life and family issues, UKIP has, perhaps uniquely among Britain’s leading political parties, dared to propose a new limit to abortion, saying they “will encourage compliance with the Abortion Act 1967 and seek to make gender abortions illegal.”

Currently, the Abortion Act allows direct abortion under a given set of specific grounds that must be declared by the mother seeking an abortion, making abortion on the basis of the child’s sex illegal. But the application of the law is in a grey area, with authorities refusing to prosecute demonstrated examples of sex-selective abortion.

In 2012, after a major newspaper caught physicians on camera ignoring the law, the Department of Health stated, “Criminal offences may have been committed and we will take urgent action.” However, after a year of investigation and ambiguous statements, the office of Public Prosecutions said in 2013 that the law “does not prohibit” such abortions, and the matter was dropped. Nevertheless, the law still regards abortion as a criminal offence under the Offences Against the Person Act of 1861 if they are found to fall outside the allowable grounds.

The same investigation by the Daily Telegraph found that abortion facilities also routinely allow women to abort without being personally assessed by two physicians – also a requirement of the law – with pre-signed consent forms being held ready to use.

UKIP’s manifesto says they have “no plans to change existing legislation on euthanasia or the ‘right to die,’” meaning that the current law that makes “assisted suicide” a criminal act would not be changed under a UKIP government.

The party is less “robust” in its response to the current legislation creating “gay marriage,” brought in by Prime Minister David Cameron’s Conservative government. The manifesto says that the imposition of the legislation “impinged upon the beliefs of millions of people of faith.”

“Rushed through Parliament without proper public debate, the legislation is significantly flawed. It should have been subject to a review of the state’s role in marriage,” the document continues.

However UKIP would not repeal the law, “as it would be grossly unfair and unethical to ‘un-marry’ loving couples or restrict further marriages, but we will not require churches to marry same-sex couples.”

The document adds, “We will also extend the legal concept of ‘reasonable accommodation’ to give protection in law to those expressing a religious conscience in the workplace on this issue.”

The Christian Legal Centre, which has defended many Christians who have suffered legal actions in recent years for expressing their faith, explained that the phrase, “reasonable accommodation” refers to the requirement that employers make allowances for an employee’s “conscience and religious identity unless they can show that doing so would place an undue burden on the employing organisation.”

The CLC has long argued that “reasonable accommodation” is an “important first step in securing better protection of Christian freedom and resolving the so-called 'clash of rights’ that has seen many cases come to court in recent years.”

CLC Chief executive, Andrea Williams, said, “All our Christian freedom cases in recent years could have been resolved quickly and simply if ‘reasonable accommodation’ had been practised.”

“So it is a big step forward that one of the major parties is calling for it to be enshrined in law. Now we need the other parties to catch up and echo this commitment ahead of the election,” she said.