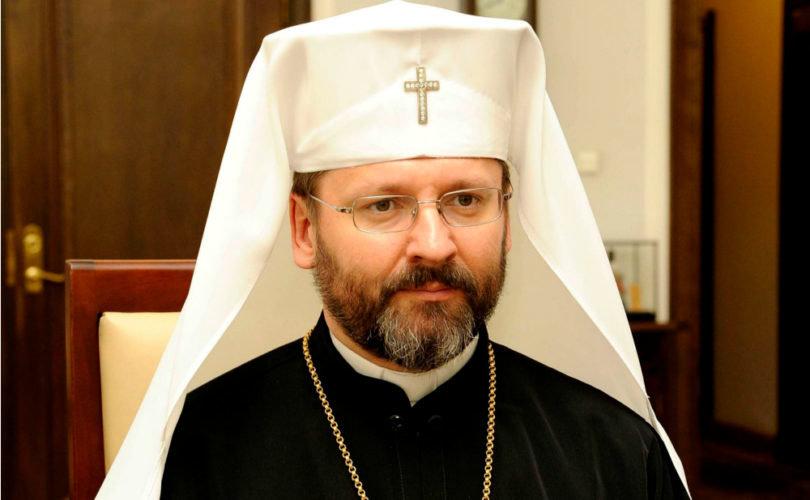 KIEV, Ukraine, January 15, 2016 (LifeSiteNews) – The head of the Ukrainian Greek Catholic Church has condemned the “gender ideology” behind anti-discriminatory amendments to the country’s labour code, arguing that any further recognition of homosexuality would lead to the destruction of the family.

Major Archbishop Sviatoslav Shevchuk’s comments came in a sermon last week delivered on the Marian feast of the Theotokos or “Mother of God.” He first condemned abortion, then linked it to homosexuality. “Today we are observing a very interesting and dangerous phenomenon – in a global dimension a new ideology tries to destroy the family institution” and threatens “a new enslavement of Ukrainian people. This danger is called gender ideology. This is one more way to kill a life.”

The major archbishop said the ideology argued that the family was not a God-given institution but merely a social construct which could be “erected and dismantled.” He cited Pope Benedict XVI as saying gender ideology was similar to previous totalitarian systems that attempted to destroy “the foundation of  a humanity, [because] the family institution is much older than nation or state institutions.”

He concluded, “So let us pray together in this holiday for the Ukrainian family, for fathers and mothers, who follow their parental vocation faithfully and give Church and nation new children. Thus, they give us all a future.”

Major Archbishop Sviatoslav was responding to the November passage of amendments by Ukraine’s Parliament which specify sexual orientation and gender identity as categories protected from employment discrimination. Church organizations fear this will force them to hire practising homosexuals even though the Christian faith condemns homosexual relations. The Ukrainian Greek Catholic Church had proposed wording that simply prohibited discrimination of any kind.

Ukraine bans same-sex “marriage” in its Constitution and a majority of members initially opposed the widening of the code, a move prompted by the European Union’s insistence on it if Ukrainians were to be allowed into EU countries without visas. Even then, supporters of the changes in the very factionalized Parliament had to move the amendments seven times over several days, with much arm-twisting at each juncture, before the requisite support was assembled on November 12.

Even the man who engineered the final and successful vote, the parliamentary speaker Volodymyr Groysman, said he was no fan of the homosexual agenda, insisting the anti-discrimination amendment had no bearing on larger issues. “God forbid same-sex marriages in our country,” he told fellow deputies.

STORY: Ukrainian Catholic patriarch argues that 'sin of homosexuality is comparable to that of murder'

In condemning the labour code amendment, His Beatitude Sviatoslav was repeating earlier arguments from the conference of Ukrainian bishops, and from the All-Ukrainian Council of Churches and Religious Organizations, representing several Orthodox communions and Judaism along with Catholics. The council warned that the labor code amendments will be followed by restrictions on free speech, employment quotas for homosexuals, and legalization of same-sex “marriage.”

Archbishop Yevstratii, spokesman for the Ukrainian Orthodox Church, said at a council press conference held after the amendments had passed that they were based on an ideology rather than morality. “There is a mechanism of natural sexual union between man and woman. But one cannot claim the naturalness of same-sex relationships, because there is no natural way for men to unite sexually.”

The Orthodox archbishop said that the gender ideology behind the labour code changes was one more “social experiment” in a long series of ideology-driven experiments through the course of the 20th century.  The latest one “will force out an important institution – the institution of family.”

Another member of the council, Deputy Chief Rabbi of Kiev David Milman, said fighting corruption and encouraging economic growth were better ways to  address the public interest than attacking the family. “If we destroy the foundation on which the faith in God rests,” he said, “in what way do we differ from animals?”