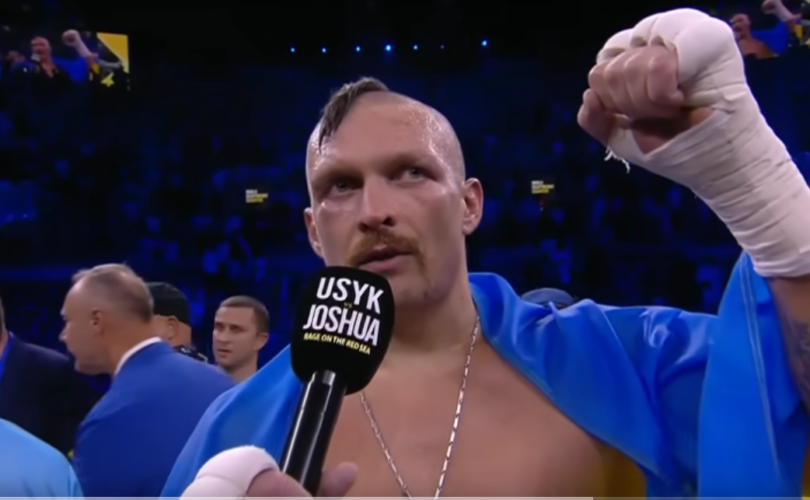 Usyk celebrating his victory over Anthony Joshua in Saudi ArabiaYouTube

“I want to thank everyone who prayed for me,” Usyk told a reporter while standing in the ring after his Saturday victory in Saudi Arabia.

“I want to thank God for the help he gave me today, because he did give me a lot today … My Lord is Jesus Christ,” the champion added while making the sign of the cross and donning a large crucifix around his neck.

At the end of the interview, asked if he had a final message to give to his fans and his fellow countrymen, Usyk replied, “Thanks, Lord, for everything.”

This is not the first time Usyk, who is an Orthodox Christian, has proudly proclaimed his faith.

Last year, after beating Joshua for the first time, Usyk likewise said that his only goal in the ring was “to give praise to my Lord Jesus Christ, and to say that all comes from him.”

Making strong declarations of faith in Christ has become somewhat of a trend in boxing, with undefeated heavyweight champion Tyson Fury also routinely invoking the name of Jesus during victory speeches and interviews.

“First of all, I want to say, as always, I dedicate this to my Lord and Savior Jesus Christ,” Fury, 33, told reporters after his heavyweight bout victory over Dillian Whyte in April.

“He gave me the victory again tonight, and I give Him the glory,” the boxing champ continued. “In the mighty name of Jesus Christ, I won this fight in this country tonight, in my lovely, my own, my England.”

Fury and Usyk have become fan favorites for both their boxing prowess and their willingness to invoke the name of Christ.

With Fury having struggled with severe mental health and addiction issues, and Usyk being from the politically-troubled nation of Ukraine, fans often cite their stories as inspirational, with both having risen to superstar status in their home countries.