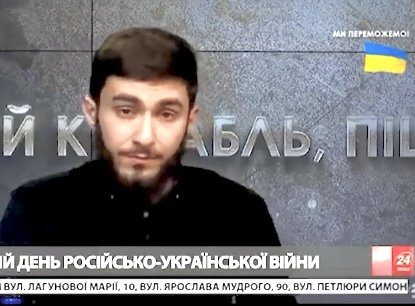 (LifeSiteNews) – UPDATE: According to online magazine The Bulwark, the Ukrainian television host in the story below made his remarks after discussing the death in battle of his friend, marine company commander Pavel Sbitov, and bursting into tears. The host, Fahruddin Sharafmal, who is of Afghani origin, apologized the next day, saying that his remarks were “unacceptable from both a journalistic and a human standpoint.” The general director of the company that owns Channel 24, Roman Andreiko, also issued an apology.  One video of Sharafmal’s outburst that is making the rounds of social media shows a photograph of Adolf Eichmann. This photograph was not part of the Channel 24 broadcast.

Ukrainian TV host Fahruddin Sharafmal said on air that Russian children should be killed and he would do it if necessary.

fakhrudin sharafmal on ukrainian channel 24 quoting adolf eichmann & calling for the killing of russian children, translation in next tweet pic.twitter.com/WbPQYRpm9g

He talked about killing Russian children during a portion of a show on the Channel 24 station.

“I know that as a journalist, I have to be objective,” he said. “I have to be balanced in order to report information to you with a cold heart, but to tell you the truth, it’s very hard to hold on now, especially at a time like this.”

He went on to reference the claim that Ukrainians had been called Nazis by some Russians: “[S]ince we are called Nazis, fascists, and so on in Russia — I will allow myself to quote Adolf Eichmann, who said that in order to destroy a nation, you must destroy, first of all, children. Because if you kill their parents, the children will grow up and take revenge. By killing children — they will never grow up and the nation will disappear.”

Eichmann was a German-Austrian SS-Obersturmbannführer and a major organizer of the Holocaust.

Sharafmal went on to say that he would kill Russian children himself.

He added that he would help “slaughter all [Russian] families” if needed.

“Glory to the nation! And hope that there will never be such a nation as Russia and the Russians on this earth again. Because they are just scum who are destroying this land. If the Ukrainians have the opportunity, which they are basically doing right now, to destroy, to slaughter, to kill, to strangle the Muscovites.”

The version of the clip uploaded to YouTube by Channel 24 was clipped and does not include the murderous rant.

Many questioned the authenticity of this pro-genocide Ukrainian TV broadcast.

You can see that they end the clip right before the host goes on his rant quoting Nazi mass murderer Adolf Eichmann.https://t.co/i2hJfdYKGv https://t.co/zwekUuYcth