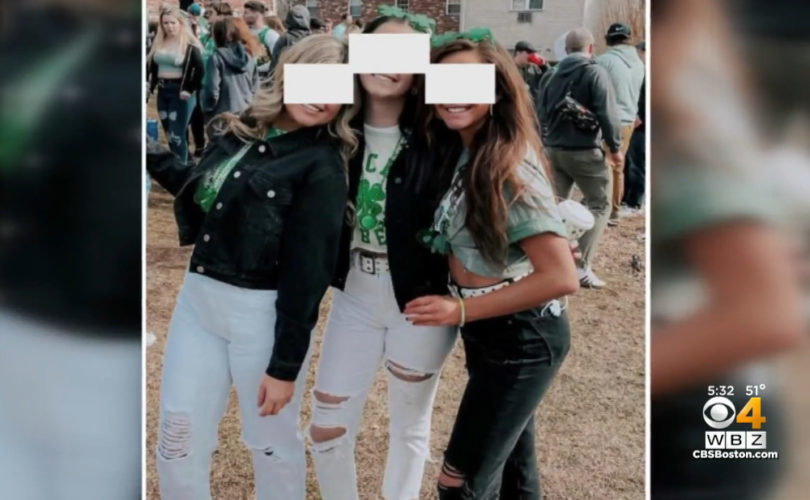 AMHERST, Massachusetts, May 14, 2021 (LifeSiteNews) — The University of Massachusetts Amherst has suspended three students over a maskless photo taken at an off-campus gathering, local news reports.

CBS Boston said that the women were flagged after another student sent the university a picture of them not wearing masks at a party in March. UMass kicked the students out of campus housing and made them attend class virtually while the school reviewed the case. The students’ appeals ultimately were denied, barring them from finishing the semester and costing them $16,000 of non-refundable tuition.

“That negates this whole semester, $16,000 of money, and they have to reapply for next semester,” a parent of one of the suspended students told CBS Boston. “There was a photo sent to the administration of these girls outside, off campus, on a Saturday. This is why they lost a whole semester of their schooling,” another parent reacted.

“Students received a number of public health messages this semester that emphasized the importance of following public health protocols and the consequences for not complying,” the university said in a statement. UMass’s draconian coronavirus restrictions have included mandatory bi-weekly testing in order to eat at the dining commons, and compulsory vaccination to attend the upcoming fall semester.

The families of the three suspended students reportedly have hired an attorney and will be filing a lawsuit over the penalties.

UMass suspended at least 10 students just for parties during the March 6-7 weekend, when the school ramped up its COVID measures. The three women were the only ones booted simply for not wearing a mask.

Parents also have noted that some members of the UMass Amherst hockey team and other students appeared to celebrate their national championship win without masks in a video last month. The university has claimed that the students involved in the “regrettable” incident were not penalized as virus cases were “much lower” and some restrictions had been lifted.

“I just want the university administration to be equitable and fair,” one of the suspended students’ parents said.