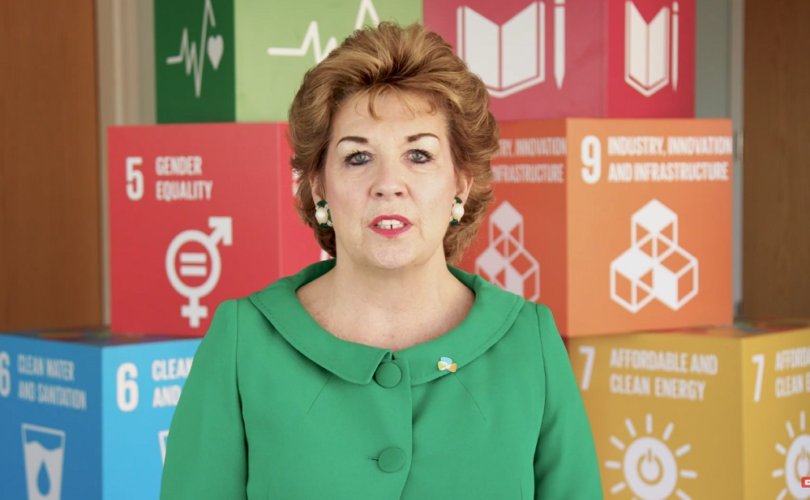 March 27, 2019 (C-Fam) — The most controversial U.N. negotiation of the year ended Friday afternoon in a bitter row between Saudi Arabia, Bahrain and the Irish chair of the Commission on the Status of Women over the procedure used to adopt an agreement on social protections for women.

“We urge and demand to receive a proper explanation from the chair,” said the delegate of Bahrain, Mohamed Al-Faris, adding that “you just banged your gavel and adopted the document.”

Ambassador Koki Muli Grignon of Kenya, who led negotiations in recent weeks, presented the agreement for adoption even though Saudi Arabia and Bahrain had not, in fact, agreed to the document. The Irish ambassador, Geraldine Byrne Nason, asked for the adoption of the agreement over their stated objections. After a brief pause, she pounded the gavel and declared the agreement adopted.

As in other years, the disagreement among states involved abortion and homosexuality, and other controversial topics. It is not uncommon in these situations for the chair of the commission resort to what many delegations consider underhanded tactics to force an agreement.

The Saudi and Bahraini delegations stormed out of the meeting following the procedural kerfuffle. Al-Faris told the Friday Fax both delegations plan to follow-up and make formal complaints to the Commission on the Status of Women and the Economic and Social Council.

The procedural maneuver by the Irish chair of the commission caught all delegations off guard, including Saudi Arabia and Bahrain. Other delegations expressed their confusion and surprise that Nason asked for adoption once the objections of Bahrain and Saudi Arabia were made known. The very nature of the agreed conclusions is that they are meant to be consensual.

“What happened during today’s process?” asked the delegate from Comoros.

The answer of the secretariat and the Irish ambassador was that there had been no objection to adoption. Procedurally, she may have prevailed, but the chair looked worried and uneasy throughout the rest of the meeting.

The row over the adoption of the agreed conclusions also sparked a debate about the use of threats and pressure to force delegates to accept UN agreements.

Koki Muli, who was in charge of the negotiations, emotionally said she had been bullied and harassed and that she feared for her life during negotiations.

“I wasn’t accosted by anyone. But I felt pushed around by people,” she said.

A delegate who was in the closed negotiations told the Friday Fax that Koki Muli suggested it was pro-life groups who opposed “sexual and reproductive health” and “comprehensive sexuality education” who harassed her.

Many delegations expressed their sympathy for Koki Muli, including delegations that take pro-life positions, but they also complained about how donor governments threaten and bully delegates in New York when they don’t accept abortion-related terms, LGBT issues, and attempts to redefine the family in UN agreements.

“Many delegates during this and past negotiations were victims of harassment and intimidation. They were threatened and their capitals were called. This practice is a disgrace!” exclaimed powerfully Monseigneur Tomasz Grysa of the Holy See.

“People should not suffer because they are doing their job,” he added.

The delegate of Bahrain said he had been “bullied and harassed by high UN officials” and threatened to his capital, the royal family. He asked for a “formal apology.”

The Saudi and Bahraini delegations complained about language in the agreement on sexual and reproductive health as a vehicle to promote abortion, the absence of any mention of the family “as the natural and fundamental group unit of society” in line with international law, and the failure to include any language about the importance of sovereignty. They protested that Koki Muli did not respect their requests and waited until the very end of the negotiations to discuss controversial items.

They were not alone in expressing a lack of consensus on abortion-related language, the inadequate attention to the family, and the flawed negotiations and adoption process.