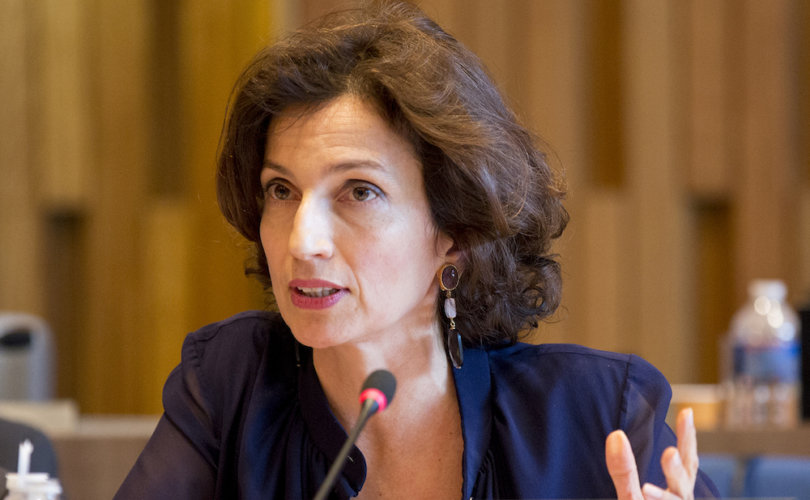 October 18, 2017 (LifeSiteNews) — The new director-general of the United Nations cultural organization UNESCO is a promoter of gender equality and was instrumental in changing the French film rating system to prevent sexually explicit and extremely violent films from behind automatically rated for “adults only.”

After five rounds of voting by its executive board, Audrey Azoulay, a former minister for culture under socialist president François Hollande of France, was elected ahead of Qatar’s Hamad bin Abdulaziz al-Kawari, who was considered the favorite. Azoulay is awaiting formal approval from UNESCO’s 195 members next month.

Azoulay’s campaign had the full support of French President Emmanuel Macron. As the head of the United Nations Educational, Scientific and Cultural Organization, Azoulay will have direct influence over education throughout the world.

Azoulay, 45, was born in Paris to a Jewish family of Moroccan origins. Her father, André Azoulay, a journalist and banker, was called to be counselor to the kings of Morocco since 1991, serving Hassan II and Mohammed VI in this Islamic country where Jews have lived for many centuries. André Azoulay is known to support a sovereign Palestinian state and he is also very active in interreligious circles, including the Alliance of Civilizations for cultural dialogue, “inclusive” societies and “diversity” established in 2005 as a political initiative of Kofi Annan, former UN Secretary General and co-sponsored by the governments of Spain and Turkey.

While Azoulay does not necessarily share all of her father’s opinions, she has gone out of her way to state that she grew up “in a very leftist family” whose profile would be perfectly suited to UNESCO’s primary concerns: defusing conflict in the world by promoting understanding between peoples to the detriment of traditional beliefs. In this context, religion has long been considered to be a force for conflict that needs to be reined in through the promotion of mutual tolerance and understanding that would prevent dogma and moral rules from hindering the implementation of its global agenda.

Azoulay studied management and political science before joining the prestigious “Ecole nationale de l’administration” or ENA, a breeding ground for top civil servants and political personnel where many of France’s leading politicians were formatted according to the rules and norms of the secularist government system.

Among her various jobs through the years, she especially enjoyed working at the “Centre national du cinéma,” a public organism that helps and subsidizes French film productions. A special commission of the CNC also provides ratings for films to be shown in French theaters.

In 2014, Azoulay joined the socialist government as minister for culture. She took over a case opened under her predecessor involving a number of sexually explicit or violent films that had lost their screening certificate for minors after a series of successful judicial complaints filed by the mainly Catholic pro-family organization “Promouvoir”. The restricted rating rhymed with a loss of money and theater venues, and a number of directors lobbied the ministry of culture in order to obtain a more lenient approach.

At the time, any film with scenes showing “non-simulated sex” or “extreme violence” were to be automatically rated as “pornographic” or at least restricted to 18+ audiences. This was often not the case in practice. The film Blue is the Warmest Color — recounting a love affair between an adolescent girl and a young woman artist, complete with the frequent and raw depiction of lesbian and heterosexual relations, for instance — was rated 12+ (yes, 12+, that is, open to very young adolescents). “Promouvoir” obtained the annulment of the screening certificate of the multiple award-winning picture; the certificate was to be restored one year later at the end of 2014. The Council of State, France’s highest administrative court, based its decision on the allegation that the actresses had been wearing extremely realistic prosthetic genitals.

Among other films taken to court by “Promouvoir,” the French film Love by Gaspar Noé includes an endless series of graphic sex scenes that leave absolutely nothing to imagination. It was first authorized for viewers age 16 and over before the administrative judges decided to restrict it to adult audiences.

These and other similar cases triggered protests from the film community in France and it was soon decided by the government that official texts compelling the CNC to give 18+ ratings to films with non-simulated sex scenes be modified in order to avoid this type of “censorship.” Measures would also be taken so that the delivery of a screening certificate would be “safer” for producers in order to reduce the risk of a film being stripped of its “visa” for a period of some length.

Azoulay heartily agreed. She personally made clear that she would find ways to “simplify” and hasten the process. It was under her term that a new decree came into force in February of this year, scrapping the obligation. It was replaced by a new, relaxed rule that films including “sex scenes or extremely violent scenes that are likely, in particular due to their accumulation, to disturb the sensitivity of minors, to present violence in a favorable way or to trivialize it.” This leaves enough elbow room for the CNC to argue that a scene is not “disturbing” – at any rate, the French cinema industry was content. In practice, almost everything can now be shown to young adolescents without fearing an 18+ rating.

This is the woman who will rule over world culture and recommend education standards everywhere – apart from the United States, in particular, which left UNESCO just before Azoulay was chosen by the organization’s executive committee.

Perhaps not surprisingly, Azoulay has told the world that Simone Veil, who authored the French law legalizing abortion in 1974, is her personal and political role model. During her office as a socialist minister, Azoulay was also particularly active in promoting “sexual equality” and tracking down “stereotypes.”