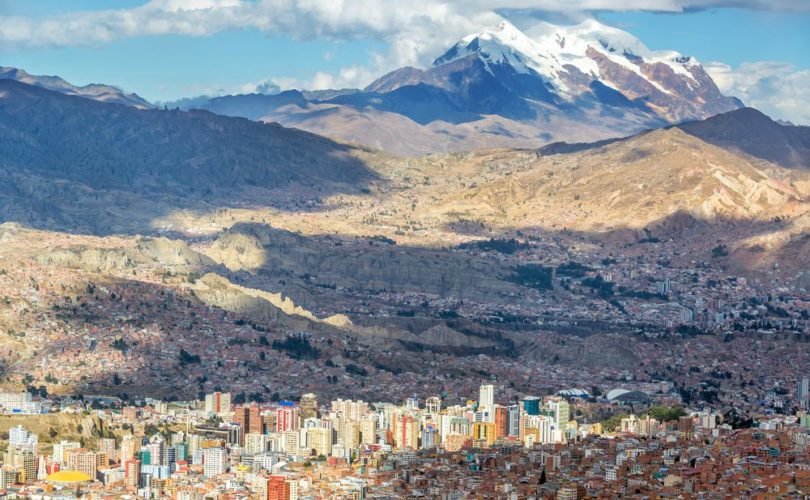 Cityscape of La Paz, Bolivia with Illimani Mountain rising in the background.Shutterstock.com

LA PAZ, Bolivia, August 4, 2015 (LifeSiteNews) – The United Nations Committee on the Elimination of Discrimination Against Women (CEDAW) has recently recommended that Bolivia “decriminalize abortion in all cases and … ensure effective access to safe, legal abortion at least in cases where women’s lives or health are at risk; where fetal impairment prevents independent life outside the womb; and in cases where the pregnancy is the result of rape.”

In declarations to local media, Archbishop Jesus Juarez from Sucre said he considered the UN’s recommendation an “intromission.” “Our country demands sovereignty on these issues,” he said, and explained that in the Church’s position, abortion “will always be something that goes against life […] a human being is sacred and inviolable in every situation and in every stage of its development.”

Last month, Amnesty International presented a briefing on Bolivia to the CEDAW in regards to the country’s legislation on abortion and “sexual and reproductive rights.”

The report stated that “access to safe, legal abortion in cases of rape must be a priority” in Bolivia, as “most teenagers begin their sex lives with unwanted sexual activity.”

As many cases have shown, allowing for abortion in cases of rape only perpetrates the rapists’ behavior, with abortion being the most effective way to hide the criminal’s tracks.

The country currently exempts abortion from penalties only in cases of rape, incest, and danger to the life of the mother, and requires previous government permission if an exemption is to be applied.

The document expressed “concern about the fact that prior court authorization is needed in order for therapeutic abortions” and went on to say that even the UN’s Committee against Torture frowned upon said legislation in 2013.

A study, carried out by the Women’s Coordinator (Coordinadora de la Mujer), a private network of feminist groups, found that 79 percent of Bolivians reject the possibility of carrying out an abortion personally, and only two percent wished to allow abortion as a free decision of women.

Even in cases of rape, only 29 percent believed that abortion should be permitted, as it currently is in Bolivia.

The report by Amnesty International begins by saying the organization works for “every person to enjoy all the rights enshrined in the Universal Declaration of Human Rights and other international human rights standards.”

The Declaration however, states that “Everyone has the right to life, liberty and security of person,” in its third article.