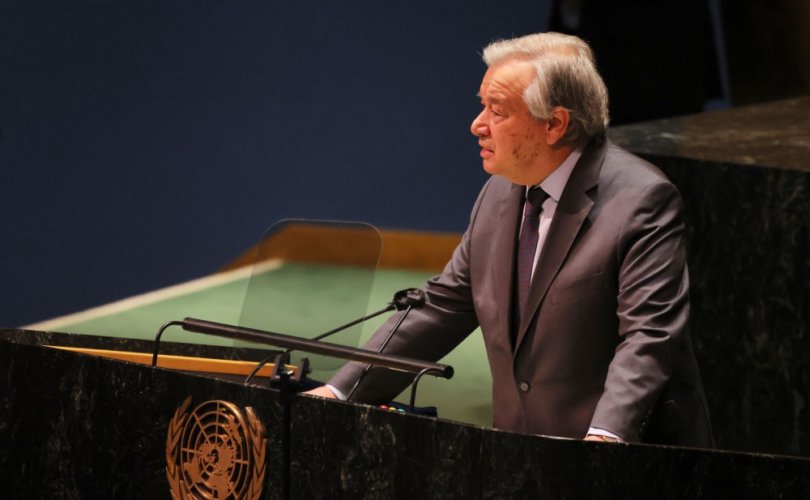 NEW YORK (LifeSiteNews) — The secretary general of the United Nations issued a stark warning to the world on Monday, suggesting that nuclear war was once again “within the realm of possibility” amid the Russian invasion of Ukraine.

“The prospect of nuclear conflict, once unthinkable, is now back within the realm of possibility,” said U.N. Secretary-General António Guterres while addressing media members in New York on March 14.

Guterres, who said he has reached out to several countries including China, France, Germany, and Israel in attempts to mediate the conflict between Russia and Ukraine, added that “[t]he appeals for peace must be heard,” and suggested “It’s never too late for diplomacy and dialogue.”

.@UN Secretary-General @antonioguterres: “Raising the alert of Russian nuclear forces is a bone-chilling development. The prospect of nuclear conflict, once unthinkable, is now back within the realm of possibility.” pic.twitter.com/pwFhTPH11f

As the war in Ukraine approaches its fourth week and western nations have imposed a bevy of economic sanctions on Russia in response to the conflict, analysts have expressed concern that the Russian military could resort to nuclear warfare if President Putin feels “backed into a corner.”

The potential for a catastrophic nuclear war has led many U.S. commentators and politicians on both sides of the political aisle to urge caution in response to calls from media pundits and others to engage more directly in the conflict, warning that involvement by members of the North Atlantic Treaty Organization (NATO) would trigger a third world war.

With the possibility of a disastrous global conflict on the horizon, the violence in Ukraine has led religious leaders around the world to beseech believers to pray for peace in the region and throughout the world.

On March 15 amid the ongoing fighting, Pope Francis surprised many by announcing he will consecrate Russia and Ukraine to the Immaculate Heart of Mary after an appeal made by the Ukrainian Catholic bishops.