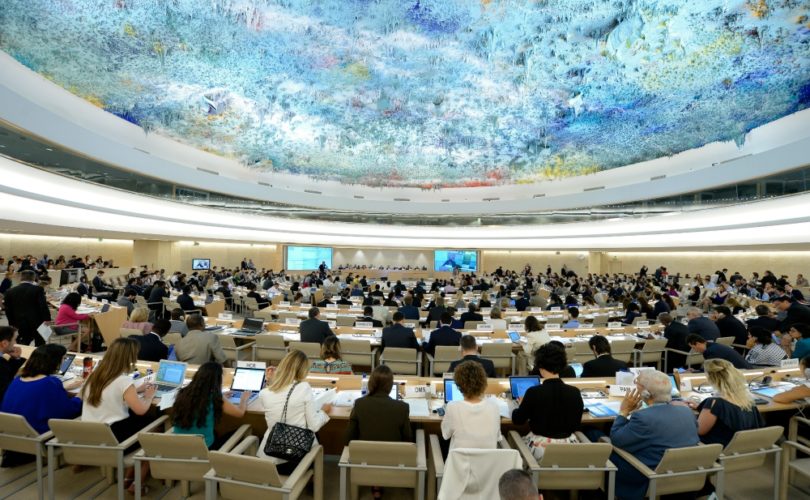 GENEVA, July 15, 2015 (LifeSiteNews) – A United Nations civil and political rights treaty declaring that “every human being has the inherent right to life” was on the table yesterday in Geneva for the purpose of discussing a possible interpretation that would allow signatory countries to make exceptions for abortion, euthanasia, and suicide. The 1960s treaty, affirmed by 74 countries and 168 parties, was created in direct response to Nazi Germany atrocities.

A UN Human Rights Committee allowed various ‘rights’ organizations and academia a half day of general discussion during a meeting on Article 6 (right to life) of the International Covenant on Civil and Political Rights (ICCPR). The Committee says that position papers submitted as well as the general discussion will be used to make what it calls a “general comment” on the article that signatory countries will be expected to follow.

Pro-life organizations worldwide have interpreted the move as a not-so-veiled attempt by UN social engineers to establish in a UN treaty categories of the killable that include the pre-born, the sick, and the vulnerable.

“It appears that General Comment No. 36 proposes to introduce an amendment to Article 6: Right to Life by introducing two new exceptions (abortion and euthanasia) to States Parties’ obligation to uphold the right to life,” a submission to the Committee by the natural fertility regulation organization WOOMB International stated.

Over 110 groups, many of them either pro-life or pro-death, submitted written contributions to the Committee for the discussion, each arguing their own point of view.

International Planned Parenthood Federation stated in its submission that the “right to life begins at birth.” The abortion giant called the issue of at what point life begins a “deeply personal and individual determination,” adding that countries that adhere to the ICCPR treaty “should not opine on philosophical issues such as when life begins or legislatively impose it upon their citizens, who must each decide this according to their faith and beliefs.”

This line of thinking was also followed by Amnesty International which argued that applying right to life “prenatally” would “inevitably lead to conflicts between a pregnant woman or girl and her foetus.” The group recommended that the Committee affirms that abortion “should not be listed as a possible exception to the duty to protect life by law.”

But pro-life organizations such as Priests for Life submitted that the right to life is the “foundation of human rights and extends to all members of the human family from conception to natural death,” adding that “no one ought to arbitrarily lose their right to life.”

“The right to life is the most fundamental right, since no other rights can be exercised if one does not exist,” it stated.

In a spoken statement made to the Committee at yesterday’s meeting, Patrick Buckley from the U.K.’s Society for the Protection of Unborn Children (SPUC) asked the Committee to “do the right thing” and reaffirm the universal language of Article 6 as applying to all human beings, both born and unborn.

“The basic question is, will the Committee do the right thing and use this opportunity to protect the right to life of the most vulnerable human beings? Or, on the other hand, will the Committee bow to the ongoing demands of the abortion lobby and attempt to establish a right to kill the unborn rather than logically interpreting the International Bill of Rights and specifically the ICCPR in accordance with its provisions and in accordance with the provisions of the Vienna Convention?” he said.

Numerous pro-life organizations based their submissions to the Committee on science and existing UN jurisprudence.

“It is simply a scientific fact that from the moment of conception the unborn child is a distinct human being with her own DNA, separate from that of her mother and father (albeit that she is living within her mother’s body). There is no basis in the [ICCPR] Covenant for denying the protection of Article 6 to an unborn child merely on the basis that she is at an early stage of development or has not yet been born,” submitted the U.K. organization Right To Life.

The human rights organization Pro Life Campaign of Ireland argued that article 6 on the right to life must “broadly” be interpreted as including the pre-born since the same article prohibits the death penalty for pregnant women, an implicit recognition of the right to life of the pre-born.

“As the travaux préparatoires of the ICCPR explicitly state, ‘The principal reason for providing in paragraph 4 [now Article 6(5)] of the original text that the death sentence should not be carried out on pregnant women was to save the life of an innocent unborn child,’” the organization noted.

Buckley told LifeSiteNews that even though the pro-life movement was well represented at the Committee meeting and made excellent statements, he nevertheless had the perception that the interventions were not well received.

“An example of what I am saying occurred when Denise Mountenay of Canada Silent No More gave a very personal and deeply emotional sharing on the effects of so-called ‘safe’ legal abortion in her life. When the section of the proceedings came to an end, one of the Committee members sought to contradict her testimony by asking two of the most pro-abortion organizations, the Centre for Reproductive Rights and IPAS, to comment,” he said.

Buckley told LifeSiteNews how the Committee appears to have allowed the proceedings to be weighed in favor of the pro-abortion lobby. He said that SPUC brought to the Committee’s attention a number of concerning irregularities that occurred leading up to yesterday’s discussion and at the meeting itself. In a letter to the Committee SPUC noted how organizations holding a viewpoint favoring the right to life of the unborn were allotted 2 minutes each to make a statement at the Committee meeting, whereas groups and organizations favoring abortion were granted additional time.

“Are all the humans/NGOs equal but ‘some more equal than others’?” SPUC asked the Committee in a formal letter of complaint.

SPUC asked the Committee to explain how extension of the deadline was granted to “some organizations holding a particular opinion” without any public notification that such an extension had been granted. An explanation has not yet been provided.

Following yesterday’s discussion, the Committee will produce a draft of the “general comment.” A “first reading” will follow in a closed session. The text resulting from the “first reading” will then be made public on the Human Rights Committee’s webpage for comments by interested parties. A “second reading” will then follow, whereupon signatory countries and parties who have ratified the treaty will be expected to follow the Committee’s interpretation of the right to life article as “appropriate and authoritative.”