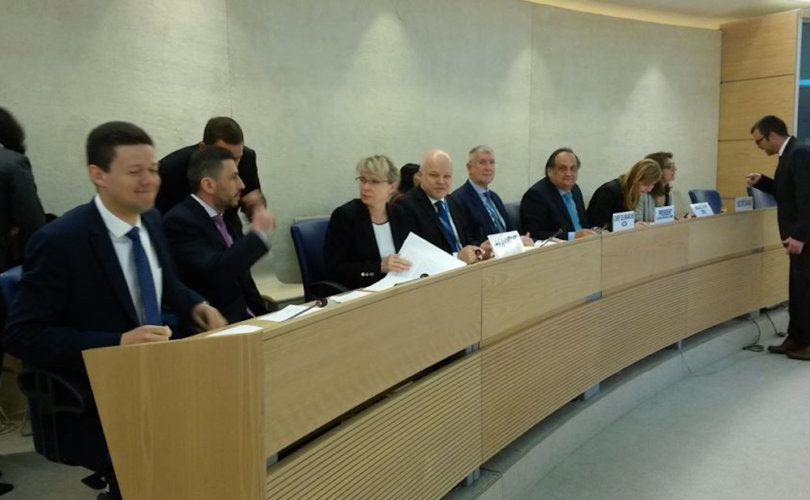 GENEVA, Switzerland, May 11, 2017 (LifeSiteNews) – A United Nations organization assailed Poland this week for its pro-life laws.

Several western nations told the mostly Roman Catholic and predominantly pro-life country to give women the right to safe and legal abortions, according to news coverage of the meeting.

Poland’s representatives also heard criticism from numerous western countries about new laws thought to be limiting independence of the judiciary and public media, as well as a reported increasingly xenophobic atmosphere leading to crimes against foreigners.

The debate took place Tuesday in Geneva during a session of the Human Rights Council.

The Council is an intergovernmental body within the UN composed of 47 member nation states elected by the UN General Assembly to be responsible for the promotion and protection of human rights around the globe. The Council periodically reviews all UN members.

The session was the first review of Poland in five years, and also the first since the 2015 election of the country’s conservative Law and Justice party, which is facing accusations of violating the rule of law from the European Union (EU).

“We are also concerned about the continued discrimination and incidents targeting minorities in Poland,” Leonard said,” including homophobic, xenophobic, and anti-Semitic speech and acts.”

Turkey’s delegate voiced concern about an anti-Muslim attitude in Poland, and the Russian delegate condemned a recent wave of vandalism on memorials for a Soviet soldier who died in World War II.

Polish officials defended their record and said the changes the Law and Justice party initiated were in accord with European norms.

Several delegates acknowledged the drop in childhood poverty and pushed for Warsaw to demonstrate improvement in the other areas.

Abortion is illegal in Poland with the exceptions of rape and incest, risk to the mother’s life, or when the unborn child is irreparably ill. It had previously been legal for decades when the country was under Communist rule.

More recent attempts to ban abortion entirely have fallen short. Feminists took to the streets throughout the country last fall to protest the proposed ban.

In 2015, a document produced by UN Committee on the Rights of the Child called on Poland to give children wider access to abortions, fight against “gender stereotypes,” and amend its penal code to allow for prosecution of “hate speech and other hate crimes motivated by racism, xenophobia and homophobia.”