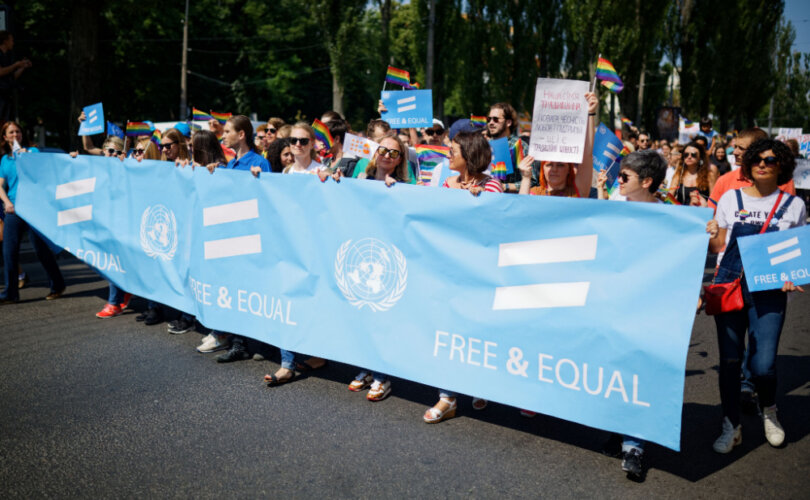 Updated to include UN response.

(LifeSiteNews) — The United Nations (UN) is considering the adoption of a treaty that would defend homosexual lifestyles and may lead to the addition of so-called “homophobia” to the classification of a crime against humanity.

A document titled “Draft Articles on Prevention and Punishment of Crimes Against Humanity” is the unofficial treaty that has removed a long-accepted definition of gender as male and female, leaving open the possibility of defending the truth about gender and sex to qualify as a crime against humanity in the form of targeting LGBT people.

The draft treaty proposes changes that are both consistent with and in opposition to the 1999 Rome Statute, which established the International Criminal Court and includes persecution on the basis of gender as a crime against humanity. However, the statute also states that “the term ‘gender’ refers to the two sexes, male and female, within the context of society. The term ‘gender’ does not indicate any meaning different from the above.”

Contrary to the long-accepted treaty, the draft under debate in the current session has removed this definition of gender and emphasized the broad classification of a crime against humanity as a means to include LGBT people as populations to be protected.

“For the purpose of the present draft articles, ‘crime against humanity’ means any of the following acts when committed as part of a widespread or systematic attack directed against any civilian population,” the document states. Specified crimes fall under various categories, including sexual violence, enslavement, and discrimination.

“Those targeted may ‘include a group defined by its (perceived) political affiliation’,” the draft added.

According to the Center for Family and Human Rights, or C-Fam, the European Union and the United States are “pushing the General Assembly to adopt the new treaty” while other countries, including Morocco, many nations in the African Group, Egypt, the Russian Federation and Pakistan rejected the proposal. The Holy See also criticized the treaty, stating that it “regrets the ILC’s (International Law Commission) decision” to remove the true definition of gender from the draft.

The draft treaty, which was originally published in 2019, is currently under debate in the UN General Assembly. A decision about whether the treaty will move forward is expected by the end of November.

The Human Rights Office of the High Commissioner (OHCHR), a branch of the UN that provides research and advice regarding human rights issues within countries, previously released a letter that expressed concern about the “outdated” definition of gender used in the Rome Statute and requesting that the definition be removed.

“In order for such a text [the crimes against humanity treaty] to be constructive it must reflect current definitions for terms used to describe human rights protections and abuses under international law, including for the definition of gender,” the letter states.

“We therefore urge the International Law Commission to either remove the definition of gender … of the draft crimes against humanity convention (since no other persecutory category comes with a definition) or to insist on the social construction of gender as it is widely recognized to be.”

LifeSiteNews has contacted the OHCHR for verification about when the letter was written. The Office responded as follows:

We were able to confirm with colleagues who work with the Special Rapporteur on Summary Executions that the document you referenced was submitted to the International Law Commission on 30 November 2018. The document was made public on the same day.

It appears that the letter was subsequently included as part of the submissions to the International Law Commission at its seventy-first session held from 29 April to 7 June and from 8 July to 9 August 2019 in Geneva.

Prior to the current push to surrender to the LGBT agenda, the UN has also been pressured to declare abortion a “right” for every woman within human rights laws. This effort was particularly supported by the Biden administration and the European Union after the overturning of Roe v. Wade in June.

However, some pro-life nations within the UN publicly rejected its declaration that abortion is a “human right,” including Uganda and other African countries.

Don’t forget the UN, European Union are aggressively promoting abortion around the world