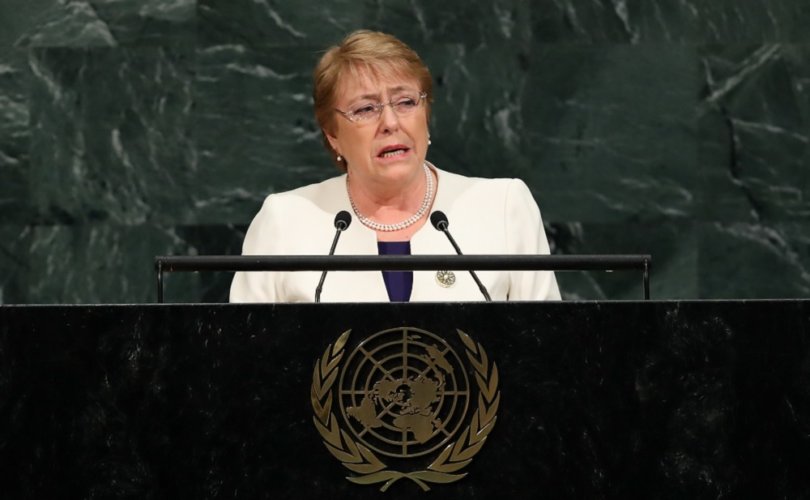 NEW YORK, May 29, 2020 (C-Fam) — The head of the UN human rights office praised the Supreme Court of Costa Rica for judicially imposing homosexual marriage, then claimed credit for the court’s activism in a video message this week.

“I welcome the legalization of equal civil marriage in Costa Rica. We are all born free and equal and have the right to live without discrimination on any grounds,” UN High Commissioner for Human Rights Michelle Bachelet tweeted on May 26 in a congratulatory video message.

Costa Rica’s laws limiting marriage exclusively to a man and woman were judicially struck down on May 26, 2020 to allow homosexual marriage following a contested 2018 Supreme Court ruling. In the ruling, the court ordered Costa Rica’s legislature to amend the country’s marriage and family law to allow homosexual marriage by the designated date, or the laws would be automatically struck down.

Bachelet explained how the UN human rights office she leads, and the Inter-American Court of Human Rights, worked together to put pressure on Costa Rica’s Supreme Court.

“My office had the opportunity to collaborate with the Inter-American Court sharing the United Nations standards, that as in the case of Costa Rica, can guide the states of the region in advancing the human rights of LGBTI people,” Bachelet explained in the video.

Though UN agencies and the UN human rights system routinely maintain that LGBT rights are protected by international treaties, they are routinely contested by UN member states, who have yet to adopt a resolution which recognizes such protected status.

The Inter-American Court opinion for which Bachelet claimed credit purports to be binding on all 23 parties for the Inter-American Convention on Human Rights under a legal doctrine of “constitutionality control.” The Court effectively saw itself as ordering all countries in Central and South America to allow homosexual marriage, transgender laws, and government sanctioned artificial reproduction as flowing from the non-discrimination provision in the convention.

The European Court of Human Rights has been more cautious, refusing to impose homosexual marriage as the Inter-American Court and U.S. Supreme Court have done.

The country’s governing body for notaries reacted to the 2018 decision with an order to take away the license of any notary who recorded homosexual marriages. That order was declared null by the Supreme Court earlier this year.

The president of the court, Fernando Castillo Viquez — a highly respected jurist who was elected by Costa Rica’s legislature to a second eight-year term on the court — dissented. He issued a separate opinion, saying he did not agree that the Supreme Court could strike down Costa Rica’s marriage laws based on a ruling of the Inter-American Court. He also argued that both Costa Rica’s laws and International Law protect the natural family.