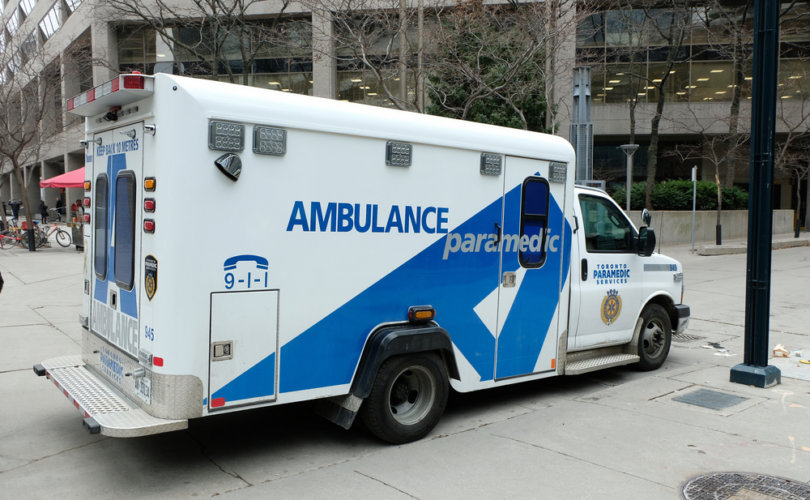 TORONTO (LifeSiteNews) — A Toronto paramedic on unpaid leave for refusing the COVID shots after witnessing firsthand their negative effects said her city faces a critical ambulance shortage as a result of a municipal vaccine mandate.

According to a True North News report, un-jabbed paramedic Scarlett Martyn, who is a mother of four (and who in the past was awarded an Exemplary Service Medal for her work), warned that the city of Toronto is “brutally short staffed” to the point where there are “zero ambulances in the city.”

“The last weekend I worked, there were times, it was night shift over the weekend, when several locations had no ambulances to send,” said Martyn. “Response times are through the roof. It’s bad, it will have a huge impact on survivability and lives lost.”

Martyn could be facing permanent job loss, which would also strip her of any severance pay, according to the True North News report.

She said that mandating the COVID jabs for city workers was a mistake and a “bigger risk” to public health than the virus.

While the province of Ontario has not issued a blanket COVID shot mandate for healthcare workers, the City of Toronto mandated the jabs for all its staff. This requirement has been in place since September 17.

Martyn said that the unvaccinated workers are not putting “anybody at risk.”

“If our PPE that we’ve been wearing for 20 months and through other pandemics with no vaccine — we’ve worked through SARS, the Avian Flu — I think our PPE works,” said Martyn.

Canada’s Prime Minister Justin Trudeau has mandated COVID-19 jabs for all federal public service workers. His government has also said that those without the jabs, after November 30, will no longer be able to travel by air, sea or train.

From November 15 on the Canadian government has mandated that all public servants “who refuse to disclose their status or who are unwilling to be fully vaccinated will be placed on administrative leave without pay.”

‘I’ve seen a rare type of stroke immediately after vaccination’

Martyn said her decision not to take the experimental COVID jabs was due to witnessing first hand their negative health effects.

“I’ve seen a rare type of stroke immediately after vaccination and the family said ‘he was fine before this,’” said Martyn, as reported by True North News.

Martyn added that she also saw “cases of heart inflammation.”

“I don’t know further if they’ve been diagnosed as related to the vaccine but we know that it is an adverse reaction when we are picking them up after people are vaccinated,” she said.

Martyn had asked her employer for alternatives to getting the jabs, such as testing, but was told to just get “vaccinated.”

“My suspension letter had me as insubordinate, willfully disobeying workplace health and safety, failing to get fully vaccinated,” said Martyn. “The whole process was humiliating. Here I was as a good employee, I wrote a letter, I did my due diligence. They gave a vaccine education course.”

Martyn said that she did take the course, but still came out of it with “questions and concerns.”

“I’m not being noncompliant,” said Martyn, adding that when she was asked to hand over keys to the ambulance’s narcotics medical cabinet, she felt she was being “treated like a criminal because I don’t want to take this vaccine.”

“I’m no longer trustworthy to have city ID or drug keys,” said Martyn.