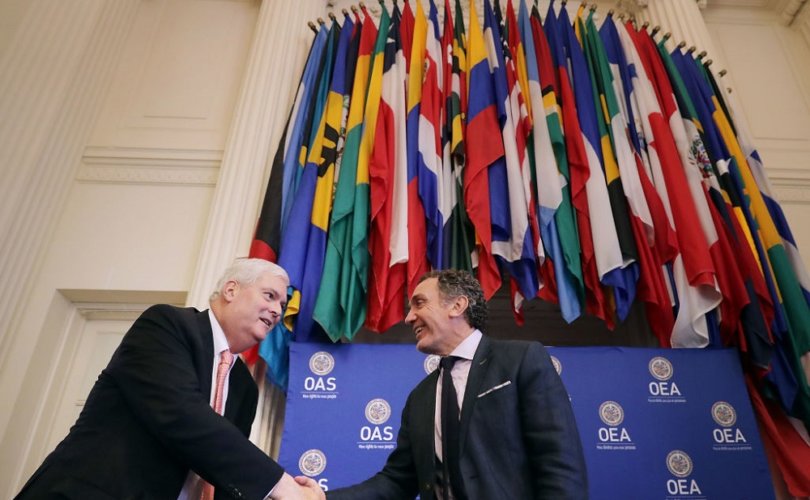 A news conference at the pro-abortion Organization of American States.Chip Somodevilla / Getty Images

NEW YORK, July 31, 2020 (C-Fam) — Funding for foreign aid cannot be used to lobby for or against abortion, according to U.S. law. There is growing interest among U.S. lawmakers in enforcing that standard against the UN and its various agencies.

Last year, the U.S. Department of State cited the Siljander Amendment when it cut funding to two organs of the Organization of American States (OAS) due to their pressuring Latin American countries to liberalize their abortion laws. Secretary of State Mike Pompeo announced the cuts in March 2019, saying, “our reduction equals the estimated U.S. share of possible OAS expenditures on these abortion-related activities.”

This came about through a 2018 letter from a group of U.S. Senators led by James Lankford to Secretary Pompeo outlining OAS abortion lobbying and asking him to enforce the Siljander Amendment.

However, the OAS and its human rights bodies are not alone in lobbying for abortion at the international level and that receive U.S. funding. Multiple UN agencies that receive U.S. funding are engaged in similar activities, and the actions taken by the State Department toward the OAS provide a blueprint for how similar steps could be taken to reprimand pro-abortion overreach at the UN.

There is no internationally agreed human right to abortion, nor a right to abortion in international humanitarian law, and the consensus among UN member countries is that abortion laws are a national matter. Nevertheless, the UN Secretariat, the Office for the High Commissioner for Human Rights (OHCHR), the World Health Organization (WHO), UN Women, the United Nations Population Fund (UNFPA) and other agencies operating under the UN umbrella routinely pressure countries to decriminalize abortion or legalize it under more circumstances.

The most aggressive pressure comes from the Office for the High Commissioner for Human Rights, which includes the independent expert bodies that monitor compliance with the nine core multilateral human rights treaties. All but one of these treaty bodies have directly pressured countries to change their abortion laws, two of which did so for the first time in 2019, despite none of the related treaties mentioning abortion at all. The treaty body monitoring compliance with the treaty on women’s rights (CEDAW) pressured nations in 88 percent of the country reviews it conducted in 2018.

The treaty bodies accounted for 14 percent of OHCHR’s budget in 2017, and the U.S. is among the leading contributors to its operations, giving over $18 million in 2018.

The Secretariat of the UN, led by the Secretary-General, has issued multiple reports characterizing abortion as a right in humanitarian settings, particularly in cases of conflict-related sexual violence.

Similarly, other UN agencies including UN Women, UNFPA, and the WHO, have issued manuals promoting abortion.

While the WHO and UNFPA have been defunded by President Trump as an executive action, a future Democratic administration could reverse those cuts. Nevertheless, as Secretary Pompeo pointed out, ensuring that U.S. contributions are not going to support abortion lobbying is a matter of federal law. Applying that standard to the UN, just as it was applied to the OAS, would be the next logical step.