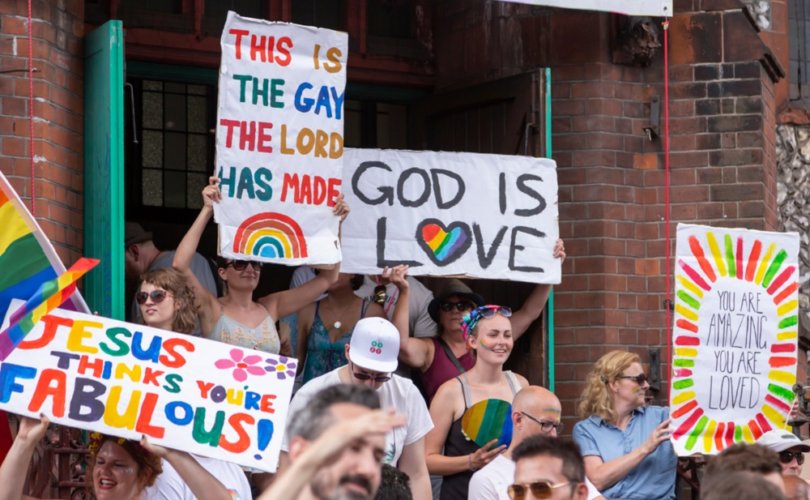 March 11, 2020 (LifeSiteNews) — A recently published U.N. report on freedom of religion argues that it is a vital part of respecting the rights of women and people who identify as LGBT that they are able to “belong to a faith of their choice without being discriminated against” for their “right” to abortion and LGBT practices.

The report goes on to claim that international law may recognize “the right of those persons to take part on an equal basis in the process of defining that community” — in other words, LGBT people and pro-abortion people may have the right under international law to redefine their faith community, whether it be Christian, Muslim, or Jewish.

The report, authored by Ahmad Shaheed, the U.N. special rapporteur on freedom of religion or belief, states:

For women and LGBT+ individuals, realizing religious freedom is often about realizing their agency and equality within religion. The Special Rapporteur submits that the ability of women, girls and sexual orientation and gender identity minorities to belong to a faith of their choice without being discriminated against, is vital to realizing their right to freedom of religion or belief, as well as their right to be free from gender discrimination.

International law protects the right of persons to exit a religious or belief community, but it may also recognize the right of those persons to take part on an equal basis in the process of defining that community.

In the context of the report, when Shaheed writes about women being able to exercise their rights free from “discrimination,” this includes women’s so-called “sexual and reproductive health rights,” which is a regular theme of U.N. reports and historically a euphemism for access to contraception and abortion.

The report calls for “transformational policies” in order to achieve “gender equality and full respect for the human rights of women, including sexual and reproductive health and rights.” These so-called “sexual and reproductive rights,” according to the report, are restricted by laws that institute “partial or total bans on access to abortion and contraception [and] prohibitions on assisted reproductive technologies and gender reassignment [sic] surgery” and that place limits on what Shaheed calls “evidence-based sexuality education.”

Shaheed calls on “States” — i.e., national governments — to “ensure that all individuals are able to effectively enjoy their human rights” and for governments to “combat gender-based violence and discrimination,” including where this occurs “on the basis of … religion or belief.”

According to the report, the obligation of states to “ensure gender equality” is not limited to the public realm but extends “into areas of religious life, where discriminatory practices impair the ability of women, girls and sexual or gender identity minorities to enjoy their human rights on an equal footing.”

While noting the “right to maintain the internal institutional affairs of religious community life without State intervention,” Shaheed then asserts that this may be restricted “in strict compliance with Article 18(3) of the ICCPR.” The ICCPR is the 1966 International Covenant on Civil and Political Rights, and article 18(3) says the freedom to manifest one's religion or beliefs may be subject to the fundamental rights and freedoms of others.

Several commentators have pointed out that the report stops short of ordering religions to change their doctrines. However, it is important to note what has been asserted: “women and LGBT+ individuals” must be able to belong to any religion of their choice, free from discrimination within that religion and to “enjoy their human rights [within religious communities] on an equal footing.” International law may recognize their rights to help define religious communities, and governments are obliged to go beyond the public realm and into “areas of religious life” to guarantee their rights.

The report also calls on states to “develop human rights education and training” for religious leaders.

The report’s purpose, as described in its summary, is addressing what it calls “gender-based violence and discrimination in the name of religion or belief.” It calls on states to repeal laws that “criminalize abortion in all cases” and argues that in a number of states, “worldwide religious precepts underlie laws and state-sanctioned practices that constitute violations of the right to non-discrimination of women, girls and lesbian, gay, bisexual and transgender (LGBT+) persons.”

The report makes no acknowledgment of the significance to world religions of authoritative texts along with teachings and traditions that contradict the U.N.’s understanding of human rights. Instead, Shaheed claims that religious communities are “not monolithic” and that “[a] multitude of voices exist within religious groups and institutions, including faith-based actors who campaign for the rights of women, girls and LGBT+ persons and work to promote gender equality within their faith.”

According to Shaheed, the existence of such individuals within religious communities shows that religions are not necessarily the source of what he calls “gender-based discrimination.” Rather, it is only “interpretations of those [religious] beliefs” that encourage “discrimination,” and Shaheed says such interpretations “are not protected, per se.”

In other words, a traditional religious teaching or belief that the U.N. considers “gender-based discrimination” may be regarded as merely a “religious interpretation” and not recognized under laws protecting religious freedom.

The report also describes as an “area of particular concern” national laws that protect the “conscientious objection by healthcare providers and institutions unwilling to perform abortions or provide access to contraception on religious grounds.”

And, in an attack on pro-family groups working to defend marriage, the report criticizes what it calls “religious interest groups” for having attempted in three states “to change the constitution to define 'the family' according to religiously grounded heterosexual norms.” Shaheed complained that such interest groups are also reportedly “misusing freedom of religion or belief to oppose self-determination rights for gender diverse persons.”

The Vatican’s permanent observer to the United Nations, Archbishop Ivan Jurkovič, has described the report as an “attack on freedom of religion or belief as well as freedom of conscience” and a “sort of ideological colonization.”

“Particularly unacceptable and offensive are the numerous references that recommend that freedom of religion or belief and conscientious objection must be surrendered for the promotion of other so-called ‘human rights,’ which certainly do not enjoy consensus, thus being a sort of ‘ideological colonization’ on the part of some States and international institutions,” the archbishop declared.

Jurkovič said the Vatican defines “gender” and related terms “according to the ordinary, generally accepted usage of the word ‘gender,’ based on the biological identity that is male and female.” However, Jurkovič did not directly address the report’s assertion that international law may recognize the right of individuals to “take part on an equal basis” in the process of defining religious communities.

“My delegation cannot but lament that the report seems to focus less on the protection of men and women, of any faith or personal belief, that are persecuted or discriminated against — a still too vivid reality for millions of persons worldwide — and more on pushing a vision of human society that is not shared by all and does not reflect the social, cultural and religious reality of many peoples,” he said.

Jurkovič said Pope Francis and others in the Vatican have noted the “growing influence within the international organizations of powers and interest groups that impose their own visions and ideas, sparking new forms of ideological colonization, often in disregard for the identity, dignity and sensitivities of peoples.”

“It is rather unfortunate, yet increasingly less surprising given its frequency, that a U.N. report, which should defend the fundamental and universal human right of freedom of religion or belief as well as the right to conscientious objection, is now attacking the very reality it is called to defend,” he said.

In an article re-published last week by LifeSite, C-Fam’s Rebecca Oas explains that while such reports are advisory and nonbinding, nevertheless, “they feed into the UN’s library of human rights documents that frequently cite each other in defending interpretations of human rights that are far from gaining widespread support among UN Member States.”