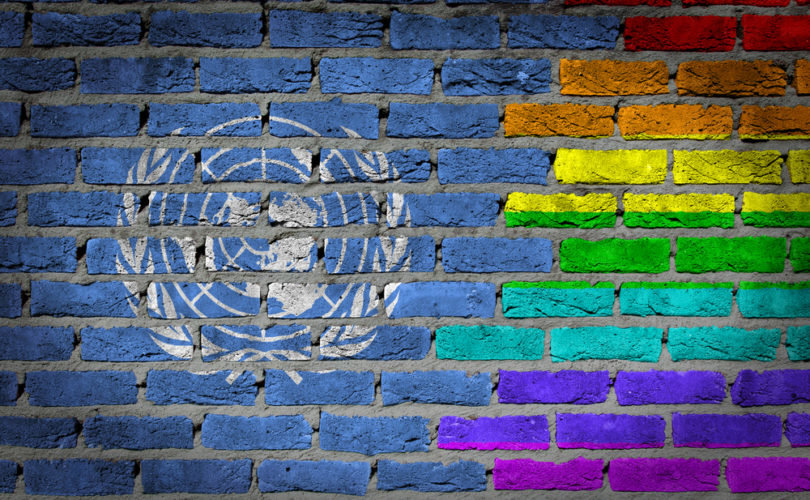 NEW YORK, June 11, 2015 (C-Fam) — A UN report seeking to break new ground for “LGBT rights” left same-sex “marriage” out of a long list of special new rights on the basis of sexual orientation and gender identity.

The UN human rights office published its latest collection of UN expert opinions about lesbian, gay, bisexual and transgender (LGBT) rights last week in Geneva. The update highlights the achievements of the LGBT lobby while playing down opposing trends.

UN agencies are “increasingly integrating issues of sexual orientation and gender identity into their programmatic work,” it states.

The report documents the fast pace of the LGBT lobby within the United Nations bureaucracy. Thirty new staff posts throughout UN agencies are designated as “focal points” for “LGBT rights”—a drastic expansion considering that the term “sexual orientation” has only appeared in one UN resolution, and even then not by consensus.

The report notes that countries must equally protect the human rights of all individuals including those that identify as LGBT, stating, “hundreds of people have been killed and thousands more injured in brutal, violent attacks.”

It does not shy away from the most controversial demands of the LGBT lobby.

It urges countries to recognize the preferred sex of individuals “upon request” regardless of their biological sex or marital status, to “enact comprehensive anti-discrimination legislation” on LGBT grounds in the private and public spheres, and provide “legal recognition and protection to same-sex couples” on the same basis as married couples even though it notes that “States are not required under international law to recognize same-sex marriage.”

Governments must “proactively” tackle barriers to “LGBT rights,” including “discriminatory attitudes and practices,” according to the report. It repeats the charge that the Catholic Church’s teaching on homosexuality contributes to “stigmatization of, and violence against, LGBT adolescents and children raised by same-sex couples.”

It calls for bans of “conversion therapy” for individuals who struggle with same-sex attraction, as well as bans on surgical interventions to repair the sexual organs of boys and girls born with anatomical defects, commonly called “intersex.”

It denounces 76 countries that penalize sodomy as being “in breach of international human rights law” and says all countries must grant asylum to individuals who identify as LGBT.

Recognizing some progress for “LGBT rights” globally, it does not mention opposing trends. In recent years, 13 countries in Europe have changed their laws and constitutions to reflect that marriage is only between a man and a woman.

The report notes how popular television shows now integrate “LGBT characters in a positive way,” and that celebrities are speaking out on the issue. At the same time, it finds that only 34 countries in the world grant legal status to same-sex couples.

Buried at the end of the report, it laments the absence of an office for “LGBT rights” within the UN human rights system. The establishment of such an office has failed repeatedly because of the lack of agreement among countries.

Like a previous report it is meant to update, the latest report mostly parrots the non-binding suggestions of UN experts, which have been widely discredited and ignored. UN human rights treaties were negotiated when a majority of countries in the world did not recognize the rights claimed in the report, and cannot be cited for their support.