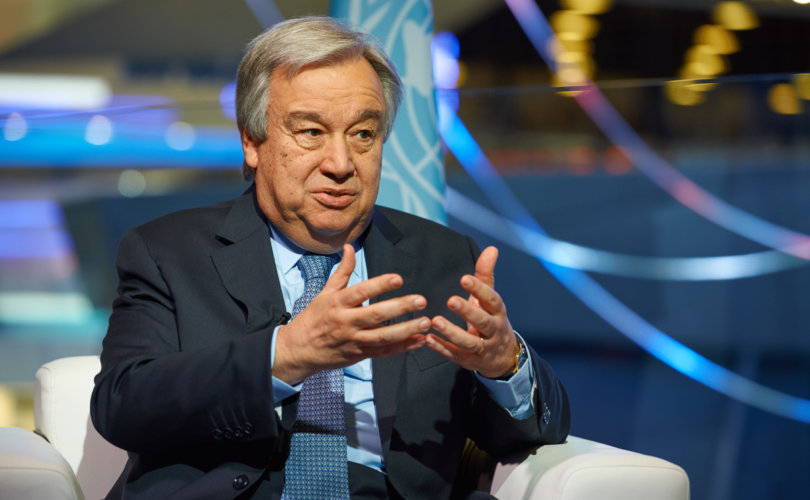 NEW YORK, June 26, 2020 (LifeSiteNews) — United Nations Secretary General Antonio Guterres is calling for a “multilateral” level of governance with the “teeth” to “function as an instrument of global governance where it is needed.”

“The problem is that today’s multilateralism lacks scale, ambition and teeth,” Guterres said during a Thursday press conference on the launch of the UN’s “comprehensive response to COVID-19” — the novel coronavirus that originated in Wuhan, China.

“And some of the instruments that do have teeth, show little or no appetite to bite, as has recently been the case with the difficulties faced by the Security Council.”

In the interdependent world of today, “national interests are not easily separated from the global good,” Guterres said.

Moreover, economic and social upheaval caused by the coronavirus pandemic “has laid bare severe and systemic inequalities” across the world, and underscored its fragility in the face of “climate crisis,” the threat of nuclear war, and “lawlessness in cyberspace,” he warned.

In the face of such problems, “world leaders need to be humble and recognize the vital importance of unity and solidarity,” he said.

“We must reimagine the way nations cooperate,” Guterres contended.

“We need a networked multilateralism, bringing together the UN system, regional organizations, international financial institutions and others,” he said.

“And we need an effective multilateralism that can function as an instrument of global governance where it is needed.”

He reiterated the same message at a virtual press conference on June 26 to mark the 75th anniversary of the adoption of the UN Charter in San Francisco.

To emulate those who seized on the Charter as the opportunity to “plant something new” after the depression and world wars, multilateralism must change, he said.

“We need to reimagine multilateralism, give it teeth to function as the founders intended, and ensure that effective global governance is a reality when it is needed,” Guterres stated.

“We must also bring others to the table in an inclusive and networked multilateralism, since governments are only part of today’s political realities,” he added.

“Civil society, cities, the private sector and young people are essential voices in shaping the world we want.”

To the globe’s “fragilities” he mentioned Thursday, Guterres added further troubles: widespread and increasing distrust of national governments, “inequality, discrimination, corruption and lack of opportunities all over the world – grievances that still need to be addressed, including with a renewed social contract.”

There’s also the possibility of another pandemic of “a new virus transmitted as easily as COVID-19 but as deadly as Ebola,” he warned.

And there is “the plague of misinformation” to be fought.

Guterres is looking forward to discussing these matters at the UN’s annual general assembly in September “in whatever format necessary,” he said Thursday.

“We absolutely must come together to reimagine and reinvent the world we share.”

This is not the first time Guterres, the former president of the Socialist International from 1999 to 2005, has used the coronavirus pandemic to push “global governance” in one form or another.

He proposed in March that 10 percent of the world’s GDP be put into an internationally administered fund and “coordinated stimulus package” to respond to economic and social fallout from the pandemic.

“If countries were to accept the plan, the United Nations or some similar coordinating agency would be given the equivalent of approximately 8.7 trillion USD, an unprecedented amount that would be 2,900 times greater than the UN’s annual budget of 3 billion USD,” LifeSite’s Matthew Cullinan Hoffman wrote at the time.

The plan would also “effectively place a global agency, presumably the UN itself, in charge of propping up the economies of the world during the coronavirus crisis.”

Guterres fully supports the “The Great Reset,” which the world’s globalist elites will be discussing in January 2021 in Davos, Switzerland, along with online participants from around the world.

The initiative has the objective of “rebuilding” the world’s economic and social system in order to make it more “sustainable.”

Indeed, the UN took a “giant step” toward global government with their 2015 proposal: “Transforming the World: 2030 Agenda for Sustainable Development,” E. Jeffrey Ludwig pointed out two years ago in the American Thinker.

He noted the similarity between the UN World Commission on Environment and Development’s definition of “sustainable development” as that which “meets the needs of the present without compromising the ability of future generations to meet their own needs,” and the “Marxist axiom that society should be organized around the idea of ‘from each according to his ability to each according to his needs.’”

Therefore, “Marxism is implicit in sustainability, but is nuanced by its alliance with seemingly scientific adjustments and goals related to environmentalism,” Ludwig observed.

“The one-worlders of the 1950s and early 1960s are now in the UN driver's seat, and they have made their move. The overlay of Marxist talk about ‘meeting needs’ has moved to center stage. The UN has assigned itself a time frame for moving forward in its plan for planetary hegemony,” he warned.

Guterres is also aggressively pushing a global right to abortion in the context of the coronavirus pandemic.

The Center for Family and Human Rights (C-Fam) reported in April that Guterres’ March appeal for $2 billion to help developing countries deal with the novel coronavirus repeatedly highlights “sexual and reproductive health and rights” as a priority area of food security and health policy.