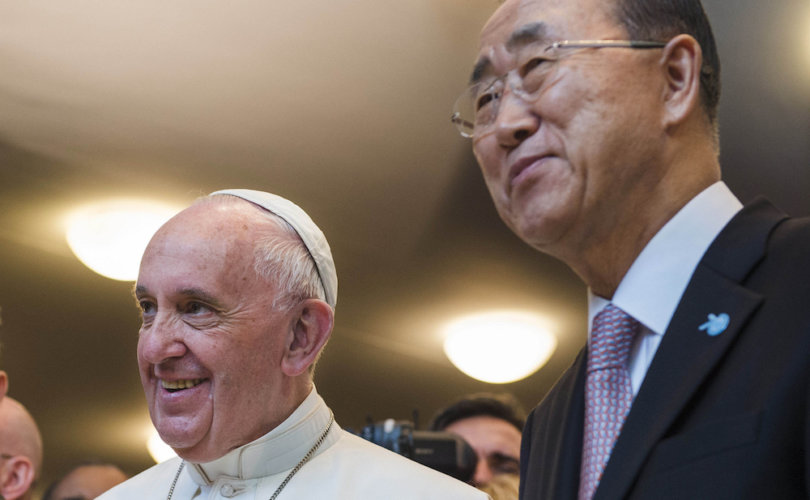 The Conference was organized by the Pontifical Council for Culture, the United Nations, and the International Olympic Committee (IOC).

After the meeting, Ban spoke with Vatican Radio about his get-together with the Pope. He emphasized the unifying aspect of sports that “transcends” all borders:

“It transcends all ethnicities and nationalities and whatever differences one may have. It can have the instant power to mobilize people’s energy and also their commitment for development. Togetherness and oneness can easily be realized through sports. In that regard, the United Nations is very much committed.”

With that statement, Ban reaffirmed point 37 of the 2030 Agenda for Sustainable Development stating that “sport is an important enabler of sustainable development.”

Ban Ki-Moon expressed his satisfaction about Pope Francis’ contribution to the UN globalist agenda. He specifically lauded the Pope’s call to foster sustainable development in an effort to protect the environment.

“For example, when world leaders adopted the 2030 Agenda for Sustainable Development, it was the Pope who urged and appealed to world leaders: He urged world leaders to have a stronger and visionary commitment for the world – people and planet – so that they can live in peace and prosperity through partnership,” the Secretary General added.

One of the goals of this agenda – tucked between its positive objectives – is gender mainstreaming. Point 20 states: “The systematic mainstreaming of a gender perspective in the implementation of the agenda is crucial.”

In his pronunciation, Ban declares that the Pope is a vehicle for the UN goals. He called Francis a “strong voice” helping “world leaders adopt [the] climate change agreement in Paris last year.” Ban Ki-Moon further commented, “I expressed my deepest admiration and gratitude to His Holiness during my audience with him.”

The meeting was seen by the UN chief as a symbol of interfaith collaboration: “The Holy See, the Vatican, Christianity, and other religions, they share common goals, visions, and values with the Charter of the United Nations: peace, respect for humanity, and human rights.”

The fact that the debate on climate change is linked to population control, as became evident in past events at the Vatican featuring Jeffrey Sachs, does not seem to be reason enough for the Vatican to clearly distance itself from the full implications of this agenda.

The understanding of “human rights,” of which Ban Ki-Moon speaks, may be quickly highjacked and abused by gender ideology proponents if the joint declaration proposed by 66 UN member states is adopted by the General Assembly and made universal by the UN. As of yet, it has not been signed.

After meeting with Ban Ki-Moon, Pope Francis greeted participants and athletes of the global conference in the hall of Paul VI.