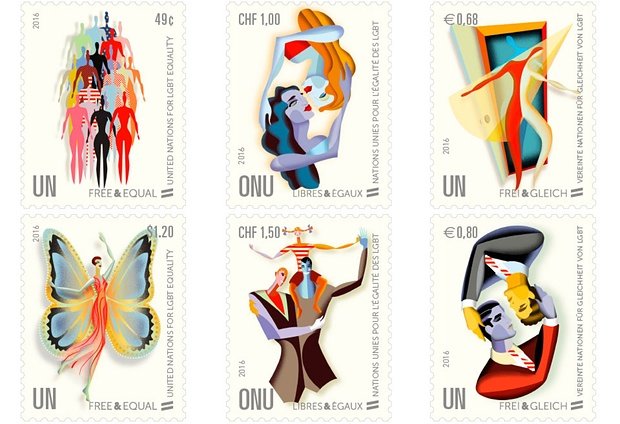 The UN stamps depict male and female same-sex couples kissing and embracing, a homosexual coming out of a closet, a gay couple carrying a girl on their shoulders, and a human butterfly figure representing a transsexual.

They were unveiled in the atrium of the General Assembly Hall before a massive painting of naked figures swaying around a fire and a nude statue of Poseidon with outstretched arm, gifts of Mexico and Greece—a location likely chosen for its suggestive qualities, as events are not normally held there.

UN artist Sergio Baradat who created the stamps in a colorful but static geometric rendition of the art deco style said he strived for the “beautiful, elegant, and loving.” He got emotional as he let the crowd understand that he identifies as LGBT and it was revealed that he originally had the idea of the stamps.

“Thank you for filling the UN with the music of love,” said Charles Radcliffe, head of the controversial LGBT Free and Equal Campaign, which the stamps commemorate.

Nearly half of all UN member states unsuccessfully sought to prevent the issuance of the stamps on the eve of their unveiling. Three powerful UN blocs, totaling 86 countries, sent letters to Radcliff’s boss, UN Secretary General Ban Ki-moon, including the Organization for Islamic Cooperation representing 57 UN member states.

The 54-member African Group denounced the event for “undermining the respected flagship of the UN” and “associating it with issues that do not enjoy universal consensus.”

And, the Group of Friends of the Family, numbering 24 countries and spearheaded by Belarus, Egypt, and Qatar, criticized the secretariat for promoting a “deeply controversial agenda” that “thwarts unity, dialogue, and mutual respect.”

Nigeria also issued a stern reprimand ahead of the unveiling in the course of the ongoing Commission on Social Development.

The three coalitions followed up with the secretariat this week after Ban Ki-moon failed to even acknowledge receipt of their letters.

“Why focus on LGBT?” Radcliffe asked at the event, challenging member states that questioned the appropriateness of the stamps and the event.

He answered by pointing to 76 countries that penalize sodomy. “Everyday the UN is working to get these laws repealed,” he said. He also claimed that every year hundreds of people who identify as LGBT die and thousands are hurt.

A Reuters UN correspondent who also spoke at the unveiling asked, “Who would have thought we could get so excited about stamps in the digital age?” She encouraged all in attendance to purchase stamps and “spread the message.”

The stamps capture the efforts of the “Free and Equal Campaign” a unilateral initiative of the UN Secretary General’s human rights bureaucracy that promotes a right to engage in sodomy, same-sex marriage, homosexual adoption, and other LGBT rights.

Since its launch in 2012 it has yet to garner substantial support from the full membership of the United Nations. No UN treaty includes LGBT rights or protects homosexual conduct explicitly or implicitly.