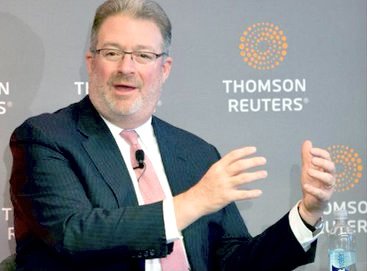 (LifeSiteNews) — The chairman and former Chief Executive Officer (CEO) of international news agency and “fact checker” Reuters is also a top investor and board member of Pfizer.

James C. Smith’s influential roles in both organizations “raises serious conflict of interest concerns,” the National Pulse remarked, because Reuters has not only given extensive coverage to Pfizer’s COVID-19 shot in particular, but it has overwhelmingly moved to “silence skeptics” of the Pfizer shots as well as other COVID-19 shots.

Smith’s roles raise added concern because Reuters, considered a leading international news source and boasting a reach of billions of people, brands itself as a news agency with “integrity” and “freedom from bias.” In fact, a 2021 article praises Reuters as one of the “Top 4 Unbiased Independent World News Sources.”

What gives Smith’s conflict of interest even greater weight is Reuters’ self-appointed role as “fact checker” of news. A survey of Reuters’ more recent fact checks shows the majority are dedicated to defending COVID-19 shots against questioning of their safety or efficacy, or of the motives behind their production and promotion.

For example, one recent “fact check” claims that “there is no evidence currently that COVID-19 vaccines are linked to an increase in sportspeople collapsing or dying due to heart issues such as myocarditis.” It made this claim despite its acknowledgement that “several studies do indeed suggest a link between myocarditis and the Pfizer/BioNTech and Moderna vaccines.”

However, more often than not, reports from people suffering injury after COVID-19 vaccination testify that doctors have either claimed their symptoms aren’t real or have dismissed out of hand the possibility of any link of those symptoms to COVID-19 jabs.

One would be hard pressed to find a Reuters “fact check” that admits any criticism of Pfizer COVID-19 shots, or COVID-19 shots in general, into its final analysis.

It is noteworthy that Smith also serves on the board of the World Economic Forum (WEF)’s Partnering Against Corruption Initiative and is a member of WEF’s International Business Advisory Boards of British American Business and the Atlantic Council.

Smith remains chairman of Reuters after having retired as president and CEO in February 2020, Pfizer’s website notes.