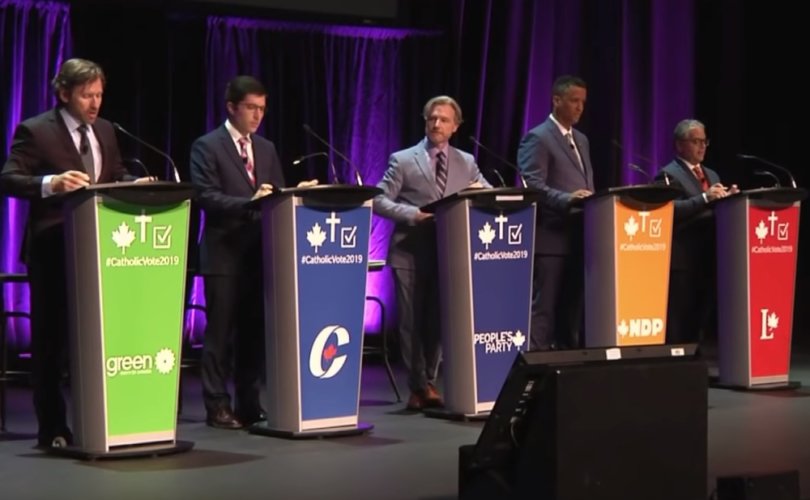 Representatives from Canada’s Federal Parties for the ‘Federal Election Debate from a Catholic Perspective’ event held at the John Bassett Theatre in the Metro Toronto Convention Centre in Toronto, Oct. 3, 2019.Archdiocese of Toronto / Youtube

TORONTO, October 7, 2019 (LifeSiteNews) — When it comes to the non-negotiable issue of abortion, there’s no reason Catholics should vote for any of Canada’s major parties in the October 21 federal election.

That was the takeaway from last week’s “election debate from a Catholic perspective” sponsored by the Toronto archdiocese.

Veteran news broadcaster Don Newman, who moderated the Oct. 3 debate, put the point bluntly after Conservative, Liberal, NDP, Green, and Peoples’ Party of Canada candidates answered the question: What would their parties do to protect human life from conception to natural death?

“Abortion is really, probably, I would say the single biggest issue for most Catholics,” Newman observed.

“You haven’t given much comfort to the Catholics in the room. And I’m wondering why then any of them should be voting for you. Any of you,” he added.

The remark was met by cheers, whistles and applause from the more than 1,000 people who packed the John Bassett Theatre.

The grim situation on abortion in Canada was summed up by Liberal Party candidate Francesco Sorbara: “Every party has taken the same position on that. From my understanding, no party will be reopening the debate on a woman’s right to choose in Canada.”

Although the Liberal Party is well-known as officially pro-abortion, Sorbara, a Catholic and member of the Knights of Columbus, took it one step further: “When it comes to women’s reproductive rights, I personally support a woman’s right to choose.”

But Genuis came under fire when he attempted to clarify whether Scheer would allow backbench bills on abortion to get to the floor of the House.

The People’s Party of Canada candidate David Millard Haskell argued that his was “the sole party” that “allows its candidates and future MPs to openly discuss and bring forward legislation on any issue of concern to Canadians, including abortion and euthanasia.”

His PPC colleagues in Red Deer, Alberta, have drafted “legislation to end third-trimester abortion and they will bring it forward as a private member’s bill,” he added, to a burst of applause and cheers.

Tory leader Scheer has “mimicked” Trudeau and “repeatedly insisted he will ‘oppose’ any attempt by his social conservative backbenchers to reopen the abortion file,” Millard Haskell said.

The “federal Conservative Party, at one time the protector of conservative values, has abandoned those values completely,” the PPC candidate for Cambridge-North Dumfries said.

But would Scheer allow his MPs to actually bring a pro-life private member’s bill to the floor of the house, asked Newman.

“I thought,” said the moderator, that Scheer “would allow private members bills on abortion, but he wouldn’t allow them to come to a vote in the House of Commons, which is kind of like having your cake and eating it too.”

Genuis flatly denied this was the case, and Newman asked him if Conservative MPs could introduce a private member’s bill on abortion and if it made it the floor of the House, would there be a free vote.

“Our party policy has been clear, and our leader has been clear,” Genuis said. “There will be a free vote for every member of our caucus if that issue is ever, as has always been the case.”

Sorbara asked Genuis if he was saying the Tories “would reopen the abortion debate in Canada, yes or no?”

“Our leader has been clear that a Conservative government will not reopen the issue and that individual Members of Parliament would have their freedom of conscience protected. I think that’s very clear,” replied Genuis.

Campaign Life Coalition president Jeff Gunnarson, who attended the debate, says Scheer has been clear he will ensure no pro-life private member’s bill will reach the House.

“They’re speaking doublespeak in order to confuse social conservatives into voting for them, thinking they’re pro-life,” he said. “They’re pro-life, but they will check that at the door, and it will not enter that House of Commons.”

Campaign Life advises people to vote for the candidate who is openly pro-life, irrespective of party affiliation, Gunnarson said.

As for the debate, Millard Haskell “was the most honest, the most forthright on our issues,” Gunnarson said. Moreover, Millard Haskell got the loudest cheers and applause of the night during the discussion on religious persecution when he warned against political correctness, Gunnarson told LifeSiteNews.

“What kind of bizarre idea is it that every other faith can speak its name but Christianity can’t? And this is a problem that not just hurts us here but hurts Christians worldwide,” Millard Haskell had said during the debate.

Cardinal Thomas Collins, Archbishop of Toronto, started off the evening by speaking about St. Thomas More, pointing out the one-time Chancellor of England did not separate his personal beliefs from his public life.

The format for the debate on Catholic election perspectives gave equal time to right-to-life issues, poverty, religious persecution, immigration and refugees, and the environment.

Pope St. John Paul II and Pope Emeritus Benedict XVI consistently taught that abortion is the most crucial moral issue of the day.

Benedict reiterated often that protection of human life from conception until natural death is a non-negotiable principle for Catholics in their engagement in public life.

John Paul II also repeatedly emphasized that opposing attacks on the sanctity of human life takes precedence over other endeavors, noting in Christifideles Laici that the outcry for human rights “is false and illusory if the right to life, the most basic and fundamental right and the condition for all other personal rights, is not defended with maximum determination.”