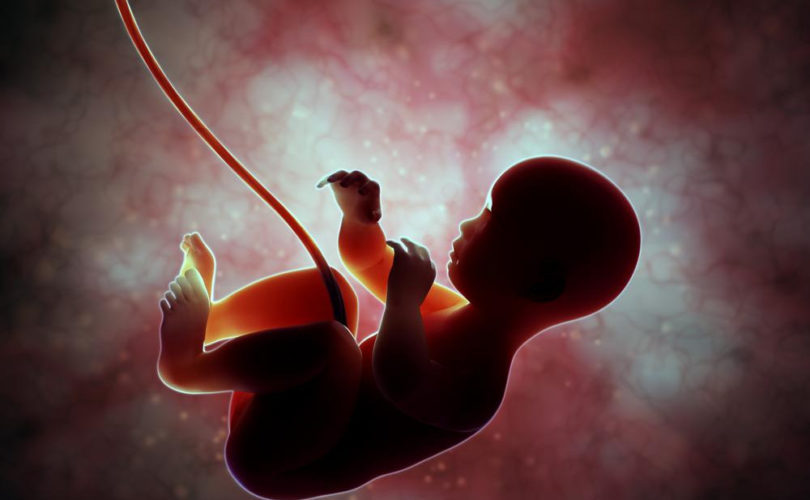 (LifeSiteNews.com) – A standard pro-abortion argument hinges on the premise that a baby inside his mom’s womb attacks her bodily integrity. The developing baby is seen in this light as an intruder, a parasite, a threat to the woman’s autonomy. From this perspective the pregnant woman is viewed as being occupied. The only way she can continue to exercise her interest in bodily integrity, the argument goes, is to be liberated through the termination and expulsion of the invader.

But science paints a vastly different picture about the actual relationship between a baby in utero and his or her mother, showing that, far from being a parasite, the unborn child can help heal his mother for the rest of her life, as beneficial cells from the child pass into the mother’s body during pregnancy

Science writer Jena Pinctott explores this relationship in her October 2011 book “Do Chocolate Lovers Have Sweeter Babies?: The Surprising Science of Pregnancy.”

Science has been studying the phenomena of fetal cell microchimerism for more than 30 years, after researchers at Stanford University were shocked in 1979 to discover a pregnant mother’s blood containing cells with Y sex chromosomes. Since women only have X chromosomes, they concluded that the cells must have entered into her body from the male baby she carried within her.

Drawing on studies in biology, reproductive genetics, and epigenetics, Pincott outlined in her book what science has learned since the Stanford discovery.

“During pregnancy,” she wrote, “cells sneak across the placenta in both directions. The fetus’s cells enter his mother, and the mother’s cells enter the fetus.”

Scientists have discovered, she said, that a baby’s fetal cells show up more often in a mother’s healthy breast tissue and less often in a woman who has breast cancer (43 versus 14 percent).

Pinctott pointed out that as the quantity of fetal cells in a mother’s body increase the activity of autoimmune conditions such as rheumatoid arthritis and multiple sclerosis decreases. She called the evidence “tantalizing” that fetal cells may offer the mother increased resistance to certain diseases.

One kind of fetal cells that enter into the mother’s body is the baby’s stem cells. Stem cells have what Pinctott calls “magical properties” in that they can “morph” into other types of cells through a process called differentiation. The baby’s fetal stem cells can actually become the mother’s own cells that make up her liver, heart, or brain.

In what any ethicist might declare to be legitimate ‘embryonic stem cell therapy,’ the baby’s fetal stem cells migrate to the mother’s injured sites and offer themselves as a healing remedy, becoming part of the mother’s very body. Pinctott writes that such cells have been found in “diseased thyroid and liver tissue and have turned themselves into thyroid and liver cells respectively.”

Genetics specialist Dr. Kirby Johnson of Tufts Medical Center, Boston, and professor Carol Artlett, a researcher at Philadelphia’s Thomas Jefferson University, back up Pinctott’s ideas. Their research shows that when a woman becomes pregnant she acquires an army of protective cells – what might be called a gift from her child – that remains with her for decades, perhaps till the end of her life.

Johnson and Artlett spoke to NPR’s Robert Krulwich in a 2006 interview.  In their research, Johnson found that a teaspoon of blood from a pregnant mother contained “dozens, perhaps even hundreds of cells… from the baby.” Science has shown that at the end of a mother’s pregnancy, up to 6 percent of the DNA in her blood plasma comes from her baby.

“One would expect them [the fetal cells in the mother’s body] to be attacked fairly rapidly. You would expect them to be cleared within hours, if not days. What we found is that that is not the case, not anywhere near the case,” Johnson said.

Artlett pointed out that even if a woman miscarries or deliberately aborts her child, the cells of the unborn child nonetheless remain with the mother, even for decades.

Both Johnson and Artlett defend the hypothesis that the baby’s fetal cells have a beneficent purpose, not to hurt the mother, but to protect, defend, and repair her for the rest of her life, especially when she becomes seriously ill.

“There’s a lot of evidence now starting to come out that these cells may actually be repairing tissue,” said Artlett.

During the interview, Johnson told the story of one woman who was admitted into a Boston hospital with symptoms of hepatitis. She was an intravenous drug user with five pregnancies on record: one birth, two miscarriages, and two abortions. Johnson speculated that she would be carrying a lot of fetal cells.

In the process of examining her, the medical team performed a liver biopsy. A sample of her liver was sent to a lab to see if any fetal cells had congregated in the diseased area of her liver. What they found surprised them.

“We found hundreds… and hundreds of fetal cells,” said Johnson, adding that they saw “literally sheets of cells, whole areas that seemed to be normal.”

Scientists are still trying to determine what causes the baby’s cells to work with the mother’s body in such a synergetic fashion.

Pinctott wonders how many people have left their DNA in a mother’s body. “Any baby we’ve ever conceived,” she concludes.

Pinctott sees something “beautiful” in this. “Long post postpartum, we mothers continue to carry our children, at least in a sense. Our babies become part of us, just as we are a part of them. The barriers have broken down; the lines are no longer fixed.”

Perhaps it is not at all poetic to say along with Pinctott that a baby lives a lifetime in a mother’s heart and mind.