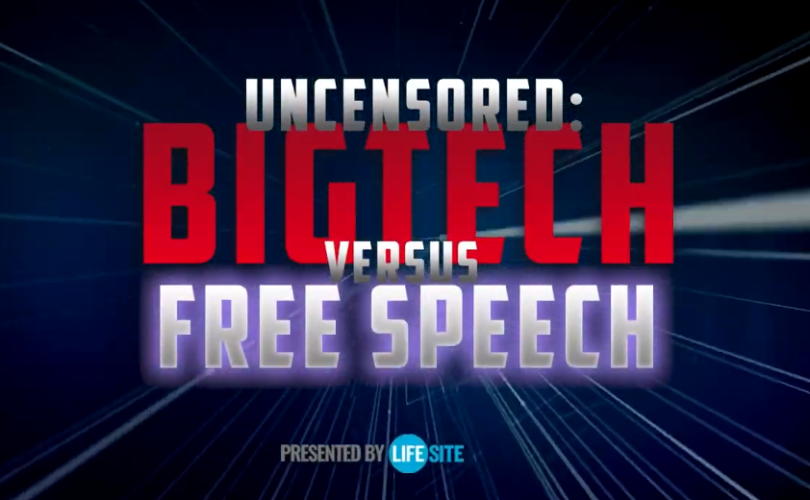 October 29, 2020 (LifeSiteNews) – Facebook, Twitter, Google, and other Big Tech giants want you to believe they don’t engage in censorship of any kind, and that they are simply upholding “community guidelines” to regulate “fake news” and “hate speech.”

We know now that this is all a lie. LifeSite has been working hard to shed light on Big Tech corruption these last two months.

Our explosive original series, Uncensored: Big Tech vs. Free Speech, blew the lid off the industry’s liberal bias. You can watch a short documentary of our reporting below. You can also read about our reporting here. Scroll down to the bottom of this article to watch our interviews with each activist we sat down with.

Thanks to testimonies from leading pro-life and pro-family voices, we showed firsthand just how these unaccountable corporations spy on, manipulate, and censor their users.

In our documentary, we heard from Brigitte Gabriel the founder of ACT for America, Brent Bozell from the Research Media Center, Allison Centofante from Live Action, Prudence Robertson from the Susan B. Anthony List, Allum Bokhari from Breitbart, and Eric Cochran from Project Veritas.

Although each has experienced the wrath of Big Tech in different ways, their resounding message was the same: these companies cannot be trusted to ensure our freedoms.

“The algorithms that run so much of our lives, that determine whose political movement is going to be successful … are all programed by critical race theorists. That’s digital totalitarianism,” Bohkari declared.

Cochran, a former Pinterest engineer who blew the whistle on how pro-lifers are censored, agreed with Bohkari.

This is a battle “about free speech, about a basic American principle.”

Alison Centofante from Live Action told our viewers that, “these social media companies are suppressing your ability to see [pro-life truth], to see and know about what abortion really does for a child. … The American people are going to get fed up with this continued suppression and look to D.C. to do something.”

Brent Bozell from the Meda Research Center likewise said that Big Tech giants “believe that it's their responsibility to fact check, to make sure that the public isn't told things that it should not be told.”

Below you can watch our stand-alone interviews with our all-star lineup of guests. No one in conservative media has ever done this before.

Brigitte Gabriel shares the story of how the Souther Povetry Law Center labeled her organization a hate group and how they successfully cancelled her fundraiser at Mar-a-Lago.

Brent Bozell lays out how Big Tech manipulates search engine results and why conservatives need to break up their monopolies.

Prudence Robertson from the Susan B. Anthony List shared how Big Tech’s censorship of pro-lifers makes them “complicit” with the abortion industry.

Eric Cochran was an engineer working at Pinterest who blew the whistle on blatant censorship written into the code at Pinterest that blocked users that shared Biblical and pro-life messages.

LifeSite is dedicated to speaking the truth and getting the pro-life, pro-family message out in these and at all times. We thank those who helped make this series a reality.