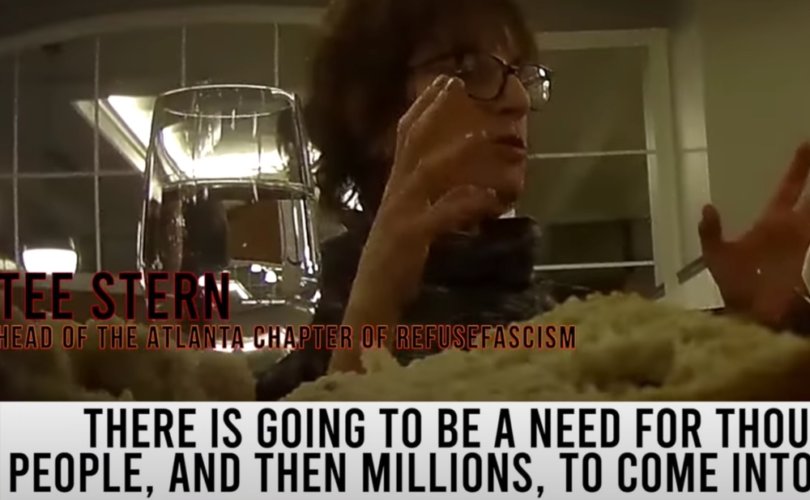 UNITED STATES, June 12, 2020 (LifeSiteNews) — A new video from Project Veritas shows an “anti-fascist” group, whose main aim is to take down the Trump administration, admitting to having received funding from globalist billionaire George Soros.

Tee Stern, head of the Atlanta chapter of Refuse Fascism, told an undercover journalist that their organization had received funds from Soros when it was focused on hosting events in support of abortionists.

“We did apply for a grant from Soros at one point, a long time ago when I was doing more abortion rights and defending clinics,” Stern said.

“We actually did get a grant from them [Soros] around – we started a thing called a National Day of Appreciation for Abortion Providers.”

In the same recorded interview Stern spoke of the group’s aim to topple the Trump administration through street protests.

“The ultimate vision is to…for people to break with their comfort and come into the streets day after day, night after night into the hundreds of thousands, into the millions: and not leave until they have to step down,” Stern said.

“The main about this, is that we see that this is not going to happen through ‘normal channels’ because we are living in abnormal times, and the way we see this is that there is going to be a need for thousands of people and then millions, to come into the streets, and demand that the Trump-Pence regime must go.”

The Project Veritas video also includes footage of an undercover journalist meeting with Refuse Fascism’s national organizer, Andy Zee, talking of his goal to turn major American cities into centers of “non-violent demonstrations” that “[dominate] the national news” and act as a “very disruptive force.”

Project Veritas has likened Refuse Fascism to the militant far-left group Antifa, which Trump has announced he will declare as a terrorist organization. The group is believed to have played a key role in the wave of violent riots following the death of George Floyd. Refuse Fascism insists that they are a distinct group from Antifa, but the two groups have cooperated at protest events in the past.

Last week Project Veritas released undercover footage from Antifa fight-schools where instructors encouraged students to “practice things like an eye gouge” and to think of conflict situations in terms of “destroying your enemy.”